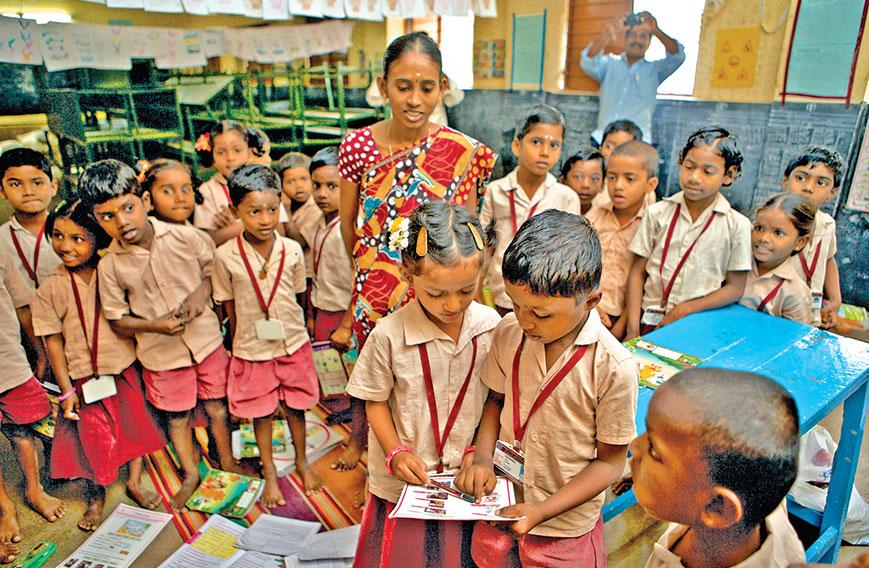 The limits of best practices

During 2001-02 the Azim Premji Foundation launched a programme, the Accelerated Learning Programme, to support the academic achievements of children who were enrolled in government schools after a bridge programme conducted by the state government. Before enrolment, the children were to be assessed for their competencies in order to be placed in the appropriate grades. However, the last-mile execution did not follow the pre-determined path and the children got enrolled simply in their age-appropriate grades. Illustratively, if a child was 10 years old, he/she got enrolled in Class 4 — whether or not he/she possessed Class 4 competencies. This created the risk of children not understanding what was happening in the classroom and dropping out. Therefore, in collaboration with the state government, the Accelerated Learning Programme was launched in 1,016 schools across 46 blocks of seven districts of the state.

The programme involved a rigorous teaching-learning process with identified children with the help of an additional teacher appointed by the Foundation. The teacher was well-equipped to bridge the competency gaps of such children. The programme succeeded in demonstrating that almost 75 percent of the students achieved the expected grade-appropriate competencies in nine months. There was an explicit understanding with the state government that once we established the principles and the process, the government would implement the same in all schools across the state. The government even printed large numbers of copies of the work-books designed by us. But then the leadership of the State Education Department changed and there was no progress.

The Accelerated Learning Programme provided us with a lot of learning and insight into the realities of government schools.

One of the important learnings was that, while constraints such as inadequate number of teachers, multigrade teaching-learning, poor infrastructure, the highly disadvantaged socio-economic background of the children, absence of toilets and drinking water facilities and so on were common among the schools, children in some schools were learning very well. In order to understand this further, we launched another programme in collaboration with the state government titled Learning Guarantee Programme (LGP).

While the initial programme objective was to assess the learning, share the results of assessment and publicly felicitate schools that are doing well, it was based on a solid assumption that once we demonstrated a method of competency-based assessment that points to classroom reforms, the state government would implement best practices across the state in its own ways.

We decided to do this by assessing the enrolment, attendance and learning levels of the schools (Classes 1-4) that volunteered to participate in the programme. A massive exercise ensued wherein we communicated the programme details to all the 9,200+ government schools in the seven districts, in a flat 45 days. To voluntarily participate in the programme, the schools were required to send their consent after obtaining the signature of the head teacher and the president of the school management committee. Over 6,500 schools sent their consent in writing. The next step involved the schools doing self-assessment with the help of the assessment tools provided by us. After this step, about 2,000 schools remained in the programme and communicated to us the period during which they would be ready for assessment by us.

In the three years of the programme (2002-05), we assessed over 600,000 students. At the end of each assessment, child-wise, grade-wise and subject-wise results of the assessment were shared in the most transparent manner with teachers, head teachers and members of school management committees. This was a gold mine of data for schools to act upon since the results threw up the strengths and weaknesses of the students’ learning. Schools where more than 60 percent students possessed expected competencies were publicly felicitated in the presence of dignitaries such as the education minister, the education secretary and the chairman of the Azim Premji Foundation.

We hoped that the schools that did not get felicitated would make an effort to reach out to schools that performed well — to learn from them and improve the learning in their schools. In many places, the performing school was a mere half-kilometre from the non-performing one. We realised and learnt many things. The two most significant things we learned were (a) very few schools (if any) really made efforts to learn from other schools (b) very few schools acted upon the data they received from us of the competency achievement analysis of their students.

The programme did not envisage any intervention by the Foundation but expected the schools and the government education department to act, using the data. Overall, the teachers realised (a) they could not simply teach and move on, they had to ensure that a majority of the children developed the expected competencies (b) competencies could not be achieved by using the rote, memory-based teaching practices (c) focus on children who did not perform well in the assessment was necessary.

Some schools began special coaching for the students beyond the school hours. However, some schools did not use the assessment results at all. In extreme cases, we found the assessment results simply dumped inside the school toilet without even being opened. The state government found the programme very useful to promote competency-based learning across schools and even established an organisation to evaluate all schools using the competency-based assessment tools. This lasted about two years; with the passage of time and changes in education leadership, it faded away.

The fact that practically no school made an attempt to learn from a nearby school that was performing better, once again established that ‘best practices sharing’ is an ineffective procedure. This is despite the fact that the performing schools were publicly felicitated and were known to all other schools.

Repeated joint programmes with the state governments that succeeded in establishing robust principles did not lead to sustained follow-up action by the State. Thus, the theory of demonstration at scale did not work.

Both at the central and state government level, several programmes have been launched to promote such demonstration. Illustratively, there are about 600 Jawahar Navodaya Vidyalayas and 1,100 Kendriya Vidyalayas that are mostly of very good quality and are sought after by guardians to admit their wards. Besides, close to 15 percent of total government schools are of good quality. However, the remainder do not usually make any effort to learn from these schools.

Learning from best practices and implementing them in an organisation/ institution is a complex exercise. Every best practice has a social, economic, cultural, ecological and human setting. Unless these settings are thoroughly understood and contextualised, best practices often fail. It is in this context that centre-promoted concepts such as ‘model schools’ that are resourced differently than an average government school, fail to serve their purpose. If we want best practices to be scaled, we have to create level playing fields, understand differences and similarities, and create enabling conditions to address the ‘not invented here’ syndrome among people.