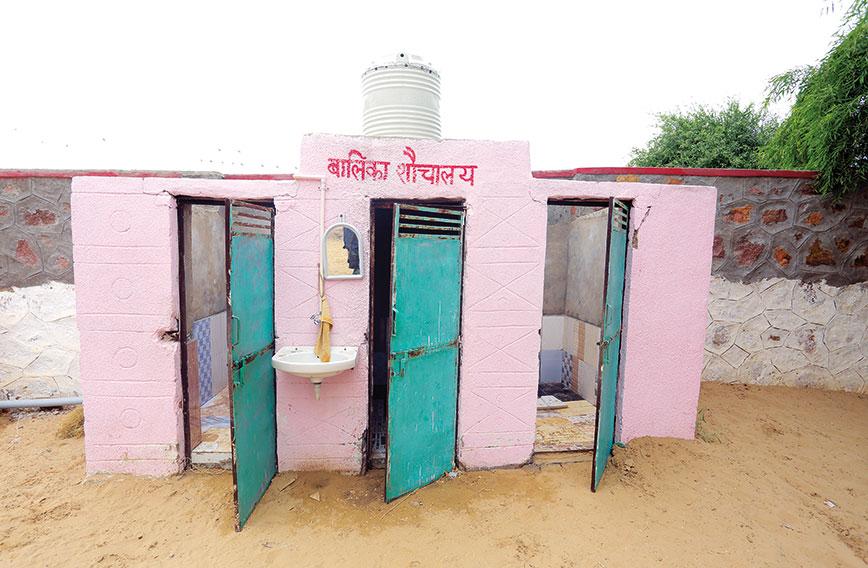 For any infrastructure to be maintained well, we need a budget and a system

When I was a child, a cousin posed a riddle to me. He asked: “How many rotis can you eat on an empty stomach?” I enthusiastically replied: “Seven rotis!” My cousin laughed wickedly and retorted: “Nobody can eat more than one roti on an empty stomach because after one roti, the stomach is no longer empty.”

Many times, I have found even the toilet attached to the office of the principal of a District Institute of Education Training (DIET) unusable — because the pipe of the urinal is broken and the toilet does not have water.

Many states have enterprising bureaucrats who launch very ambitious initiatives. They invite some good people from across the country to join these missions and they hold several meetings to finally draw up strong recommendations on several developmental issues.

Sunidhi (name changed) was one such bright mind who was appointed coordinator of such a committee in a particular state. She was well-meaning, energetic and knowledgeable about the work entrusted to her. During one of my visits to the state capital, she was very keen to meet me. But I was tied up with our own field meetings so she offered to meet me in our office, over lunch. We met briefly and she described the new, large (125,000 square feet) building they had commissioned which she said I must visit and see. I smiled. She asked me the reason for my smile. I asked her whether she had visited the toilet in our rental office premises. She confirmed having used it and being pleasantly surprised by its cleanliness. I said that even if she visited us 10 years later, our toilet would still be the same. And the reason I smiled was that I knew that the government was famous for creating excellent infrastructure but invariably failing to maintain its premises. She concurred.

Many of the Azim Premji Foundation’s Teacher Learning Centres (TLCs) are on government premises. The government is kind enough to allow us to use a few rooms in some of their large schools or offices to create a learning and resource space for teachers which they voluntarily visit after their working hours. One such TLC is situated in a Block Education Office. The toilet of this TLC is on the ground floor — next to the toilet of the Block Education Office. I was very amused to note that most of the government office staff preferred to use our toilet because it was cleaner and more comfortable.

What is the difference in the toilets? There are three critical points: First, we have marginally repaired the tiles and fixtures. Two, we have a housekeeping person who visits and cleans the toilet twice a day. And three, probably the most important, we have running water.

For any infrastructure to be maintained well, we need budgets, a system of supervising maintenance and some decent culture for appropriate usage of the facility. In my extensive travels across various states, I come across schools, DIETs and Block Education Offices that do not have basic facilities. It is high time we fix this problem of inadequate or substandard amenities in government schools and offices. It is high time we stop treating some 200 million children in government schools as second class or third class citizens of this nation. Here are some basic issues to be fixed:

In school after school, children are made to sit in classrooms that are unsafe, unhygienic and not conducive to learning. Walls are peeling off, painting has not been done for years, benches do not exist, even the floors on which children are required to sit are uneven and uncomfortable. The quality and adequacy of education access needs dramatic improvement. We must provide safe, hygienic, cheerful, well-ventilated, non-leaky classrooms — at least one classroom per grade. We must provide decent benches, blackboards, painted walls and ceilings. The Right to Education Act has defined certain infrastructure and facilities in schools which must be provided for meticulously. Boys and girls must have separate toilets with running water at all times.

The Right to Education Act has very clearly prescribed an appropriate teacher- pupil ratio for different levels of education. While at the state level, the teacher-pupil ratio appears to be within prescribed limits, at school level, it is quite inadequate. In several districts of various states, as many as 40 percent of schools are single-teacher schools and almost 10 percent have no official teacher at all. The Block Education Officers make unofficial arrangements to ensure that the schools have at least one teacher. As a result, almost 70 percent of our schools have unplanned multi-grade teaching-learning situation. If we have to ensure the prescribed teacher-pupil ratio, thousands of additional teachers will have to be appointed. And this needs significant commitment of budgets.

Research has repeatedly established the criticality of school leadership in ensuring the quality of schools and yet a very large percentage of schools either don’t have a principal or have a temporary in-charge. The same is true of principals of DIETs in several districts. Without the appointment of principals, the DIETs are rudderless. The role of DIETs is critical for improving the quality of education in a district. That purpose is not achieved owing to several DIETs not having the prescribed strength of faculty or prescribed training and residential facility including IT support and libraries.

The mid-day meal programme was made mandatory in 2006 and existed even before that. The primary objective was to provide hot, cooked meals to every child covered by the scheme to ensure 450 calories of energy, 12 gm of protein and micronutrients. We need to seriously evaluate the effectiveness of the implementation of the mid-day meal programme including the adequacy of the budgets provided. Thousands of school principals spend money from their own pockets to buy vegetables, condiments and other material needed for providing a decent meal to children. The reimbursement of such expenses is delayed for several months. The overall budgets of this scheme simply do not allow its objectives to be achieved.

How can we aspire to achieve quality education in India if we don’t address these basic issues and don’t create enabling conditions for schools to achieve their education goals? How can we sustain a highly inequitable situation where about 25 percent of schoolchildren in the country study in superior conditions, including air-conditioned schools, and 75 percent of our students suffer the ignominy of pathetic conditions in which they receive education?