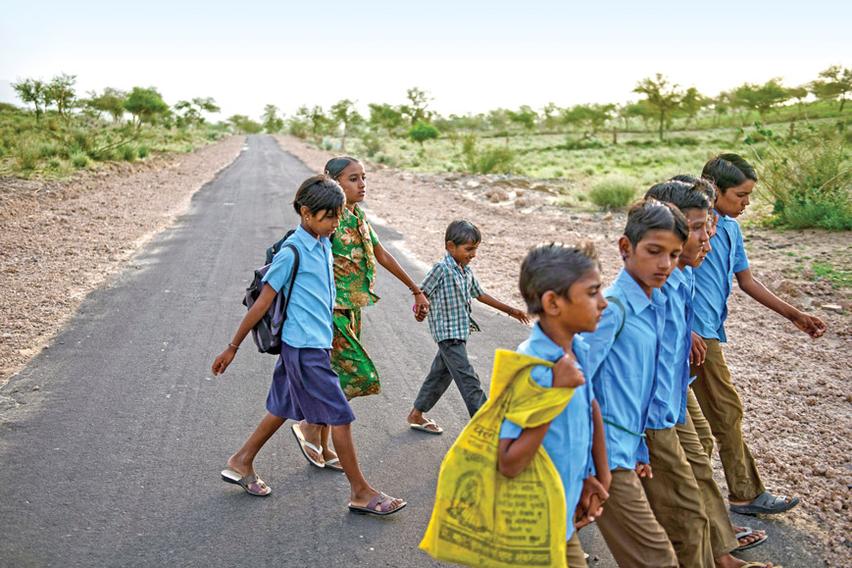 On several occasions, when I tell my former classmates and relatives that I am travelling in Barmer, many of them ask, “Where is Barmer?” One even asked, “What is Barmer?”

Very few know that this district of Rajasthan, with around 6,000 schools and 21,000 teachers, is the second largest educational district in the country. The importance and sensitivity of this district lie in that, like Jaisalmer in Rajasthan and Kutch in Gujarat, it shares a border with Pakistan. A large part of the district is desert and the only change that the residents have seen during the past two years is a lot of greenery — thanks to the rain gods!

On our itinerary was a wonderful school — commended as the best government school in Barmer district, based on some criteria adopted by the state. My colleague in Barmer chose this school for a visit for several reasons and one of them was our association with it for the past 18 months. The key feature was the head teacher of the school who had almost single-handedly developed it to its current status.

The most striking feature of the school was its ambience — a well-manicured entrance flanked with green shrubs, a clean environment, three lovely leafy trees on the premises and an eye for detail that was visible everywhere such as positioning the dustbins at the right places to well-painted toilets and cleanliness around the place where the midday meal is prepared, and so on.

The large ground was full of desert sand but levelled in a manner so that children could easily use the ground for sports and other activities. The children were full of energy, with nicely tailored, clean uniforms and something that you don’t see in many government schools — a properly worn tie on each child. One could observe a good balance of freedom (noise and free speech) with discipline in the way the children responded to the instructions of the head teacher. The teaching-learning material developed by the children along with their teachers was displayed on the walls of each classroom. Also displayed was a board indicating the grade of the class in a unique manner. The school had about 20 nail cutters that were used to ensure that children cut their nails each week.

The school has around 160 children in eight grades. Due to its reputation, all the children in a 10-km radius have withdrawn from private schools and enrolled in it. The head teacher presented some cultural performances and requested me to interact with the children, especially the members of the Baal Sansad (Children’s Parliament — consisting of a Prime Minister and his Cabinet of Ministers).

A Class 5 boy presented a traditional Rajasthani folk dance with several acrobatics (such as holding a moving wheel in his teeth while dancing). He wore make-up and was dressed as a girl in a bright red sari. I was told that the reason for this was that the boy excelled in dance and the school was keen to break the stereotype that such dances can be performed only by girls.

The interaction with the members of the Baal Sansad was reflective of the deeper involvement of the students in the day-to-day management and affairs of the school.

The moving spirit behind the school is the head teacher of the school alongwith his team of six other teachers. Despite taking a lead role and being fairly assertive during the proceedings, the head teacher was humility personified. He did not speak too much of what he has contributed over the past six years to the school. Nor did he volunteer to share how he was instrumental in the transformation of the school since taking over. The only statement he made, quite spontaneously, was, “Every night, before I sleep, I plan what I will do in the school the next day.”

At the Azim Premji Foundation we have, for long, held a view that the leader of the school has the potential to make or break the school. This has been a fully  researched position that I experienced once again during the three hours that I spent in this school.

Having resolved its basic infrastructure and ambience issues, was everything right about the school?

We found that it was an ideal candidate for improving its academic processes and becoming a school that conforms to the standards of quality enunciated by the national education policy and curricular framework. We shared this with the head teacher and he readily agreed that the school needed help in developing appropriate competence among teachers to move towards teaching-learning practices that would enable the school to have child-focussed education. While the teachers were sincere, their teaching was rather traditional – leading to a focus on rote memory-based learning.

The positive and sincere attitude of the teachers showed their potential for being developed as resource persons for the entire block. One of the most critical factors in enabling teacher professional development in our country is the non-availability of Teacher Educators competent to work with teachers in a meaningful way. Such Teacher Educators need to have important attributes such as alignment to the overall education perspective envisaged by the national curriculum framework, subject matter expertise, ability to work with people and very good facilitation skills. If teachers and head teachers from schools that have demonstrated how to run a good school serve this purpose, it will be ideal since they would carry immense credibility with the teachers.

Given our scale of schools and teachers, current institutions like SCERT, DIETs, and Block / Cluster Level Resource Persons are grossly inadequate to contribute effectively to teacher professional development. We need a much larger number of competent resource people. Among the seven million teachers that we have across the country, at least 10 per cent are well motivated and highly competent to be quickly developed as Teacher Educators. This translates into almost 700,000 teachers with potential to be developed as resource people.

We need different approaches to address the huge challenge of lack of Teacher Educators who could contribute to teacher capacity building and the kind of school that we visited in Barmer can be a good source for such teachers.