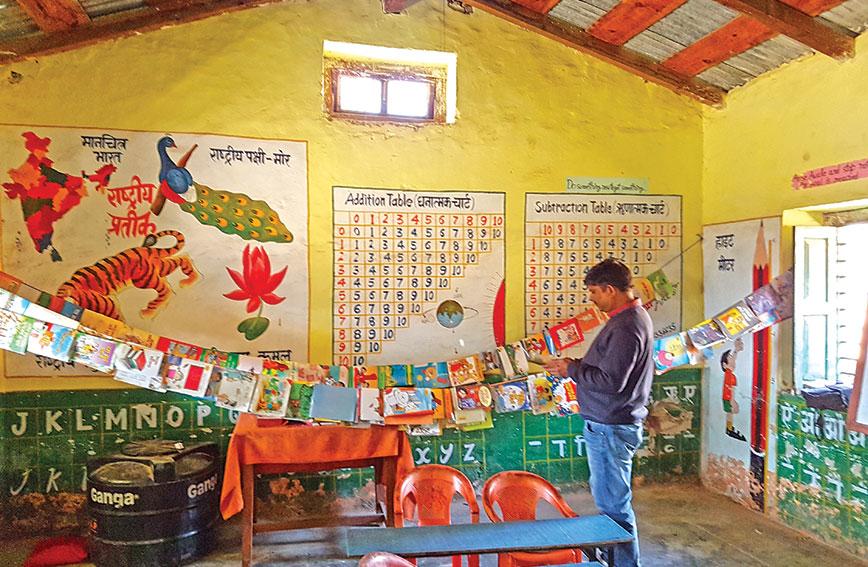 No shortage of enthusiasm

The journey from Bhimtal to Pithoragarh was punctuated by beautiful burans trees (Rhododendron arboretum), the state flower of Uttarakhand. My colleagues in Uttarakhand described various facets of the flowers including how useful and tasty their juice is. Just the previous week I had witnessed the colourful state flower of Rajasthan — rohida (Tecomella undulata) — in Barmer district and my colleague there, who was from Uttarakhand, had told me that on the coming Uttarakhand visit, I would be seeing burans flowers in abundance. I promptly sent my pictures of burans to my colleague in Rajasthan.

But for a few stretches under maintenance, by and large the roads were of high quality though very narrow and dangerous in parts. Whenever I travel in the hills, I always wonder how the Border Roads Organisation (BRO) maintains the roads despite huge challenges — frequent landslides, rain and the vagaries of climate. After arduous travel of about two and a half hours, my colleague suddenly spotted a motorcycle belonging to one of our team members outside a school he was familiar with. He phoned him and confirmed it. After seeing pictures of the classrooms on his mobile and some hesitation (since we were delaying our arrival at Pithoragarh), we agreed to visit the school. What attracted me the most at the outset was the school’s absolutely stunning natural environs and the slogan on its entrance: ‘Shiksharth Pravesh — Sevarth Prasthan’ (loosely translated as ‘Enter for education — Depart to serve’).

The school had two distinct buildings — the first one for higher primary and the other for lower primary. It was lunchtime and the children had just begun their meal. Asked what the menu was, the response, in a chorus, was, “Dal-bhat.” When we asked for the difference between ‘dal-chawal’ and ‘dal-bhat’ the instant response was, “Chawal is uncooked rice, bhat is cooked rice.” Children in both lower and higher primary were energetic, smart and highly responsive. The toilet was among the cleanest I have seen in government schools. The credit for all this obviously went to the two teachers. The teacher in lower primary had been attached to the school for the past four years. A longish conversation with her brought out her deeper engagement with the children and her burning desire to see her children develop differently.

The impressive teaching-learning material in the classrooms and the nicely preserved notebooks of students with immaculate cursive English writing by Class 2 and Class 3 students was truly impressive. It couldn’t have been possible without intense effort by the teacher. The only dark lining to the silver cloud was that the teacher felt she now needed to be transferred to a school whose location was more convenient. She was very unhappy that she had no method of addressing her grievance.

On our journey the very next day from Pithoragarh to Munsiyari, on a wet, cold day, we had difficulty finding our scheduled halt at a place called Chhoribagari where our team in Pithoragarh district was holding a workshop with a group of over 30 teachers from schools in the surrounding block. We had to backtrack for about five kilometres to find the place — a primary school — about 400 metres away from the main road. Braving the rain, the distances and freezing wind, 27 teachers along with the block functionaries were present. When we reached, they were summarising their experiences in the workshop. The rain had intensified but I did not see any worry about the journey home on any face. They appeared very keen to continue the interaction.

Heavy snowfall greeted us at Munsiyari where the temperature was –2 degrees C. A quick intake of onion pakoras and several cups of hot ginger tea helped cope with the spine-chilling cold, since the hotel had no means of heating the rooms. Our team members in the district were busy contacting the teachers for the next day’s meeting, scheduled for 11 am, and appeared unaffected by the weather conditions. Everything depended on the extent it would snow overnight. The news the next morning was that three of the five main roads from where the teachers were to travel were cut off due to snowfall.

Despite the odds, around 50 (of the 65 invited) teachers and education functionaries made it and the discussion began just about 10 minutes past the scheduled hour. There were WhatsApp messages from many of the absentees about their inability to reach due to road closure. The discussions revolved around unique experiences and challenges with children and in schools. The emergent tone was centred on teachers’ role in shaping the development of children so that they become responsible members of society. Most teachers raised a common issue — that it was difficult to seek cooperation from parents since they were either too occupied with their livelihoods or were unable to contribute to their children’s education due to their own illiteracy.

Someone mentioned that I was a member of the Central Advisory Board of Education (CABE) and some of the teachers thought it was the right forum to state their difficulties and understand the policy issues of the government. The first question related to the difficulty emanating from paucity of teachers: “Why can’t we get a separate classroom for each grade and a separate teacher for each classroom?”

Another question was about creating a strong network with parents to be able to work with the child in a cooperative manner. There were the usual discussions about examination orientation in our current education system, the issues arising due to the no-detention policy, the strong need to build capacity for continuous comprehensive evaluation, and so on. Many of them complained about the time they spent on midday meals, unrelated surveys and non-academic
tasks. They raised issues of non-implementation of the government’s own commitments, policies and programmes. Most of their questions, clarifications and indirect demands were extremely relevant and reflected their commitment to doing something good.

As a responsible CABE member, I attempted to explain the government’s constraints, efforts being made to change the quality of teacher education, committees appointed for various issues involved in improving the condition of government schools across the country, and the like. While they were appreciative of such efforts, they were at a loss to understand how various actions would unfold unless the government almost doubled the budget allocation for education.

In all the three interactions I had during the week, I did not see any deficit of enthusiasm among the teachers and education functionaries despite adversities. And this is not the first time I was experiencing such energy and commitment. In many ways, it was consistent with the general experience in most organisations — most employees join as ‘racehorses’ — fired up and committed to doing something meaningful; however, the bureaucracy in the organisation, the disabling conditions, lack of resources and lack of opportunities convert them into ‘donkeys’. In addition, the persistence of such conditions can seriously affect their motivation and create negative forces.

While we do have to address fundamental issues like pre-service teacher education, in-service teacher development, budgets for education and a plethora of other issues, we should be happy that there is no dearth of enthusiastic teachers and education functionaries in our education system. It is a question of how we nurture them to become the proverbial ‘racehorses’.