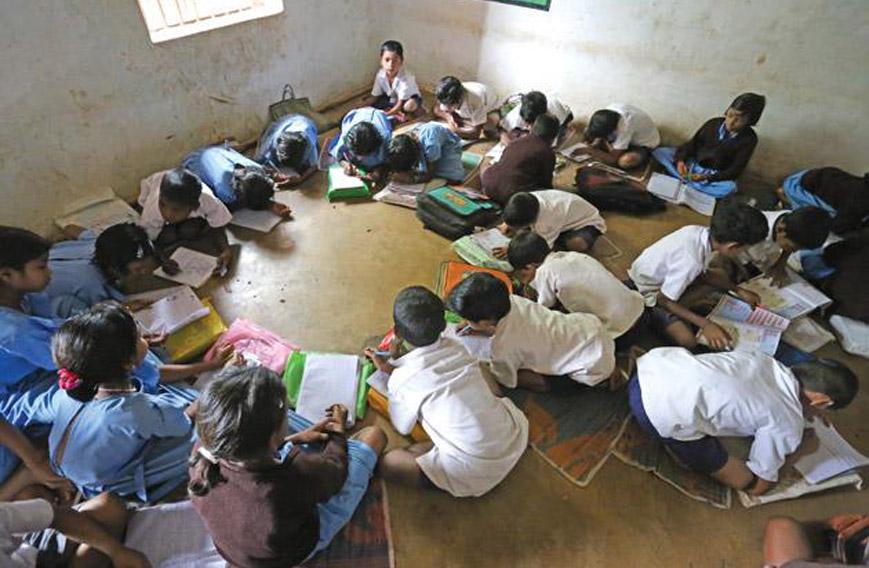 He is one of the best government teachers in that block, situated in the beautiful foothills of the Himalaya. His school is situated in a remote place (about 30 km of winding difficult road from the block headquarters) and after reaching a point, it took us a good 15 minutes of a difficult walk down the hill to get to the school. The climb down is dangerous even for a fit person. However, that is the only way the villagers, children and the teacher can reach the school and the village beyond it. You can imagine the plight of these people when it rains or snows.

The school has just 16 children in Classes 6, 7 and 8 and over 60 per cent of them are girls. The relationship between the lone teacher and the children has to be seen to be believed. And the same is true for the energy, understanding and keenness of the children. This teacher had singlehandedly succeeded in developing a desire among the children to learn and discuss a lot of things on their own.

Inside the school, a group of girls was practising dance all by themselves (one of the girls was playing the dholak) for the upcoming festival performance. The small midday meal room was neat and clean, and the woman cook was a sincere and methodical person.

The teacher has exemplary ownership of everything that happens in the school. One of the issues he is struggling with is how to manage the school when he is away from it for official reasons. He has temporarily addressed the issue by accepting the voluntary services of a 21-year-old girl from the same village, who is very keen to teach and help. Though one more teacher was approved for the school, the appointment has not been made for over two years.

We were wondering what would happen to the school if the girl gets selected for a job in the Home Guards or the police where she has applied.

When I was talking to a Block Education Officer about how he managed with so many single-teacher schools, he promptly said, “Forget the single-teacher schools, I have 127 schools in my block with no teachers.” Though I am quite well acquainted with the reality, it still shocked me. In many states, new teachers have not been appointed for over five years — shrinking the teacher strength drastically.

The same situation prevails in many academic institutions in the states. The approved number of Cluster Resource Coordinators and Block Resource Persons is not appointed. The District Institutes of Education Training (DIET) — an important institution to provide support for professional teacher development — are largely in disarray with several issues plaguing them. Approved funds are not disbursed until the end of the year. In some cases, they are not disbursed at all. Buildings are dilapidated due to lack of funds, on an average only 50 per cent of the approved strength of faculty members are appointed. That too an inappropriate mix of subject matter resource persons. The total facilities available in most DIETs are not at all conducive to quality professional development of the teachers in that district.

What is appalling is the attitude of some of the senior bureaucrats towards DIETs. When I raised the issue of the current status of DIETs in the country with a very senior (and committed) bureaucrat in Delhi, she asked, What is the issue? I cited non-availability of approved strengths of faculty members. She vehemently replied, “We should not appoint more people in the DIETs.” Surprised, I asked why. Her reply was, “Because they don’t work.” I found it bizarre. I said, “In that case, we should abolish the institutions and provide alternatives.” The discussion did not go anywhere.

Every committed Chief of a State Education Department laments the lack of quality people in all these institutions, but nobody shows the initiative of starting a process to create such quality people over a period of time.

Practically all politicians and senior bureaucrats know that the budget for the midday meal is inadequate to provide the nutrition prescribed in the scheme. Most people know that in many places the allotted food grains don’t reach the schools in entirety. But there is no move to raise the budgets or to ensure that every grain of ration supplied for midday meals reaches the children.

Everyone appreciates that the quality of our teacher education is poor but it has taken decades to even decide to upgrade the B.Ed. programme to two years from the existing 10 months.

The Centre’s proportion of the budget in many important programmes such as the Integrated Child Development Scheme, the midday meal scheme, the Sarv Shiksha Abhiyan (such as for in-service professional teacher development) and so on have been reduced from a 75:25 ratio to 60:40. I shudder to think how these expenses will be met, especially by those states that have very little income or very little desire to achieve quality education.

We do have a large number of committed people in the education system. It is the apathy of our political and bureaucratic system towards some of the most ‘critical to quality’ issues that is proving to be the nemesis of quality education in government schools. Whenever one tries to discuss the issues related to implementation of committed actions even under the current policy and programmes, there is an unwillingness to address them.

Education policies and curricular frameworks can keep being revised but if we don’t create basic enabling conditions on the ground to benefit the next generations, they will remain just on paper. We owe this to the more than 70 per cent of the population whose children are solely dependent on the performance of the government school system.