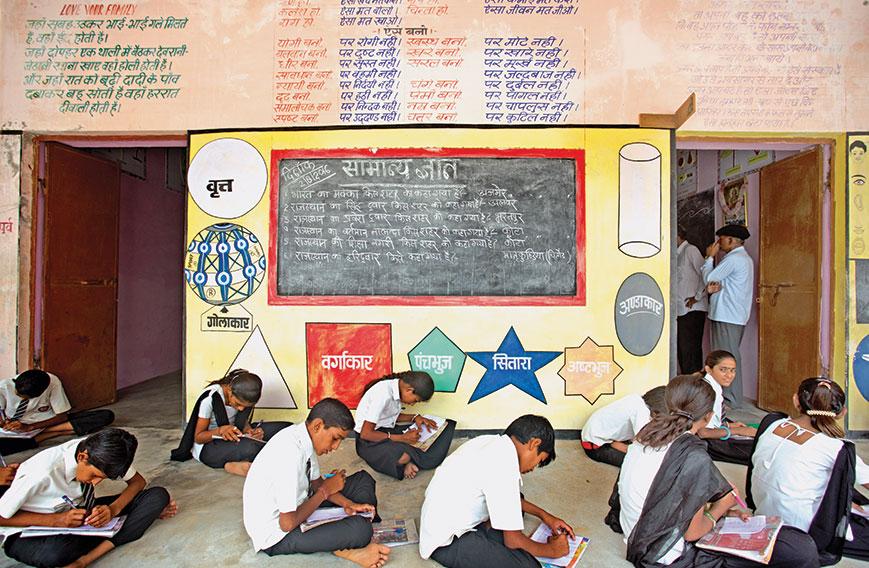 During the past three months, I have seen some short educational films prepared around existent examples of certain schools, teachers, head teachers and teaching practices. Almost all the films were made to showcase practices that a larger cross-section of people mostly connected with the education domain could learn from. The production quality of the films was quite good, the illustrations were relevant, the situations were real and some of our team members truly needed to be complimented for what they had done despite obstacles. With the kind of low awareness and low expectations that society in general has with regard to school education, some viewers were bound to get carried away by some of the films.

While the films were generally good to watch, they disappointed me for the very base level messages that they were conveying. Some of the pedagogical processes had the potential to even convey or re-enforce wrong examples/methods/principles.

One of the films captured a school event — well attended by parents, community members and some government dignitaries like the district collector. The film depicted children in Class 1 and Class 2 presenting a dance with a patriotic song playing in the background. The actions suggested a well-choreographed sequence with no “tolerance for error”. This was evident because there were some children who went out of step and were visibly terrorised (through body language) by their teachers. In the same film, there was another action sequence with the teacher singing a nursery rhyme (“Baa, Baa, Black Sheep” followed by “Twinkle, Twinkle, Little Star”). These were Class 1 students and some children were doing their own actions rather than syncing with the rest of the group. However, the teachers would not tolerate that ­— since that was not how they had taught the children. The children had no freedom to interpret the songs in their own manner — they could only follow what was told to them.

Several thoughts came to my mind. The overriding thought was: “How is this different from normal rote learning?” Another thought was: “Why couldn’t we find other songs in local languages, why resort to the usual ‘Twinkle, Twinkle’?” Third thought: “What is wrong if a child expresses ‘Twinkle, Twinkle, Little Star’ in his  or her own way rather than strictly conforming to what was taught?” Fourth: “Could the teachers have done something else that had the potential to make children think and do something more creative?”

The district collector in his longish speech praised the school and the teachers for disciplining the children well and ensuring that even the younger children in Classes 1 and 2 followed the instructions of the teachers. While he was well-meaning and supportive of good-quality education, his speech smacked of traditional thought on discipline, rote learning  and the like.

Another film celebrated a teacher who ensured 100 percent children being able to read and write. The teacher spoke eloquently about the importance of language, reading, understanding and so on as the basic foundation for learning. However, his teaching methods bordered on rote learning. He was reading loudly in the class and the children were repeating what he read. There was a lot of learning material visible in the classroom. The film could have dealt with how he used multiple learning material and methods to develop reading with understanding. There was practically no focus on understanding by the children.

Another teacher explained the concept of zero by saying “zero means nothing”. He demonstrated this by shifting a piece of chalk from one hand to another. He explained, “When the chalk was in the left hand, there was something there. The moment it was shifted to the right hand, ‘nothing’ was left in that hand.” This was a highly debatable example and the teacher also missed the opportunity to mention how zero, when placed at the right place, enhances the value of a denomination. One was left wondering how the children would interpret the concept of zero going forward in their lives.

There were several other examples in the films that either reinforced rote learning practices or conveyed acceptance of some of the infrastructure and other access inadequacies.

Will I stop the usage of these films? The answer is a resounding “No”! At best I will suggest a few modifications in them.

Why am I discussing all this?

While any improvement in teaching-learning methods is welcome, it should not celebrate and inadvertently propagate processes that are not consistent with the goals of our policy and curricular framework. I visit a lot of schools which try to showcase good practices. They enforce a lot of discipline which is threatening for the students. Schools are kept clean by deploying additional resources or forcing children to clean them. There is very little focus on explaining the importance of hygiene and clean habits.

I am confident that if students understand the importance of keeping their surroundings clean, they will not create dirt. And there is no rote way of learning cleanliness. While the end result is important, the method to achieve the end result is at the heart of the education process. That is the reason I found it rather unique when the principal of a school explained to me how every child in the school was taught basic sanitary and toilet habits that have kept their toilets clean without further effort. Using the toilet the right way and keeping it clean has become second nature for those children and they also take these habits home.

It is some simple habits like turning off the water tap completely, stopping leakages in time, understanding and discussing what every drop of wasted water means to the world, providing suitable dustbins on the premises and not throwing the mid-day meal leftovers all around inside the school that have a huge potential for developing the future personality of a child. And involving children in understanding the reasons for doing all this would go a long way.

All this may appear very non-educational but is so important in the education process. It is the approach that is critical.

The moment we stop merely “telling” our children what to do and begin explaining, allow them to be themselves and accept their different interpretations of what they learn, we will begin real education. It would also help us move away from expecting children to follow just the one way that we teach them.

Capturing better teaching-learning practices and spreading them is necessary. However, before we do that, we must examine whether they are conveying some wrong principles. More specifically, any possibility of people misunderstanding the message must be eliminated. In a nation where the deeper understanding of education is seriously missing, any tokenism leading to the promotion of existing mediocre educational practices must be studiously avoided.