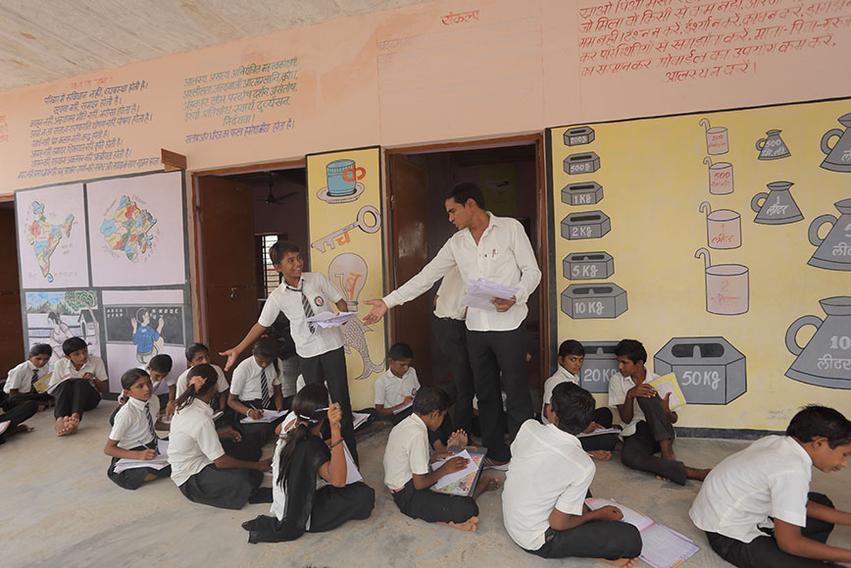 The head teacher greeted us with a broad smile — as if she knew us for years — though I was meeting her for the first time. It was a school with 90 students across five grades. The same old story of very inadequate infrastructure, but nicely decorated by the teachers and students. The head teacher’s room was an apology of an office and yet appeared very cheerful. It was merely an 80-square-foot room stuffed with a table, four chairs and a bench on which three teachers had somehow fitted themselves. The rest of the place was occupied by students’ records and other papers. What made the room most cheerful was that the children were happily dropping in with all kinds of silly issues without any fear and the head teacher was pleasantly responding to each one of them, many times, interrupting the conversation she was having with us.

Compare this with some of the private schools where the principal’s room is like a fortress for the children. I mentioned this fact to the head teacher and she proudly said, “In our school, the children are not scared of approaching us, asking questions and also providing responses if someone asks questions!” It reflected the culture they had encouraged in the school. Our main purpose in meeting them was to understand their experience with the Teacher Learning Centre of the Azim Premji Foundation and seek suggestions to improve our engagement.

The teachers told us that after their engagement with the Foundation, they decided to move away from memory-based learning as much as possible. Constraints and difficulties created by the administration would continue to exist and they had to find their own methods of running their school for the development of the children. We loved their spirit.

There have been several levels of difficulties that the state administration has currently created for them.

First, they have to ensure Aadhaar card registration for each child. While they think this has some utility in the long run to track the child, it creates a significant immediate overload on the school. Even today, many children don’t have Aadhaar cards despite persistent follow-up with the parents.

Second, once the Aadhaar card is done, the school has to ensure that each child opens a bank account, jointly with one parent so that various amounts such as reimbursements for textbooks, uniforms and the like are credited to these accounts. This is a huge amount of work — involving follow-up with parents — first to get the parent’s account opened, then the one for the child. Many parents don’t understand the need for the bank account. The banks, on their part, create several levels of difficulties in opening an account — rather than facilitating it.

The new academic year has already begun in this state but the accounts for all the children have not been opened. Therefore, amounts towards books and uniforms have not been deposited — and the children have not been enabled to buy the new textbooks or uniforms. Apart from the non-teaching work of opening bank accounts and so on, the important details are (a) there is a difference in the amount deposited for textbooks and the price at which the books are available (this problem did not arise earlier, since the school was providing the textbooks) (b) Just because the amounts are deposited in the children’s (joint) bank account is no guarantee that the books or uniforms will be bought. Parents can easily influence the child to withdraw the amount for different legitimate and illegitimate purposes — such as monthly groceries or alcohol (c) Earlier, the uniforms were directly provided by the schools. Within the same funds, the schools would negotiate with the supplier and get uniforms for all the children. Now, only some children get the uniforms — creating a divide and clearly identifying the children belonging to SC/ST categories.

Third, the State Education Department has decided to replace the existing state books with the NCERT textbooks. While the new textbooks may be good, the teachers have neither been consulted nor been prepared on how to use them more effectively. The minister has decided that the new books will improve the quality of education and also stop the movement of children from government schools to private ones.

The head teacher and the other teachers were not complaining. They were simply explaining the additional time investment in non-teaching work. And their biggest sorrow was that the state did not take them into confidence and enabled them to do this additional work.

This reminded me of my experience in another state in 2007, where the state had decided to implement Activity Based Learning (ABL) across all schools. During my visit to two of the schools in the district where we were working, I found a lot of unpacked material in a classroom. Since the material had reduced the space available for the children, I asked the teachers what it was. Some of them said they did not know, while others said it had something to do with ABL. They explained that the material had arrived six months earlier but they did not know what to do with it — since there was no information from the Education Department as to what it was all about. This was another example of the state making huge investments in centrally manufacturing teaching-learning material and sending it to schools without consulting, informing or preparing the teachers to use it for the intended objective. Just two years later, the minister changed, the Education Secretary changed and ABL made an exit from the state — as fast as it had entered.

The government and the Education Department are expected to do everything to empower and enable schools, principals and teachers through their consistent actions. However, the picture on the ground is almost the opposite.

There are several policy decisions administrations have made without consulting and preparing the teachers at national and state levels.

These include some important provisions of the Right to Education Act, 2009, such as coverage of children only upto Class 8, the provision for 25 percent reservation for students from the underprivileged classes, the provision for continuous comprehensive evaluation, the provision for no detention of children. They were all done without consulting or preparing teachers. I am not discussing the merits of each provision. The point I am making is that any good decision must be made after involving stakeholders and thoroughly preparing them to implement the decision in its spirit and letter.

One of the key aims of education, as enunciated by our National Education Policy 1986, is to promote education that develops constitutional values — such as democracy, socialism and secularism. Where are these principles being followed while implementing education policies across states and the nation? Why are teachers and school leaders not being taken into full confidence and, more important, being equipped to achieve the end objective of each policy? Assuming politicians and bureaucrats decide to introduce some policy for the “good of education”, why is it not done by creating sufficient enabling conditions in the schools? These questions must be answered before we spring surprises on the schools and the most important stakeholders — teachers and parents!