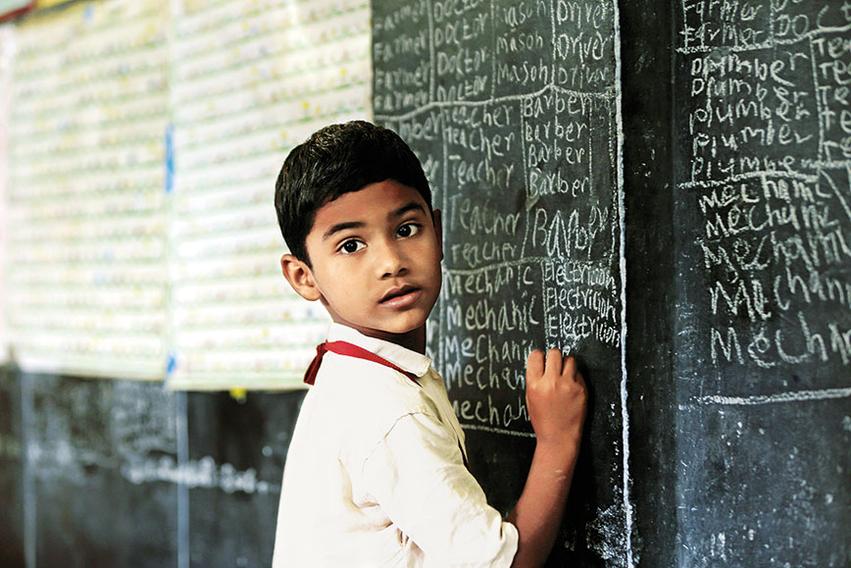 On my way to Hyderabad airport, around 35-40 kilometres from Gulbarga, I  spent time interacting with government school teachers at the Teacher Learning Centre of the Azim Premji Foundation run by a young post-graduate from Azim Premji University. The centre was barely three months old and was focussed on developing the English language abilities of teachers in surrounding government schools.

Around 25 teachers were present and I was pleasantly surprised to observe that all of them interacted with me only in English – by design. While their vocabulary was not very rich and they did make several mistakes in grammar and syntax, their confidence, fluency and determination to stick to English were pleasantly striking. And even more creditable was the fact that this change had happened in just three months. It gave us confidence in the belief that if we made a quality effort and persisted, we would be able to see change.

Till Class 11, I studied in the Marathi medium. English as a language of study was introduced to me only in Class 5. I was able to quickly master the mechanics of it and began scoring cent percent marks in English. I mastered the textbooks of the next standard during my summer vacation and was chosen by our English teacher as a role model for other students.

My father was greatly enamoured of the English language and would be in awe of anybody who could speak it fluently. One of his favourite activities was making me read The Times of India loudly while he shaved (a rather elaborate ceremony). I was then in Class 8. The only thing he would do was to correct me when my pronunciation was wrong. I had mastered the art of reading English loudly without understanding much of what I was reading. I continued to get very high marks in written examinations. Even in college, for the first two years when we had English as a subject, I used to score more than students educated in the English medium. However, my ability to speak English was never tested since the world around me spoke primarily in Marathi and, in some cases, Hindi.

I experienced my first Waterloo when I joined the Tata Institute of Social Sciences (TISS). My roommate was from Tamil Nadu and did not know a word of Hindi. The process of speaking with him in English made me nervous since I was constantly translating words from Marathi to English. As we became friends, he started laughing at my use of certain words – like calling postal stamps “tickets”, an electric bulb a “globe”, and so on. I did not take it seriously since I attributed this to lack of practice and the opportunity to speak in English.

However, my notion that my written English was great was shattered when my field work supervisor, Prof Kudchedkar (he was head of personnel management and industrial relations at TISS but was a professor of English earlier in his career), returned my field work journal with red markings all over. Practically every sentence had an error – either the preposition was wrong or the usage of verbs was erroneous. I noted each and every correction, realised my mistakes and by the end of the semester, was able to write reports with practically no errors. Over a period of time, I realised that I had to stop translating Marathi into English and think in English itself. In the long run, that solved the problem.

During the early years of the Azim Premji Foundation, around 19 years ago, we did a quick survey on the aspirations of parents regarding their children in districts close to Bengaluru. One of the three common desires was that their children should be able to speak English. The other two: knowing  computers and getting a job in the IT sector.

The past 20 years have seen almost a 20 percentage point migration of children from government schools to private ones. And among the complex reasons for such migration (including the perception of the poor quality of education in government schools, poor infrastructure, time spent on task,  accountability, status, and the like), the one most frequently cited by parents is that English is the medium of instruction in many private schools. At the same time, it is an open secret that in thousands of private schools, especially in semi-rural and rural areas, English is taught very poorly.

The Sub-Committee appointed by the Central Advisory Board of Education (CABE) to recommend actions to improve the quality of education in government schools (thereby enhancing enrolment and attendance in these schools) made several suggestions. Two involved introducing early childhood education in government schools and introducing English as a medium of instruction for those children who opted for it. The logic was that most “early childhood schools” (often referred to as nursery and kindergarten schools) are private and once the child begins attending a private school, the parents are reluctant to move him from a private kindergarten school to a government school. Further, most surveys indicate that the positioning of English by private schools is a big attraction for parents whose sole aspiration is that their children should not fall behind in the national and international race.

As the National Council of Educational Research and Training (NCERT) in its position paper on the English language states: “English, in India, is today a symbol of people’s aspirations for quality in education and fuller participation in national and international life.” While this may be the reality, the million-dollar issue is how do we develop the capacity of the education system to promote good quality teaching of the English language!

At one end of the spectrum is the enormous ability of children to pick up multiple languages in very little time and, on the other, is the huge apprehension of teachers regarding developing their ability in the English language. In between are critical issues such as lack of an environment to speak English – both for teachers and students, absence of good English books for children, lack of good programmes to train teachers in English proficiency, poor-quality textbooks, teachers treating textbooks as the only tool to teach English and not using computers imaginatively to promote the language.

Teaching English to children – especially early in life – is not such a difficult issue, provided teachers, teacher-educators, bureaucrats and their political masters are serious about it. For displaying this political will and seriousness, we need large-scale commitment coupled with the necessary financial and human resources. There needs to be a systemic effort to train teachers in English language pedagogy, create a suitable environment around teachers and children, and ensure complete elimination of political drama linked with political games that fight language wars on the ground to serve narrow interests.

China, for instance, mandated that all citizens would learn reading, writing and speaking English in 10 years and more or less achieved it. Japan, in the 1990s, showed a lot of resistance to the English language but with the advent of the internet, altered its stance completely and announced incentives for English language learning. We, as a nation, need to take up this issue on a war footing.