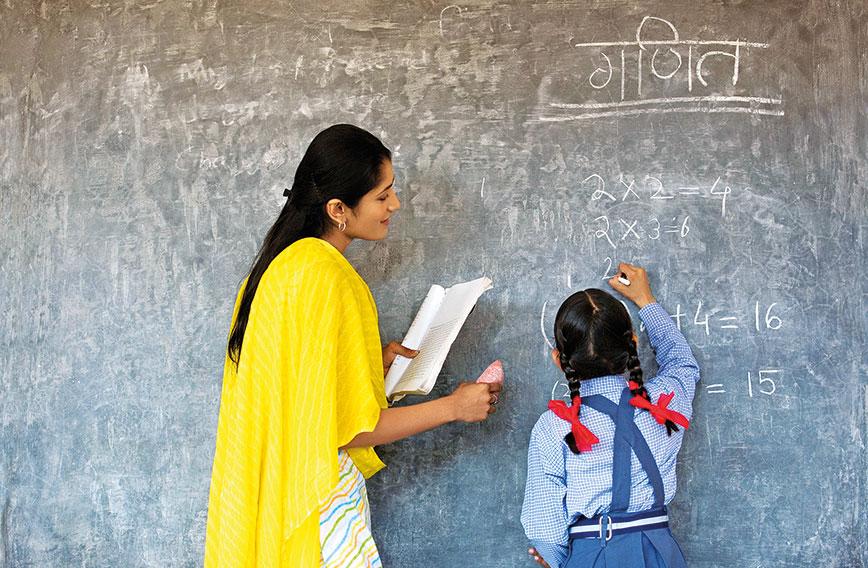 Throughout our journey from Rudraprayag to Agastyamuni, the  Mandakini river flowed to  our left, quietly and gracefully.  I felt a tinge of sadness since the Mandakini, after 20 kilometres, would cease to exist by merging itself with the Alaknanda river. After 70 kilometres, the Alaknanda too would join the river Bhagirathi at Devprayag to become the Ganga, the most revered river in India.

A few kilometres after Agastyamuni town, we began our steep climb to the school where the Azim Premji Foundation had organised a Bal-Shodh-Mela. The primary objective of such a mela is to work with the teachers to organise children’s activities around identified themes. During this process, the teachers get an opportunity to go into the depth of subjects, think of local material to teach the themes and promote a culture of enquiry.

Four nearby schools had also joined the mela with their children and teachers. The local teachers mentioned that the altitude of the school was approximately 7000 feet. While climbing up, I noticed the Mandakini fading into a brown line due to the height that we had reached.

At the school, the children were enthusiastically waiting for us to arrive. In fact, they had come to the school as early as 7 am. The mela was about science, nutrition, body and the digestive system. By the time we finished interacting with the children and seeing the stalls that the teachers and children had jointly organised, it was past lunch time and the teachers insisted that we at least have tea with them and chat for a while.

We happily settled down inside a tiny room, supposed to be the head teacher’s office. There were eleven of us in that cramped room. The head teacher was very happy with the Bal-Shodh-Mela and the questions we posed to the children. She realised that it is important for the children to think through and understand the basis of everything that they did.

The habit of asking the reason behind everything would help children grow up with a rational mind set and no politician would then be able to make baseless statements while asking for their votes. The lively conversation that ensued, covered several topics — the fundamental issues of quality education, how the concept and principles of the Bal-Shodh-Mela could reach the classroom, how locally available material could be used to explain concepts in the classroom etc. We also talked about where the teachers lived, how they travelled to the school and how they dealt with the extreme seasons in the hills. The  conversation loosened the initial formal atmosphere leading to some jokes about how one particular teacher’s husband did not know cooking and how he would be fasting that day since the teacher would reach home only by 4.30 pm!

The teachers commented on the informal relationship they noticed among members of the Azim Premji Foundation. They asked me what my job was and, before I could respond, one of my colleagues mentioned that I was the CEO of the foundation. They expressed surprise over the non-threatening atmosphere that prevailed amongst us. They immensely liked the discussions with us that focussed primarily on the quality of education and the challenges facing the teachers.

The head teacher contrasted our interaction with the visit of government education functionaries. She described how hierarchical such visits were, how the officers just go through the records and don’t leave a single opportunity to fire them in front of everyone. Normally, they don’t even discuss the real educational issues, she said. The head teacher also mentioned that the officers always occupy her chair whereas I insisted on sitting on the bench in the room. In response to the threatening behaviour of the education functionaries, the teachers focussed on how to look good rather than how to become good. Managing perceptions became everything
for them.

The head teacher genuinely asked, “Why can’t the officers not have a friendly and informal relationship with us the way you have in the Azim Premji Foundation? Why can’t they be nice to us? Why can’t they discuss academic and educational issues with us instead of merely going through our reports and documents?”

This is not the first time I was hearing such comments. I have personally observed and experienced many incidents where senior officers cruelly insulted their juniors — especially the academic fraternity.

While serving on a prestigious academic council of a government body (along with a few other NGO members), the senior bureaucrat chairing the meeting chose to harshly reprimand the members of the institution in our presence for seemingly trivial issues. The chairperson went to the extent of saying that many members of that organisation would lose their jobs if they did not mend their ways. We had to request the chairperson not to humiliate their own employees in our presence.

I think senior officers need to realise that teachers influence and deliver education to children and it is supremely important to respect them, enrich them, value them and motivate them. Unfortunately, we live in a highly feudal and hierarchical system that is not only disabling but strangulating the education system and more importantly the all-important institution called “school”.

And this happens across government and private organisations. I remember in 2005, during an MoU signing event of our “Learning Guarantee Programme” in a particular state, the cluster and block functionaries who were invited began complaining about how the teachers treat the children in a threatening and insensitive manner.

In my speech, I appreciated their sensitivity towards the children but also pointed out that they themselves treated the teachers and head teachers in an equally threatening manner when they visited the schools. I also drew their attention to the feudal nature of society. I illustrated this by pointing out that even in the room where we were sitting, the tea to the Chief Secretary and the Principal Secretary was served in different cups and only the Chief Secretary’s chair had a higher back. I narrated a Wipro story: customers visiting Wipro many times complained they didn’t know who the chairman was since he did not sit at the head of the table but somewhere in the middle with other team members.

In my earlier column I had discussed how several important decisions in education were made by the bureaucracy without involving, consulting and preparing teachers. If we want to empower teachers to play their role in achieving the goals of quality education, we need to free them from the stranglehold of the bureaucracy and make them equal partners in the nationally important mission of quality education. It has been repeatedly established that all great organisations with an exciting vision create an enabling environment for their members that is non-threatening and exciting and clearly aligns their members to their  vision.