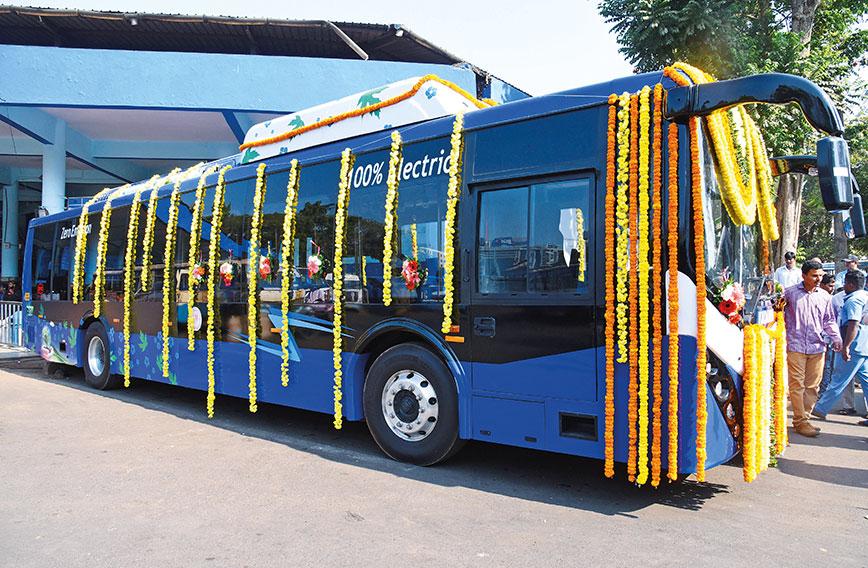 An electric bus has been launched on an experimental basis

With the exception of Vasco, which bears the brunt of coal dust pollution, the remaining cities in Goa have pollution levels that are below prescribed levels. But this has not stopped the Kadamba Transport Corporation (KTC), a public sector undertaking, from embarking on a journey to convert or replace its diesel engine buses with electric, biogas or ethanol ones.

The experiment started on 15 August last year when Sweden-based Scania was granted permission to operate biogas and ethanol buses on a trial basis. The reasoning was that since the Saligao garbage plant generates bio-gas from treatment of nearly 100 tonnes of garbage per day, it could be used as fuel for buses. The Saligao plant at present feeds the gas to two electric generators. 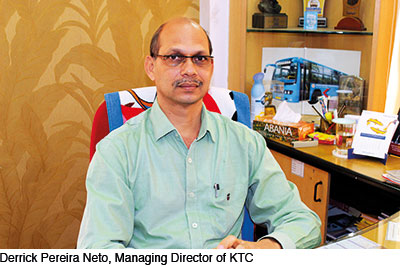 The trial, which ended on 15 February this year, was conducted at no cost to the KTC. “Scania provided the bus with a driver and support staff and we provided infrastructure as well as assigned routes for the test,” said Derrick Pereira Neto, Managing Director of KTC. Revenue earned was collected by Scania which also had to procure the ethanol. In the case of the biogas bus, the arrangement was the same, with Scania procuring the fuel from Kolhapur.

While the KTC awaits the cost-benefit study of plying these two buses, another experiment is underway. On 15 February, Goldstone Infratech of Hyderabad which has a collaboration with BYD Auto Industry Company in China, began trial runs of an electric bus. The only difference between the two arrangements is that in the case of the electric bus, the revenue earned on trips goes to the KTC.

The trial run of the electric bus will end in July after which the KTC and the government will select the most suitable system, based on the feasibility studies done on all three buses.

Explaining the rationale for going electric, Neto said, “Goa is being over-exploited. Air pollution in itself is not a problem. But there is need to be vigilant about the environment. Clean transport is therefore an important statement. KTC was selected by the state government to go green.”

But this is easier said than done. While going green is an ideal, the switchover will come at a considerable cost to KTC and the government.

Explaining the economics of going green, Neto said, “KTC cannot afford to buy green buses as they are five to six times more expensive than diesel vehicles. The only way around this problem is to hire buses and pay per km travelled.” But even here the maths does not favour KTC.

Due to social services provided by the KTC, such as monthly passes, concessions to students and senior citizens, running of buses on non-profitable routes and providing its staff of 2,029 with Pay Commission salaries and benefits, KTC is always in the red and relies on handouts from the government.

Neto said that Himachal Pradesh has hired 20 electric buses at a cost of Rs 87 per km. At this rate the operating expenditure of KTC, which has 546 large and mini buses, will nearly double and so will its losses.

“Second, for electric buses to be cost-effective, they have to have a daily run of at least 300 km, which is not possible in a small state like Goa where KTC buses travel a maximum of 200 km a day,” explained Neto. The only way out is to bargain hard and bring down the rate per km to an acceptable level.

Even as KTC grapples with the pros and cons of going green, the Department of Transport (DoT) is laying the foundation for a green transport service. The biggest hurdle, though, is that in Goa the public bus transport system is divided between the private and public sector with the former holding a larger share with around 1,500 buses. 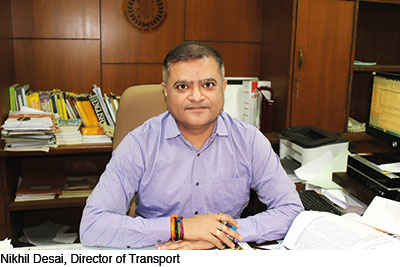 Director of Transport Nikhil Desai is aware of the input costs of going green. “The drive will have to come from the government,” he said, “there is a huge capital investment in electric buses and the private sector might not be able to afford it.”

Despite this, the transport department is doing the groundwork for switching to electric vehicles. In January this year a notification exempting fully electric vehicles from payment of road tax, which is 12 percent of the invoice value, was issued.

The Goa Tourism Development Corporation (GTDC) has already floated a tender to set up around 500 electric bikes with charging stations. “The company which bags the tender will have to create the charging stations and we will provide space at GTDC hotels,” said Desai. “The bikes will be able to travel a distance of 30 km per charge and will be used to explore city bylanes or for birdwatching trips.”

The department is approaching its task with a modicum of caution. It plans to first get small operators like two-wheeler taxis and rickshaws to switch over and hopes to create a cascading effect on other modes.

Desai is aware that the biggest challenge is to create charging infrastructure. “This will have to be a multi-departmental effort involving the transport, PWD and tourism departments.”

The transport director has already begun talks with Anurag Singh, senior manager, business development, National Thermal Power Corporation (NTPC), which has shown interest in setting up charging infrastructure at its own cost.

“If Goa comes up with a plan to set up infrastructure for charging vehicles, we will provide all the support and guidance,” said Singh.

NTPC is already in the process of working out a charging station plan for the cities of Jabalpur and Dehradun. “Plans for these two cities are yet to be finalised and we are in the process of evaluating the number of vehicles and chalking out the routes.”

The offer by NTPC will save Goa huge infrastructure investments as the company is willing to bear the entire cost which it plans to recover through revenue for charging vehicles.

Desai is unfazed about the expense. “The high cost is because electric vehicle manufacture is a sunrise sector. You might recall that LED bulbs were prohibitively expensive when they first came into the market. Costs dropped drastically as consumption increased. The same economic principle will apply to e-vehicles,” he says.