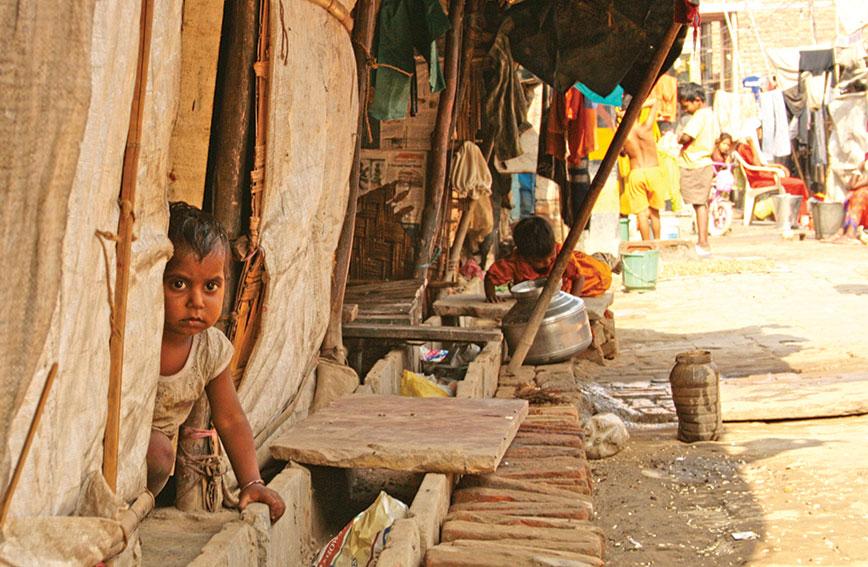 Individual toilets, sewage connections, drainage and water connections are the priorities of people in slums

Are basic property rights for slums the answer?

Every Indian city has its share of slums. City governments have tried, over the years, various strategies and policies to deal with them and failed. Eviction is inhuman, low-cost housing finds few takers and fitting infrastructure into a jumble of half-built homes is messy. Redevelopment works if the slum is in a prime area and can attract builders.  As a result, almost 33 to 47 percent of the urban population continues to live in slums.

A report by FSG, an international consultancy, recommends the way out as giving residents of informal housing basic property rights. The report is titled titled, Informal Housing, Inadequate Property Rights: Understanding the needs of India’s Informal Housing Dwellers. The authors of the report, Vikram Jain, Subhash Chennuri and Ashish Karamchandani of FSG, spoke to experts and carried out surveys of informal housing settlements in Delhi, Hyderabad, Cuttack and Pune.

The report recommends a more fluid interpretation of property rights. Conventionally, property rights mean the right to use, develop and transfer property. The researchers advise a different set of property rights for informal housing — one that allows the owner-occupant to develop the land, inherit property and get basic services as well as formal mortgage from banks or financial institutions.

The government could also permit the owner-occupant to have only the right to use the property and access basic services as in public housing. Alternatively, it could give property rights on lease. It could also restrict use and exchange of such property to only between low-income groups.

The report groups informal housing into three segments. First, insecure housing (unidentified slums), where people have no property rights and are most vulnerable to eviction. Secondly,  transitional housing (identified slums and recognised slums), which exist in government records and are gaining de facto rights or the right to use. Third, secure housing (notified slums and unauthorised housing) where people do have some property rights and can’t be evicted summarily.

The report looks at each category separately and analyses what can be done. It is possible to have slum free cities: as the report points out informal housing hasn’t been expanding in cities.

“During the slum mapping and survey, while we actively looked for new slums that were less than five years old, we found very few,” say the researchers. Urban development experts and NGOs backed  their observation. There wasn’t any land in the city to encroach on as owners were protecting it. “As an example, only one percent of slums in Hyderabad were less than five years old as of 2013,” say the researchers.

What the FSG report is proposing is more in line with what city governments are known to be comfortable with  — giving slums access to services and basic property rights rather than freehold rights. The impact would be to increase the stock of affordable housing.

In fact, slum residents are keen to invest in home improvement. Nearly 82 per cent, including those who faced a high risk of eviction, told the researchers that they wanted to spend on improving their living conditions. In Delhi, where fear of eviction is the highest, 75 percent of residents wanted to build brick walls and individual toilets. Most slums weren’t shanties but consisted of pucca and semi pucca housing, say the researchers.

Slum residents do have the money to invest. They are a ‘vibrant lot’ says the report. “More than 75 percent of families in this segment (except insecure housing families) own a TV and a mobile phone. An estimated 75 percent of informal housing families live in pucca homes.  Their median self-reported household incomes are probably higher than the World Bank’s poverty line,” says the report.

So, personal savings and informal loans are used to improve homes. Nearly 30 percent of microfinance loans are taken for housing. People construct incrementally since the loans they can get are small. They spend on building brick and cement walls and a toilet. What they ask for are sewage connections, individual water connections and drainage. They also want roads and garbage collection. Medical facilities and transport are ranked lower than these immediate needs. Without formal property rights they cannot demand services from the government except under welfare schemes.

But the quality and quantity of these services is poor. Nearly everyone has access to electricity but not to individual metered connections. Most residents have to use community toilets, except in Hyderabad. Yet 87 percent want a private toilet. People also spend hours trying to collect water
from community taps. Water supply is irregular and inadequate.

Since it is difficult to get trunk infrastructure into transitional housing settlements, the report recommends decentralised sewage systems, such as small-bore sewerage systems that can either discharge into the municipal trunk sewerage network or to a treatment plant set up near the settlement.

Clean drinking water can be provided through decentralised water filtration plants set up by companies and NGOs like APMAS, Eureka Forbes, Sarvajal, WaterHealth India and Waterlife.

There should be a tap in every home. Since water supply is erratic, a storage tank could be built along with a water pipe network that would provide water to each home.