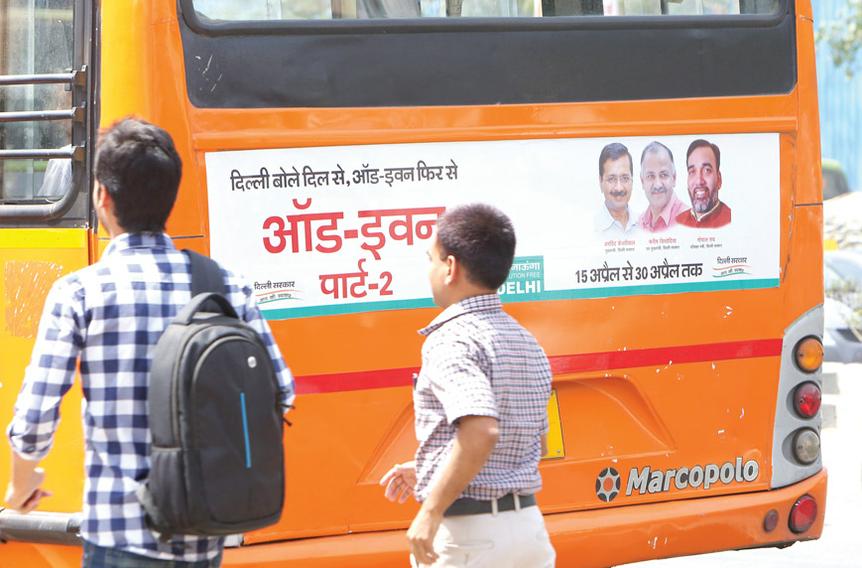 Is AAP govt's choice of odd-even a farce?

In April, residents of the National Capital Region (NCR) usually brace themselves for the onset of summer and dust storms that accompany the change of season. This year they also readied for a second round of odd-even — a regulation for rationing road space by which cars with odd and even numbers would be allowed out on alternate days in New Delhi from 15 April to 30 April.

The first time this was done was in January with the aim of curbing runaway winter air pollution. It was enforced again in April with fanfare and an expensive advertising blitz which splashed pictures of Chief Minister Arvind Kejriwal, his deputy, Manish Sisodia, and transport minister Gopal Rai all over New Delhi.

However, for all the high-decibel activity, no one was quite certain what results would accrue from another round of odd-even. Studies show that the first round in January had at best a negligible impact on air pollution. Except in patches, it didn't do much to speed up traffic and unclog roads either.

The AAP government, however, claimed it had done a survey in which residents had supported odd-even and wanted it back. The second round was by popular demand, the government claimed, though not much about the survey is public.

Transportation and urban experts say the use of odd and even number plates to ration road space does little to promote sustainable urban travel in a city. It can at best be a short-term, emergency measure. In New Delhi a long-term solution is needed. The challenge is to get more people to use public transport. To achieve this serious efforts are needed in design and infrastructure together with disincentives for the use of personal transport. A lot of learning has taken place across the globe. There are experts who could be consulted.

With so much already known, it seemed odd that the AAP government chose a second round of odd-even to sort out New Delhi's problems of congestion and bad air. One view in political circles was that odd-even had more to do with Punjab than New Delhi. With an eye on the impending Punjab Assembly elections, Kejriwal wanted to be seen as a Chief Minister who could take decisions and see them through. AAP hopes to be the alternative voters in Punjab will choose over the Congress and the Akali Dal.

"It is very strange that with so much data and competence available, the government chooses to be intuition-based in its decision-making," says Geetam Tiwari, Director of TRIPP at the Indian Institute of Technology (IIT) in New Delhi.

Tiwari's team at TRIPP, which stands for Transportation Research and Injury Prevention Programme, studied the first odd-even in January and didn't find any significant gains to report.

As far as air pollution in New Delhi goes, automobiles account for 20 per cent of it. The rest comes from dust, a thermal plant, generators, farm fires in neighbouring states and so on. Taking cars off the road can't, therefore, make a huge difference. Moreover, exceptions to the odd-even rule allow two-wheelers, three-wheelers and cars driven by women to run. In the absence of robust monitoring by the transport department it is not uncommon to see vehicles emitting clouds of noxious smoke at street-level.

This time, Kejriwal said, the odd-even rule was meant to reduce not only pollution but also congestion. The first few days of its implementation didn't seem to indicate much success. There was bumper-to-bumper traffic  during rush hours just like there always is.

New Delhi clearly needs a better public transport system with integrated mobility that gets people out of their personal vehicles. It is a promise that AAP made at election time specifically saying it would put more buses on the road. But a year-and-a-half later there seems to be little real progress on the buses front.

There has been talk of adding 1,000 buses, but no serious work seems to have been done to make this possible. Adding a large number of buses without careful planning may in itself be a trigger for further chaos because it would lead to a situation in which road space would be further reduced. The new buses would, after all, be competing with the existing vehicles.

At present there are 3,500 buses run by the Delhi Transport Corporation (DTC). Another 1,600 Orange buses are run under a cluster model through corporatised ownership. Additionally there are contract buses, which are privately booked by office-goers and schools.

For additional buses to come on the road, parking space at depots has to first be provided. Second, routes have to be designed so that the running of the buses results in the reduction of personal transport. Third, traffic flows have to modulated so that there isn't a bunching of buses, as happens now. Fourth, different modes such as the Metro, buses and feeder buses, and three-wheelers are integrated so that commuters can make connections with ease. Pavements and cycle lanes are needed so that people can get to stops and cross roads in safety.

All this requires work by planners and designers who have the sophistication to assess New Delhi's requirements and put workable systems in place. At present such expertise does not exist in the government's transportation department. The Delhi Development Authority (DDA) has been providing broad masterplans, but it hasn't addressed the challenges of integrated mobility. DTC is wholly into fire-fighting to get its buses on  the road each day as it deals with 10 to 15 per cent breakdowns in its fleet.  DIMTS (Delhi Integrated Multi-Modal Transit System) has expertise, but then it is primarily a regulator for the corporatised fleet of Orange buses, ensuring that they adhere to certain standards of maintenance, cleanliness, regularity and safety.

In the absence of a well-researched strategy, the AAP government has been given to knee-jerk reactions. Lack of success with the first bus rapid transit (BRT) system started by the Sheila Dikshit government prompted AAP to abolish BRTs. It decided to put all buses into a lane on the left of the road, instead of in the centre of the road as envisaged by the BRT.

But while making these changes, the AAP government hasn't provided for slow-moving traffic, non-motorised traffic, pedestrians, vehicles turning left and so on.

"Many of the solutions that date back to the 1980s and haven't been found to be workable are being revived," laments Tiwari. She was part of the team that designed the discredited BRT and believes that such complex projects deserve better support in their implementation and that there should be learning from failures.

Effective urban design is about getting into detail, changing perceptions and making people more comfortable as they go about their daily lives. The sense now is that bus travel is challenging and even dangerous. Connections aren't good enough and high-floor buses are tough to access. Road design has to change so that commuters, especially women, feel at ease at street level.

Air-conditioned, low-floor and semi-low-floor buses are needed to improve the status of public transport. But who will manufacture them unless large orders running into thousands with planned replacements are assured.

The AAP government needs to come to terms with this array of complex issues. Instead, it is planning to give out licences to individuals to run buses in the way the Blue Lines and Red Lines were run some years ago. The buses will be of the high-floor variety. Individual licences will allow the government to duck its responsibility to provide depot space and ensure standards. It would have been much better to build on the experience of the orange buses run as clusters with accountable, corporatised management.

So, as New Delhi continues to be weighed down by pollution and congestion, the question in  most people's minds is how odd is the AAP government's choice of odd-even.