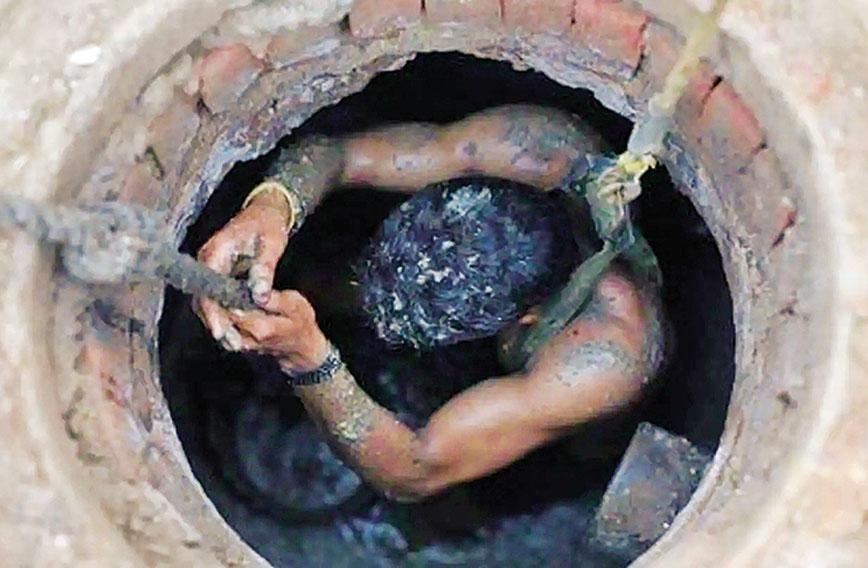 Dalits continue to be sent into manholes

Sewer deaths: why machines are not replacing people

IF a sewer line gets clogged in Japan, Sweden or France, and you really do need to send a man inside to unclog it, a sewer diver is called to do the job. The sewer diver has the status of being a highly skilled and trained professional. He dives in, clad in protective personal equipment with emergency measures on stand-by, and clears the blocked sewer.

But in India it is Dalits, the poorest and most marginalized community, who are sent into manholes with no protective equipment, to unclog filthy, stinky sewers or clean up septic tanks. Invariably, they die after breathing in noxious fumes. Newspapers report such deaths with frightening regularity. In almost every Indian city or town, the sewerage network is a deathtrap.

Such manual scavenging work was banned in 2013. Sanitation workers were supposed to be rehabilitated. Everyone is aware of the practice. Activists have protested. Award-winning films, like Chaitanya Tamhane’s Court, refer to the stark reality of the sanitation worker’s plight. Machines have been invented to do this nasty job. And yet manual scavenging continues.

It’s not as if no efforts have been made. Odisha, for instance, has emerged as the frontrunner in curbing manual scavenging. In September 2020, the state government launched GARIMA, a scheme for core sanitation workers and their families with all 114 Urban Local Bodies (ULBs). It also set up a State Commission for Core Sanitation Workers.

Aspects of GARIMA have been included by the Centre in its own NAMASTE scheme for sanitation workers. It offers loans and skilling opportunities and encourages cities to ‘convert manholes into machine holes’. Yet city governments continue to send sanitation workers down hazardous sewer lines to their death.

“The system of city governance is complex and convoluted at all levels. There has been some progress, but the pace of change is slow,” says Manvita Baradi, director of the Urban Management Centre (UMC) based in Ahmedabad, with some exasperation. “Unless we strengthen our municipalities, our city governance systems, we won’t make any progress.”

The UMC is a Section 8 company which works with ULBs to provide solutions to urban management. Its mandate is to simplify processes so that citizens get better services. Since 2017, UMC has been working with the Ministry of Housing and Urban Affairs (MoHUA) and the Ministry of Social Justice and Empowerment to converge livelihoods with the Swachh Bharat Mission.

“There has been much emphasis on sanitation improvement but not on worker safety and the occupational hazards they face,” says Meghna Malhotra, deputy director of UMC. “We focus on sanitation workers’ safety and how SHGs can be engaged across the sanitation value chain in cities across India.”

The UMC is also a member of the National Faecal Sludge and Septage Management (NFSSM) Alliance, a group of 30 organizations supported by the Gates Foundation. The NFSSM recommends policy and action on handling human waste safely and sustainably. Its agenda is four-fold: inclusion, technology, strengthening ULBs and communication, says Rishma Shah of the alliance.

Machines are available so how come they aren’t deployed to clean sewer pipelines?  The problem is that Indian cities and towns expand in a chaotic manner. Such growth does not conform to master plans often set in stone. Residential and commercial buildings, built by private developers, arise faster than roads, drains and sewer lines that are built by slow-moving government agencies.

As a result, the gradient on the ground is not even and sewage lines can’t be laid in a uniform manner. “It’s a planning failure,” says Baradi. “If you know how many people will occupy those offices and homes before such development happens, you can plan your sewerage system accordingly. But first the buildings come up and then you lay the sewage lines. Since the gradient is not even you will need much more water to flush sewage through those pipelines.” And every Indian city suffers from water shortage.

Then there are peri-urban areas or small towns where the sewerage system is absent and people opt for septic tanks. The problem, explains Baradi, is that the septic tanks are badly designed and built. Since people don’t want to clean out the tank every two years they dig, basically, a very deep hole. Over a period of time the sewage hardens in this hole and becomes rock-like. The depth of the tank and the hard sewage make it impossible for any machine to clean it up. You have to send a man down.

Also, who is in charge of sewer lines? In every city the agency responsible differs. It could be the Jal Board in one city, the municipality in the next. “There is no preventative maintenance. Indore is one exception. You should not let the sewer line clog in the first place. That requires a management system or an SOP. No city does any preventive maintenance apart from pre-monsoon cleaning,” says Malhotra.

Contracts for maintenance of sewer lines, given out via tenders, merely state that the pipelines have to be cleaned. “These are not performance-linked contracts,” says Malhotra. The contracts don’t spell out exactly how sewers will be cleaned. Will it be done mechanically? Which machines will be used?

So UMC surveyed the market for such machines, drew up an inventory and printed a catalogue which they distributed to various municipalities. Here, too, they hit a wall because the procurement process is convoluted and opaque.

“When cities buy one or two machines, it is mostly a photo-op. No study has been done to see how many and where they will be used,” says Malhotra.

The role of technology is also limited because of the maze of twisted lanes and bylanes in Indian cities. “Jetting machines and suction machines can navigate wide roads but not narrow ones. For that municipalities will have to work with the private sector to customize machines that suit the needs of their sewerage systems. Ahmedabad, for instance, has innovated such machines, trying them out before placing an order. But such things are not happening on scale,” says Baradi. 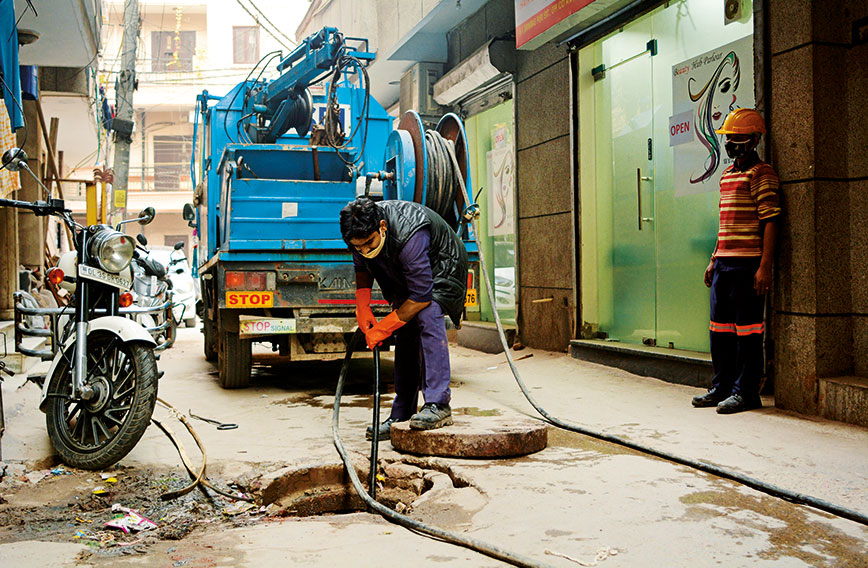 Some lanes are too narrow for machines

On November 19, 2021, World Toilet Day, MoHUA launched a Safai Mitra Suraksha Challenge for a week to encourage cities to mechanize cleaning of sewers and septic tanks. Around 246 cities took part. Baradi again underlines that it is all happening slowly. Cities like Chandigarh, Indore, Puri, Kanpur have taken up mechanization seriously.

“You know, there is also the mindset. Sanitation workers are Dalits. They don’t matter. This is so ingrained into the psyche of officials, to remove it is very difficult,”she says.

Odisha remains the only state to seriously try and improve the lives of sanitation workers and their families. UMC has been working with the state to implement its GARIMA scheme. It has managed to place sanitation workers in the highly skilled category and raise the minimum wage paid to them from `258 to `420 per day. An additional 15 percent risk allowance is paid by the housing department. Their work hours have been reduced to six hours per day. UMC also took up the task of training sanitation workers, evaluating them and giving them a certificate. It was tough because most of them are not literate.

“Sanitation workers in most states are not recognized. Even the terminology they use is scavenger. In Odisha we have been able to grade them as sanitation workers,” says Baradi.

Under GARIMA, sanitation workers are categorized into five job roles: sewer line cleaning, de-sludging, drain cleaning, community toilets and those who work at STPs and faecal sludge treatment plants. “If you are a sewer line worker or a de-sludger you are recognized as a highly skilled person,” says Baradi.

Protective equipment is provided according to each category. Clothing is also changed, as and when required. Gloves, for instance, may need to be changed every two months but perhaps not the helmet.

Before recommending such equipment, UMC did a survey. They talked to sanitation workers who told them that they did not wear protective clothing because of the heat or because the clothing was much too large for their small frames. The UMC assessed their problems, and gave them various gloves, aprons and wader suits to try out.

“It turned out to be a huge exercise spanning some six months. We ordered appropriate sizes, testing the equipment in summer and winter. We created a catalogue and got cities to procure some of this equipment,” says Baradi. Workers also had to be taught how to wear such clothing and how to remove it, wash it, hang it. Films and videos were made to propagate the use and care of such equipment.

The Odisha government also financed Garima Grihas, places where workers can change, bathe, eat and then go home. Earlier, they would go straight home with the dirt still on them and the risk of infecting their children was high.

MoHUA has issued an advisory recommending that every city set up a sanitation response unit attached to a senior officer like the commissioner to assess whether a worker is really needed to go into the sewer or septic tank and to ensure  workers are sent in with protective equipment, oxygen, and an ambulance is on stand-by. But, says Malhotra, this is not being implemented in cities.

Secondly, sanitation workers are offered alternative livelihoods. Malhotra says their interaction with workers in Odisha revealed that nearly 50 percent of them joined such work because they belonged to a sanitation worker family or had married into one, despite some of them being educated. “We have to break this inter-generation cycle,” says Malhotra.

“We are trying to capture their aspirations and link them to skilling programs and enterprise development programs. Once a worker starts an enterprise there is no help to run a business. So we are linking them to the National Urban Livelihoods Mission (NULM). Typically, ministries work in silos. This time all three, MoHUA, the Ministry of Social Justice and Empowerment and NULM, are coming together," says  Malhotra.

The NAMASTE scheme is applicable to 500 Amrut cities, typically large cities where a lot of work on laying sewer lines is happening.

Only 68 percent of India is sewered and most sewer lines disgorge into ponds, lakes and rivers. Both Baradi and Malhotra point out that long sewer lines linked to STPs are not sustainable. Smaller STPs at colony or housing level would be better suited to cities. Even better are Frequent Sludge Treatment Plants (FSTPs) which towns and cities in Odisha are opting for. Some of these systems are being managed by SHGs and groups of transgenders in the state.

“The problem is not in technicalities. We have great designers, architects, engineers and planners. But we have terrible managers. We don’t manage our cities well. It’s not going to happen with a few IAS officers or state-level officials who get frequently transferred,” says Baradi.