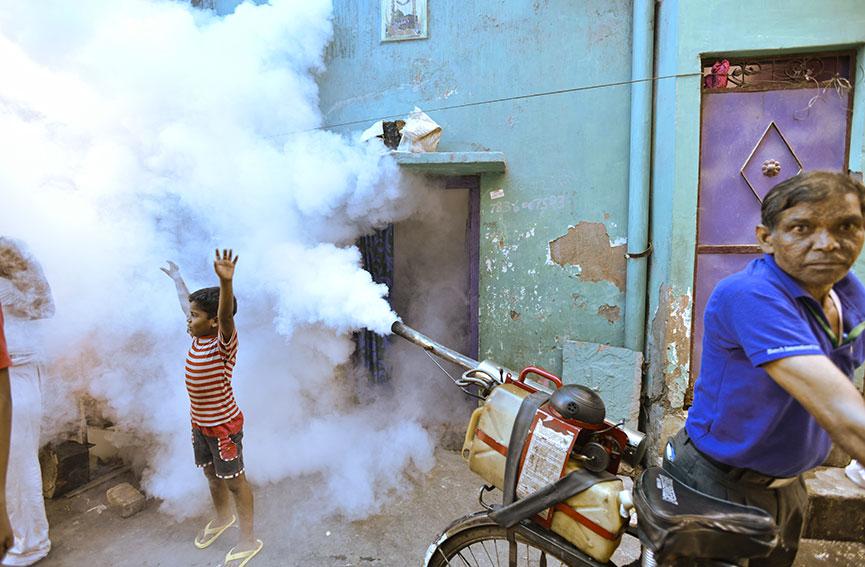 As dengue and chikungunya cases flooded hospitals in New Delhi, a fogging blitz was unleashed on the capital city’s slums and poor neighbourhoods in a belated attempt to contain the Aedes aegypti mosquito.

But was fogging really the answer or was it just a display of government action after an epidemic of vector-borne diseases had overtaken the city? What did the fog contain and should it have been unleashed from close quarters on residents without an advisory?

The fog contained chemical pesticides and diesel — both carcinogenic in the long term and hardly the things people should have been breathing in. Fogging also causes breathing problems and triggers asthma attacks. It irritates the eyes.

Public health specialists have called indiscriminate fogging a health hazard. At best it can be an emergency measure targetted at specific locations where mosquitoes need to be contained. The impact on mosquitoes is transitory, knocking them out for a bit, but not killing them. Much more damage is done to human beings inhaling the noxious fumes.

But Delhi’s residents seemed to be trapped in a political crossfire with the AAP-run state government out to discredit BJP-run municipalities. The annual drive to stop mosquito breeding didn’t seem to have been done. There has also been a mounting garbage problem.

New Delhi already has the dubious distinction of being among the world’s most polluted cities. It is common to use firewood for cooking in slums. Virtually nothing has been done to improve living conditions in slums though much has been promised at election time. Fogging in such conditions is doubly harmful to health.

“It is much more important to deal with the larvae of mosquitoes and prevent them from breeding than to try and smoke out adult mosquitoes,” said Dr Ravikant Singh, President of Doctors for You. “The best way to prevent vector- borne diseases is through prevention by draining out stagnant water, removing garbage and so on.”

The World Health Organisation (WHO) has also emphasised the ineffectiveness of fogging citing the example of Southeast Asian countries, where it hasn’t had an impact on diseases.

At least two doctors of the All-India Institute of Medical Sciences went on record in newspapers to say that there was a need to be cautious on the use of fogging.

“Fogging is harmful and should not be done indiscriminately. It is an emergency measure when all other measures have failed,” said Dr S.K. Sharma, head of medicine at AIIMS.

“The smoke is harmful to people suffering from respiratory health issues. It can cause breathing difficulty even among healthy individuals,” said Dr Sanjeev Sinha, another AIIMS professor.

At the Centre for Science and Environment (CSE), Chandra Bhushan, Deputy Director-General, said: “The direct inhalation of diesel fumes, combined with insecticides, can exacerbate asthma or bronchitis among those with respiratory ailments while pregnant women, small children and old people are most susceptible to aggravation.

“We looked into the issue when community members approached us and shared their observations and experiences. We found that fogging is ineffective in containing dengue and has a harmful effect on the health of people.”

An alternative to chemical pesticides like malathion is to use pyrethrin, which is naturally found in chrysanthemums and believed to be effective as an insecticide and less harmful to humans and the environment.

But there seemed little attempt to look at alternatives. In fact, as Delhi plunged into fogging it set a trend for neighbouring cities like Gurugram, where ill-informed citizens began demanding fogging as well — unaware of the implications for their health or the poor effectiveness of fogging.

As the weather changed in October, cases of chikungunya and dengue began reducing. The aedes mosquito doesn’t like cold weather. But next year, what will it be? Fogging or prevention?