Chandigarh wants to be a cycling city, but cyclists are missing

The honour of being the cycling capital of India could go to Chandigarh. It already has 180 km of cycling tracks along its main roads and it is now all set to roll out India’s biggest public bike sharing project.

Chandigarh Smart City Limited (CSCL) is implementing the bike sharing project which has been in the offing since May 2016, when it was listed as a priority for the Smart City project.

“Chandigarh has the potential to emerge as the cycling capital of India. The city has all that it takes to adapt cycling as a means of mass transport,” says K.K. Yadav, Chandigarh Municipal Commissioner and CEO, CSCL.

Yadav is absolutely right in his observations. Chandigarh, the ‘beautiful city’, has a sophisticated network of roads and is small in size (144 square km), which means that most destinations are at a cycling distance. The city’s designer, Le Corbusier, made provisions for dedicated cycle tracks to run parallel to the main roads while planning the road system as far back as the 1950s.

Yadav says the topography of the city, which is largely a flat plain, is also well-suited for cycling. “Besides, in the post-COVID environment, people are still not very comfortable about travelling in buses or even cabs. We will be promoting cycling in a big way.”

One fallout of the coronavirus pandemic is that people across the world are turning to cycling as their preferred means of mass transport. According to a World Economic Forum report, approvals for a cycle to work scheme in the UK are up by 200 percent, with a corresponding decrease of 40 percent in car usage. Governments are implementing policies that encourage use of cycling to go to work. Italy and Colombia have increased cycle lanes and banned select roads for cars in a bid to support active travel. 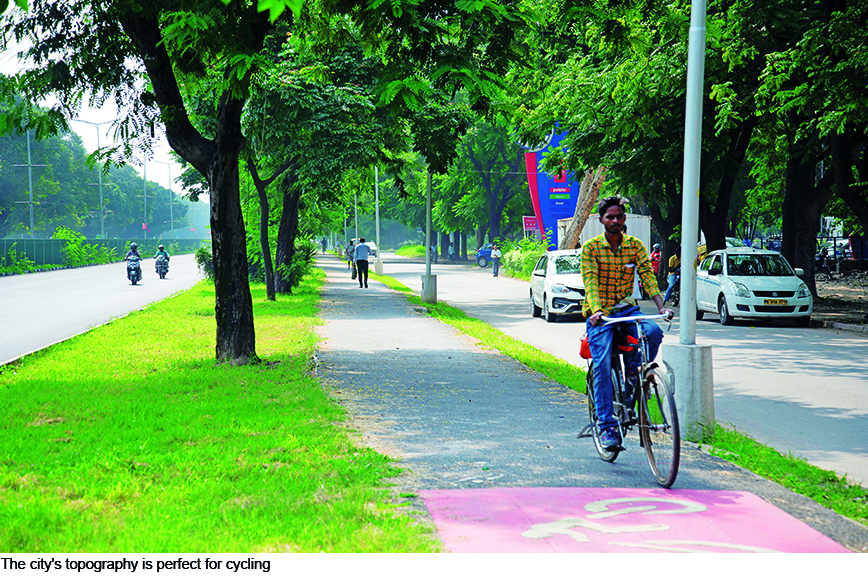 Indian cities like Bengaluru have seen an uptake in use of bicycles. In Pune, a group of businessmen from Pimpri-Chinchwad has initiated a drive to collect old bicycles and hand them over to schoolchildren after repairs to make them road-worthy.

The trend has multiple advantages. It helps social distancing, reduces air pollution and helps people get some exercise at a time when gyms and health clubs are closed.

Ironically, though the infrastructure is there, the trend is yet to catch on in Chandigarh, India’s most bicycle-friendly city.

CSCL is implementing the project in public-private partnership (PPP) mode. The contract is being operationalized by Smart Bike Mobility Limited, a Hyderabad-based company that had earlier implemented a similar project in Bhopal. The administration has identified 617 cycling docks across the city and will be stationing 10 GPS-equipped cycles at each of these points. A CSCL project manager says that the spots have been identified based on need-guided criteria, with preference given to bus stands, institutions, marketplaces, commercial establishments, gardens and other social hotspots frequented mostly by citizens and visitors to the city.

Under the terms of the agreement, Smart Bike Mobility will be paying Rs 12 lakh per month for the next 11 years to the Municipal Corporation. “We are not spending anything on this. The cycles will be acquired by the private company. They will generate revenues on their own through user charges, and advertisements. This is the largest cycle-sharing project of its kind in India,” says N.P. Sharma, Chief General Manager, CSCL.

CSCL, though, took more than two years to finalize the modalities of the project. It finally completed the tendering process in January 2020. “The role of CSCL will be largely to monitor implementation. Each cycle station will have 54 square feet for advertisements and cycle designs will be pre-approved by the CSCL,” says Sharma.

Users will be required to pay Rs 5 for half an hour as rental charges. The cycle can be returned at the nearest docking station. The onus will be on the vendor to pick up the bicycle. The company will establish a 24x7 smart control room along with an application and a website, which can be used to make payments and book a ride.

The vendor has signed a service agreement and furnished a bank guarantee to ensure that standards are met. The vendor will ensure that no docking station remains empty and not more than five percent of the bicycles can be given for repair at any point in time.

The company had earlier carried out a pilot run of the project in the Sector 17 plaza, where it established 10 docking stations with 100 bicycles. “Our target market will largely comprise the demographic set between 18 and 50 years of age. The response was more than what we expected. Interestingly, people preferred to use our mobile app and make payments through it. We will be implementing promotion schemes in the initial days to spread awareness and encourage people to take up cycling,” said a project manager of Smart Bike Mobility.

Payment options will include multiple plans. The user will be able to use channels such as PayTM, mobile wallets and QR codes, apart from cash payments. The project is being modelled on the New York City bike project. 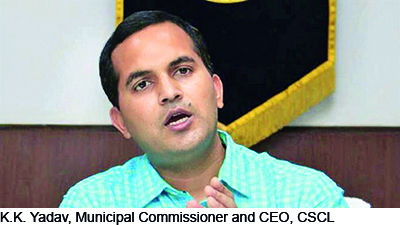 “As of now, the COVID pandemic has delayed the project by three months. But work has already begun from June 1 and we expect to launch the first phase with 600 smart bicycles by November-end,” said Yadav.

Sharma said the company had already started backend work such as software development, importing cycle parts, and customizing GPS systems. The CSCL has given a time-frame of one and a half years for the company to complete the project.

However, the city’s attempts at popularizing use of bicycles in the past have failed. “The administration never took it seriously. Even the expansion of cycle tracks was done at the instance of a judgment by the  Punjab and Haryana High Court in 1914,” said Navdeep Asija, traffic adviser to the Punjab government.

An overall lack of planning has marred the city’s cycling plans in the past. For instance, the Chandigarh Industrial and Tourism Corporation (CITCO) had stationed 10 bicycles at a cycle shed in Sukhna Lake in 2006. The project, however, failed to find any takers.

The project was revived again in 2016, but with the same results. The reason for failure: the city did not have any other docking station and users were required to deposit the cycles at the Sukhna one at the end of the ride! 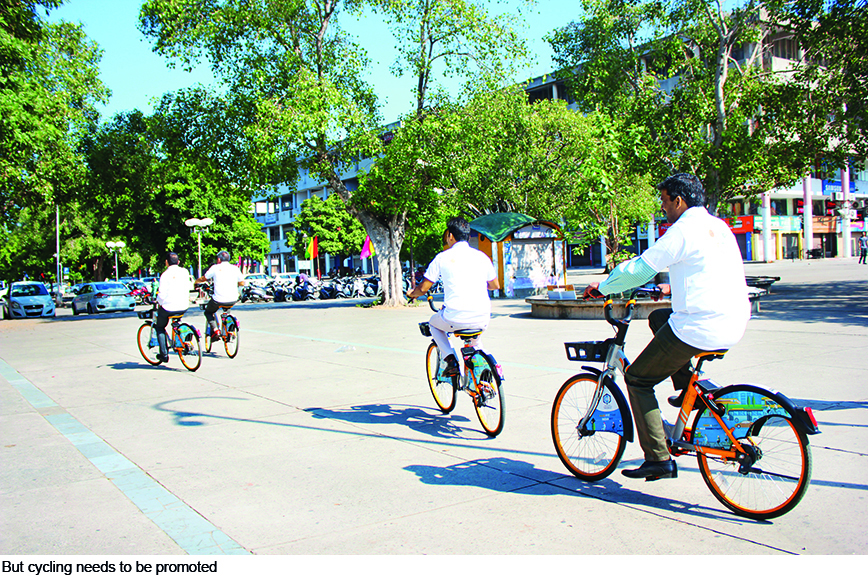 “So far, what the administration has done is merely symbolic. There has been no sustained effort to promote cycling in the city,” said Gurjusjit Singh, president, Chandigarh Cycling Club.

In fact, Panchkula, a neighbouring city in Haryana, has stolen a march over Chandigarh in implementing the cycling project. Though Panchkula started with only 250 bicycles, according to information available from the municipal corporation of Panchkula, the project has taken off and is attracting an increasing number of users.

Hopes ride high on Chandigarh’s present cycling project. “Panchkula has done well to implement the project. I don’t find any reason for it not to be a big success in Chandigarh if implemented in the right spirit,” said Vivek Atray, former IAS officer and now a member of the Advisory Committee to the Administrator, Chandigarh.