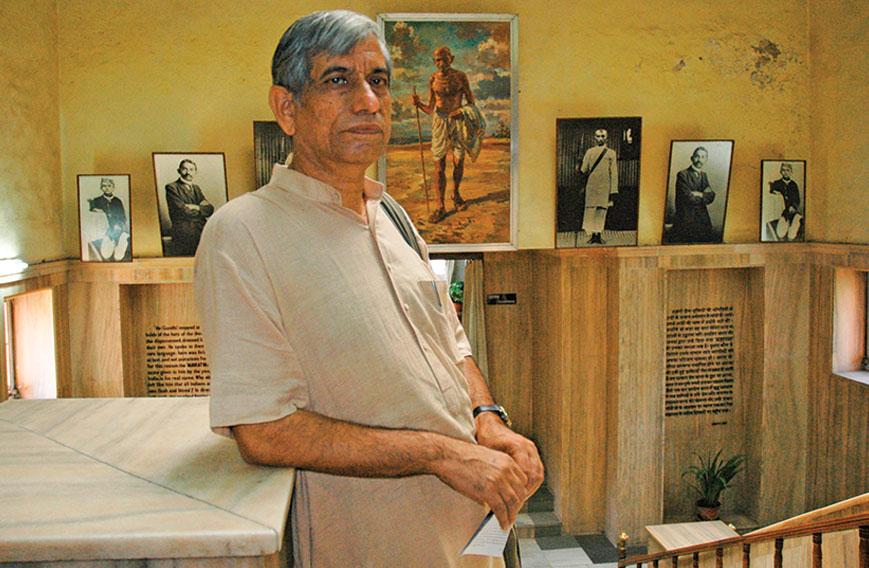 Water Guru is No More

The thirteenth anniversary issue of Civil Society with the Hall of Fame 2016 was out from the press and I had gone to Anupam Mishra’s home to give him a copy. He looked at the picture of Uncle Moosa on the cover and said: “Yeh aadmi apne chhote kaam se kitna kush hai. Iska kurta bhi khush hai!”

It was Anupam Mishra’s trademark humour, delivered with his customary mellifluous touch. But like everything about him, it was also full of meaning. As India’s foremost authority on traditional water harvesting systems, he recognised the value of small and sustainable community efforts. So, in one glance, he could see Uncle Moosa’s sense of fulfilment from creating tiny libraries in the remote villages and towns of Arunachal Pradesh. Not only was Uncle Moosa radiating happiness, but his kurta, too, was happy!

Anupam Mishra passed away on 19 December just three days short of 69. He succumbed to a brief but sapping encounter with cancer. He was a member of the advisory board of Civil Society magazine and my consistent and untiring friend.

Working for the Gandhi Peace Foundation (GPF) on a miniscule salary, he spent much of his life as an unsung researcher. He really didn’t want it any other way. But as word spread of his deep understanding of water and conservation and the brilliant traditions of communities, he came to be valued as a speaker.

He was insightful and funny and dispensed his wisdom with a light touch. He would receive invitations to speak from across India and abroad. What he liked most was to help community groups. Towards the end he would accept most invitations and zip off every now and then, almost as though he knew he had to beat the clock. He addressed villagers, doctors, engineers, architects and people in government.

But he always found the limelight intrusive. A cover story on him in Civil Society in 2006 was done through subterfuge. He similarly had to be talked into allowing pictures to be taken and it meant leveraging all the affection he had for my son, Lakshman, who did the shooting. We headlined that cover story, The Water Guru — nothing less would do because so many ‘water men’ already existed! 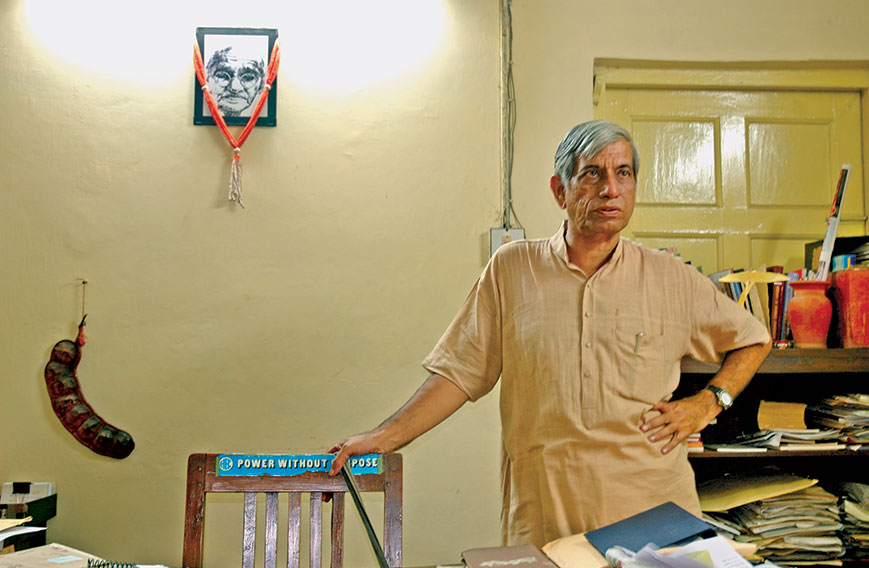 Anupam Mishra in his room at the Gandhi Peace Foundation

He was a firm believer that quality and output were in no way related to money. He didn’t see merit in chasing funding in the typical NGO way and too much money was definitely a bad thing in his opinion. Nor was he impressed by mere slogans and shibboleths. Social initiatives had to be community efforts  which were self-sustained and purposeful. It was important that they be well directed. He abhorred aggressive behaviour, insisting that change could only come through persuasion and love.

So it was that on a shoestring budget he brought out Gandhi Marg a small, beautifully produced and professionally edited magazine in Hindi. Till the end he and his wife, Manju, would read the proofs themselves. Pieces in Gandhi Marg would be extensively rewritten so that they acquired a simple and easy flow.

He wholeheartedly endorsed Civil Society’s mission of being a small and independent magazine committed to high production standards and clear editorial values. He also agreed with us that it had to be a business to be recognised as journalism, instead of being an NGO or foundation where the funding would decide the content.

It was smallness and community effort that also drew him to the Civil Society Hall of Fame. He was on the jury and, together with Manju, made it a point to be at every annual recognition ceremony. It was only at the last one on 12 November that he and Manju weren’t present because he was too unwell and in hospital.

Rita and I went to meet him the night before the event and though we chatted and he was alert, it was clear that the cancer was winning. He asked to be phoned from the venue so that he could know that the event had been held nicely. Of course I did that once the citations had been presented and he wanted to know why he couldn’t hear Indian Ocean playing in the background. I told him it was because I had walked a bit down Lodi Road to see off Dr Mashelkar, who was our chief guest and was leaving a little before the end.

In a lifetime of barefoot research for GPF’s Environment Cell Anupam scoured much of the country trying to understand collection, storage and dispersal in traditional water systems. He tracked tanks and stepwells like no one else in India has. He went deep into cultural practices and forgotten technologies in his quest to learn how communities deal with water scarcities and equally daunting problems of surplus in India’s driest state, Rajasthan. 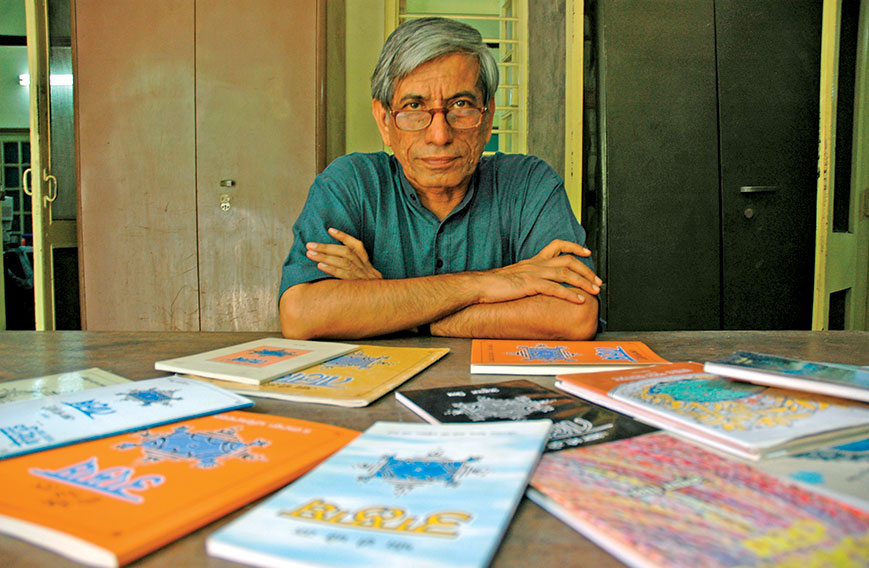 With copies of the Talaab book in different languages

NO ROYALTY, NO COPYRIGHT

Much of this learning has gone into two books in Hindi: Aaj bhi khare hain talaab and Rajasthan ke rajat boodein. The first title has done over 100,000 copies, which must surely be a record in Indian publishing. Anupam hasn’t taken a rupee by way of royalty nor does he have the copyright. Anyone is free to print the books.

Both his books have inspired people to do their own thing with water. Many have gone from being casual readers to avid practitioners — digging tanks, building bunds and generally trapping rainwater where it falls.

Anupam’s quest was a Gandhian one. His strength was his empathy and compassion which allowed him to go deep.  His was a search for solutions that involved people, particularly those who don’t have a voice and live in the fragmented fringes of the economy. He spoke their language and wasn’t in a hurry to understand their lives.

The Gandhian way is of governance through self-help and articulation of local needs and solutions. Nothing perhaps serves the management of water better in India because it is hugely diverse in topography, far-flung and beholden to a few months of rain in the year.

The research that Anupam undertook in the Environment Cell of GPF was really aimed at learning how people met their own needs for water for thousands of years before the centralised model of administration arrived under the British.

It is this perspective that led him to celebrate not giant irrigation works and other temples to technology, but the humble tank. Two million tanks had been dug by communities before British rule and they worked efficiently for people by collecting rain and raising groundwater levels. They were a dependable source of safe water. Importantly, tanks could be built by leaving habitats intact and because there was a sense of ownership over them they were maintained.

The tank, the bund and the well for centuries served to keep the hydrological cycle in good health. People knew how to make and maintain them. They drew on them with an eye on the sky, being conservative in times of scarcity and leaving surpluses in the bank for difficult days. There was balance.

For instance, a johad in Churu district in Rajasthan is a marvel of engineering. It has three tiers on four sides. Till the rains end in September, water collects and comes to the top. As the months pass into winter and then to March and summer, the open water surface reduces to half together with the depth. What does this do? It reduces the evaporation. In addition, there is a narrow ledge at each level to trap silt. Why does this matter? If the silt were not trapped, it would go all the way to the bottom and getting it out of there would be much more difficult.

Similarly, the Toda Rai Singh tank was built at least 350 years ago and was meant to serve the irrigation needs of 18 villages. Incredibly, it continues to perform that role though it has been acquired by the irrigation department of Rajasthan.

What happened to these tanks and stepwells, many of which were built with great effort and expertise and can even today be regarded as marvels of engineering? Why did Anupam need to put in years of dedicated exploration to rediscover these subtle equations in water if at one time they did so much for people? Many of them remain in use today and are more reliable sources of supply than what the government has set up. Why then was it essential to seek so hard to understand their worth?

The answer lies in the shift to a centralised regime under the British and the continuance of such a top-down model of governance in independent India. Management of resources such as water and forests went out of the hands of the people who depended on them and into the files of an amorphous government. Over the years local initiatives petered out and efficient traditional technologies went into disuse.

By the late Seventies and early Eighties it was clear that serious problems related to water were looming up. Irrigation departments and their engineers couldn’t deliver to people what people had been able to give themselves with efficiency at one time. That gap has only widened.

It was in the late Seventies that Anupam  began working as a young researcher, in the Environment Cell of GPF. His father, Bhawani Prasad Mishra, the poet, was a Gandhian and a freedom fighter.

The journey to GPF was, therefore, a short one. However, it wasn’t an inevitable journey because Anupam had a Master’s in Hindi literature and perhaps it would have been natural for him to choose teaching as a career. But the first job he got at GPF was to read proofs for Rs 350 a month. Very quickly he became involved with the Environment Cell. The first area of concern was water and Anupam found himself travelling across the country for his research.

It is a strange conspiracy of circumstances that seems to have made a water researcher out of a poet’s son. Anupam has a flair for writing and sensitivity to cultural traditions and both have proved to be vital in seeking an understanding of the problems relating to water.

A student of literature on the other hand has no hesitation in entering through cultural trapdoors in search of lost science and technology. “Technology gets absorbed and embedded in culture. Rediscovering it means understanding culture first,” Anupam explained.

So it was that Aaj bhi khare hain talaab got written over 10 long years and published in 1993, a slim book almost poetic in design, embellished with fine line drawings and packed with vivid accounts of community efforts in water.

In 23 years, this book, going from hand to hand, growing from one imprint to the next, has done more to change the way people think about water than any other work. It is available in Hindi, Marathi, Punjabi, Bengali and Urdu. GPF only publishes one of the Hindi versions. It is always sold out even before it comes off the press. All the editions, apart from the GPF one, have been brought out by people who have read the book and felt influenced by it. Stories abound about each imprint.

Perhaps this is the only example of its kind of community publishing and absence of copyright for truly original work. It is not insignificant that such an effort should relate to water. So severe are the scarcities that the country is facing and so ineffective are the efforts of governments that people feel the need to take over as they once did. 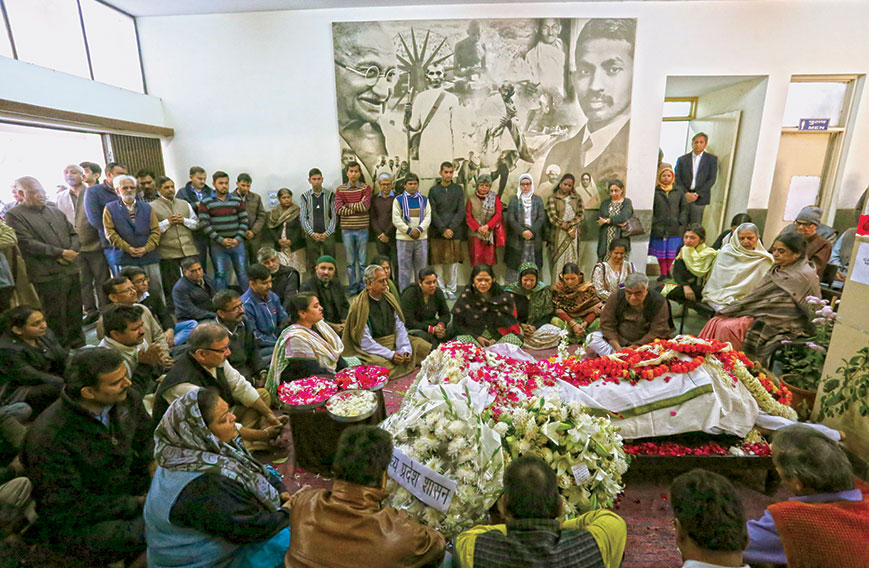 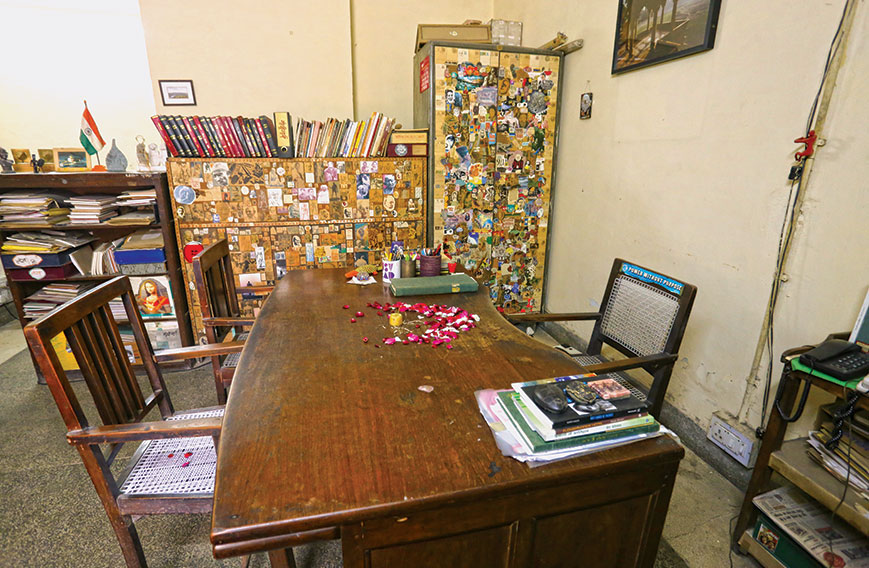 His empty room with his desk