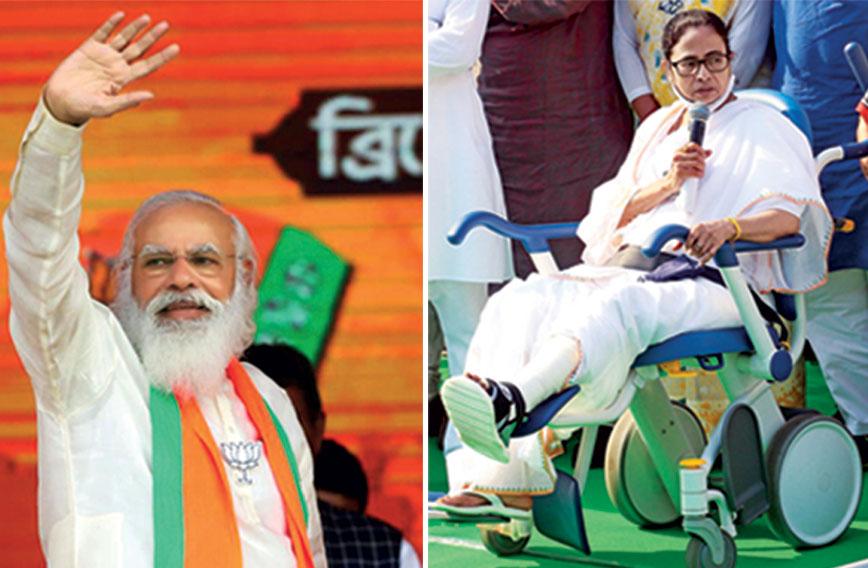 Hindutva vs Bharat in big fight for states

INDIA, that is Bharat, shall be a Union of States. Thus begins the Indian Constitution. The ‘Hindu nationalist’ Bharatiya Janata Party (BJP), as it has come to be widely called, confronts the deep-seated loyalties of the Indian people based on language, culture, ethnicity and caste as it challenges what have come to be called ‘regional parties’ in the on-going state legislative assembly elections across the sub-continent.

Over the past six years, ever since the BJP secured an absolute majority of its own in the Lok Sabha, Prime Minister Narendra Modi has asserted his party’s hegemonic dominance in governance and politics across the country. Yet, in large parts of India the voters’ multiple loyalties beyond religion have come to challenge the so-called nationalist discourse of the BJP. With the singular exception of Gujarat, where the BJP has remained in a dominant position for a long time, the party remains confined to Hindi-speaking regions of the country. In Karnataka it virtually stole an election to form the government and its writ is still constrained by the state’s caste and linguistic loyalties that limit the scope of the BJP’s religion-based nationalism. In Assam too the BJP’s base has still not consolidated itself.

Nowhere is this contrast between the ‘Hindu-Hindi nationalism’ of the BJP and the ‘regional’ and caste loyalties of the electorate more stark than in the states of Tamil Nadu and West Bengal. Even though Andhra Pradesh was the first ‘linguistic state’, so to speak, it was Tamil Nadu that brought the politics of language, culture and ethnicity to the centre of national politics with its anti-Brahmin and anti-Hindi movements of the 1960s. Ever since Anna Dorai’s Dravida Munnetra Kazhagam (DMK) displaced the Indian National Congress in Tamil Nadu, the politics of the state has always been about ‘national’ political parties aligning themselves with one or the other ‘regional’ party.

In many ways the same is true of West Bengal. Even though the Left Front, comprising the two communist parties, the CPI(M) and CPI, and a couple of other locally relevant political platforms, was constituted around a secular political ideology based on class mobilization — of workers and peasants — the reality is that the CPI(M), under the popular leadership of Jyoti Basu, tapped into Bengali sentiment to hold sway over the state for three decades until that sentiment swerved towards yet another Bengali leader, Mamata Banerjee.

Tamil Nadu and West Bengal, notwithstanding all the dissimilarities between them, have for long been bastions of powerful regional political loyalties that have overpowered national political parties. The outcome of the 2021 assembly elections will determine whether or not this regional sentiment remains intact and will hold its own against a renewed nationalist onslaught, this time launched by the BJP. The Left Front and the Congress party have been reduced to marginal players in both states.

In many ways the same factors are in play in the other states going to polls, including Assam where the BJP has established its presence based on a combination of regional and Hindu nationalist sentiment. However, unlike in the last round of assembly and Lok Sabha elections, this time Assam too is divided between the politics of regional and national sentiment.

The Left Front versus Congress-led front politics of Kerala has also been about more than economic and political ideology. Beneath the veneer of ideology, both communal and caste loyalties have played a significant, if not central, role in Kerala’s politics. Given the pre-existing communal division of political loyalties, and the significant share of ‘minority communities’ — Christians and Muslims — in the total population, the task for the BJP in Kerala is more complicated. How can it ensure that the majority Hindu community, and significant caste groups within it, switch their loyalties away from the Left Front? Indeed, if Kerala’s minorities decide to vote for the Left Front, switching their traditional loyalty away from the Congress-led front, then the incumbent Pinarayi Vijayan government may find itself back in office.

Interestingly, even into late March (when this comment is being written) there is still no evidence of a strong anti-incumbency sentiment in any of the states going to the polls. On the contrary, in almost all states the incumbent and the challenger seem evenly poised. Opinion polls in early March have given incumbents — the Trinamool Congress (TMC) in West Bengal, the Left Front in Kerala and the BJP in Assam — an edge over their challengers in their respective states. It is only in Tamil Nadu that early polls indicate the challenger DMK to be in a stronger position than the incumbent All India Anna DMK (AIADMK).

THE SEARCH FOR LOCAL ICONS

For all its Hindu-Hindi nationalism the BJP has adapted itself to this regional and linguistic reality of Indian elections. Indeed, even in Gujarat Narendra Modi has fully exploited this factor, not leaving his political appeal to be defined purely in terms of the national party’s Hindu-Hindi platform. Gujarati ‘asmita’ has been the cornerstone of Modi’s politics in his home state. Indeed, one could suggest that Modi has in fact morphed Sardar Vallabhbhai Patel, one of the tallest national leaders of the Indian national movement and the Indian National Congress, next only to Mahatma Gandhi and Jawaharlal Nehru, into a symbol of Gujarati pride with the installation of one of the world’s tallest statues.

In an extension of this strategy, which is in fact no different from the politics of the Congress party, Modi has appealed to Bengali ‘asmita’ in West Bengal, Tamil loyalties in Tamil Nadu, Assamese sentiment in Assam and to Malayalee pride in Kerala.

While the railways and Metro engineer E. Sreedharan made some gestures to Hindu sentiment in making his rapid transit to a politician’s avatar, the BJP has used him to tap into Malayali pride. After all, 21st-century Kerala has been built by its talented emigrants — from engineers, electricians and construction staff in the Gulf to qualified nurses in hospitals around the country. As the Malayalee engineer who built New Delhi’s Metro, Sreedharan symbolises the emigrant professional who has done Kerala proud.

In Tamil Nadu the BJP hoped to tap into regional sentiment by attracting film star Rajinikanth to its side. Rajinikanth’s withdrawal from politics after several years of contemplation, ostensibly on health grounds, has left the BJP stranded. The DMK and AIADMK have always been fair weather friends of national parties in power in New Delhi. Both have been in alliance at one time or another with both the BJP and the Congress. Hence, the contest in Tamil Nadu remains one between two and more Dravidian parties.

The battle in Bengal, however, is truly between Hindutva and Bengali nationalism. It is for this reason that the BJP’s inability to project a Bengali leader as its chief ministerial candidate remains its Achilles’ heel. To make up for this the BJP has depended partly on crossovers from the TMC and partly on the popular appeal of individuals like cricketer Sourav Ganguly. The BJP has also tried to adopt longstanding heroes of the Indian National Congress like Netaji Subhas Chandra Bose and Rabindranath Tagore, in the manner it did in Gujarat with Sardar Patel.

Each of these efforts to appeal to local linguistic and cultural loyalties of the voter, apart from caste loyalties, shows the limitations of using only a pan-Indian ‘Hindu-Hindi’ platform. While Modi’s charisma, the BJP’s and RSS’s organizational skills and money power, and the virtual absence of a credible opposition have helped Modi return to power in New Delhi in 2019, at the state level the BJP and Modi have been forced to adapt to local social, political and cultural realities in seeking voter support. Even in the small state of Goa, the BJP was forced to send Modi's defence minister, Manohar Parrikar, back to his home state to utilize his local popularity to be able to form a BJP government. In the national capital, ‘city boy’ Arvind Kejriwal has repeatedly worsted the BJP in state and local polls, even though in elections to the Lok Sabha the BJP fared very well.

In states where the non-BJP parties have credible and powerful leaders the BJP has had a difficult time making decisive electoral gains. As a consequence, outside of Uttar Pradesh and Gujarat, and a clutch of smaller states, regional political leaders, including within the BJP, continue to hold sway. All this points to the continued tension between the national platform of a national political party and the regional factors that shape electoral outcomes in state elections.

WHAT IS AT STAKE

While the BJP has been able to acquire dominance at the national level, its position remains tenuous in state politics, especially where non-BJP parties have charismatic local leaders like a Mamata Banerjee in West Bengal, a Chandrashekhara Rao in Telangana, a Naveen Patnaik in Odisha, and so on. Where the BJP has its own local leadership, like Yogi Adityanath in Uttar Pradesh, the party is able to perform better. This would also explain the political survival of leaders like Shivraj Singh Chouhan in Madhya Pradesh, B.S. Yediyurappa in Karnataka and Vasundhara Raje in Rajasthan — all BJP leaders who are not beholden to the Modi-Shah duo in Delhi.

The results of the 2021 assembly elections will shape the future dynamics of this national vs regional debate in politics. If the TMC, DMK and the Left Front win in West Bengal, Tamil Nadu and Kerala, it will spur a new wave of coalition politics with a new coalition of the willing taking shape in the run-up to the 2024 elections. Other regional parties like the Telangana Rashtra Samithi, Sharad Pawar’s Nationalist Congress Party, Samajwadi Party, Rashtriya Janata Dal and so on may come together to challenge the BJP. On the other hand, if the BJP and its allies sweep these polls, Modi may well be tempted to push forward his idea of ‘One Nation One Poll’ — combining elections to the Lok Sabha with those to state legislatures — to ensure that his charisma plus the BJP’s Hindu-Hindi nationalism deliver power even at the state level, weakening the appeal of regional political parties and their clout at the national level.

The future shape of national politics and governance and the health of the federal system in an India that is a ‘Union of States’ will be shaped by the outcome of the state elections of the summer of 2021.

Sanjaya Baru is a writer and policy analyst. His most recent publication is India’s Power Elite: Class, Caste and a Cultural Revolution, Viking/Penguin Random House, 2021.