When thousands of students laid siege to the headquarters of the Delhi Police on the cold night of December 15, it was no ordinary protest. They could have been enjoying themselves hanging out someplace else, but instead they chose to be out on the streets risking their personal safety and confronting the police who had just hours earlier beaten up students of the Jamia Milia University.

The protesters came in a spontaneous show of solidarity from colleges across Delhi and their vigil with placards denouncing the police and the government continued into the early morning. They were asking for justice, for students picked up by the Delhi Police to be released,  and the right to be heard. They voiced their anger against  the Citizenship Amendment Act (CAA) and the proposed National Register of Citizens (NRC), which the Jamia students had raised their voices against. 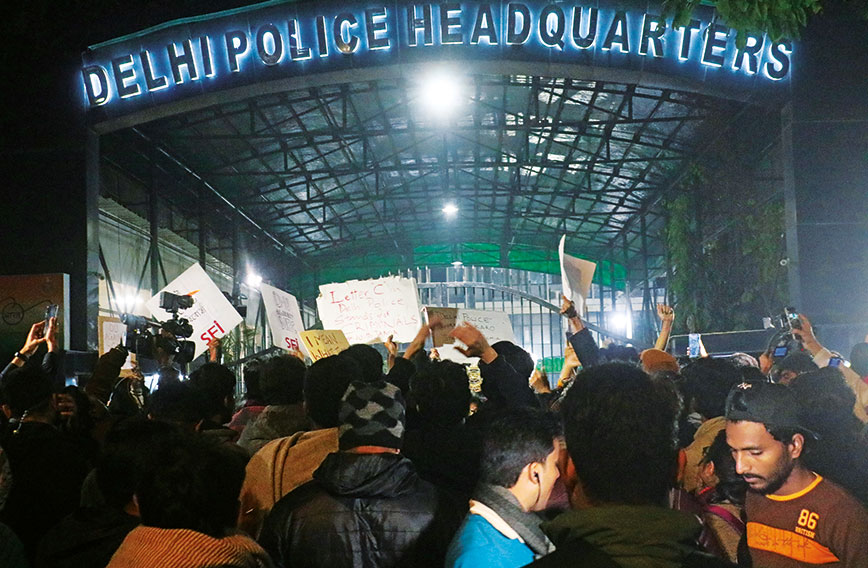 Campuses have recently witnessed growing unrest over arbitrary hikes in fees and curtailing of freedoms enjoyed by students. Confrontation with the BJP- led government has been growing. Student bodies all over the country have been coming out in support of each other.

The Jamia episode came on top of these tensions on the much graver issues of the CAA and the proposed NRC, which are seen as dividing India on the basis of religious identities.

As the students protested, they became the trigger for a much larger rising tide of anger. Close on the heels of the late night vigil in Delhi, came a spontaneous outcry from all over the country in Mumbai, Bengaluru, Chennai, Hyderabad, Lucknow, Ahmedabad, Pune, Kolkata, Mangalore and in cities in states of the northeast. 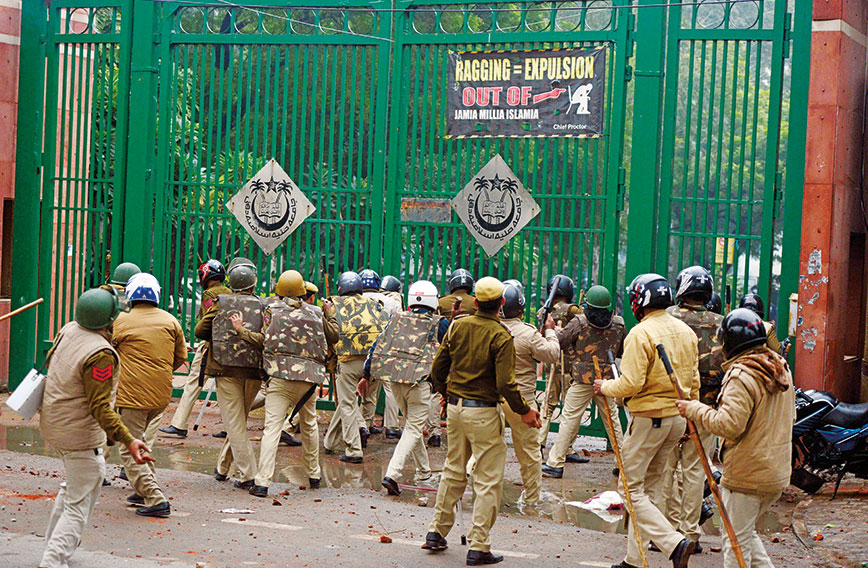 The tens of thousands who showed up at rallies in these cities varied from film stars to students and ordinary folk. They disapproved of the brutal way in which the students of Jamia had been treated. The police had entered the campus, fired teargas, beat up students, smashed windows and destroyed the library.

At another level, students wanted India’s secular character, under which all religions are equal, to be preserved.

There was sporadic violence too, noticeably in Uttar Pradesh. But at most demonstrations people expressed their dissent peacefully. In Delhi, students offered the police flowers. But the Union government, which controls the police in Delhi, responded with a heavy hand — declaring a lockdown, blocking Internet and mobile communications and closing metro stations. Protestors were bundled into police vehicles and taken away. 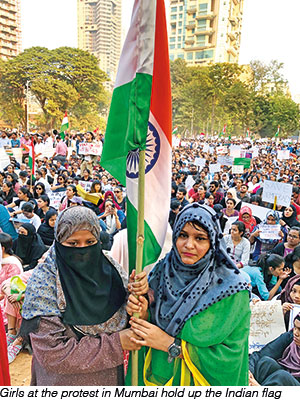 Elsewhere, in BJP-ruled states too there was a crackdown. In Bengaluru, the well-known historian and Gandhi biographer, Ramachandra Guha, was manhandled by police constables as he attempted to protest peacefully— a clip which showed him being pushed around by the police went live across TV channels and added to the increasing international embarrassment of the Union government.

The petition said: “The idea of India that emerged from the Independence movement, and as enshrined in our Constitution, is that of a country that aspires to treat people of all faiths equally. The use of religion as a criterion for citizenship in the proposed Bill would mark a radical break with this history and would be inconsistent with the basic structure of the Constitution. We fear, in particular, that the careful exclusion of Muslims from the ambit of the Bill will greatly strain the pluralistic fabric of the country.” 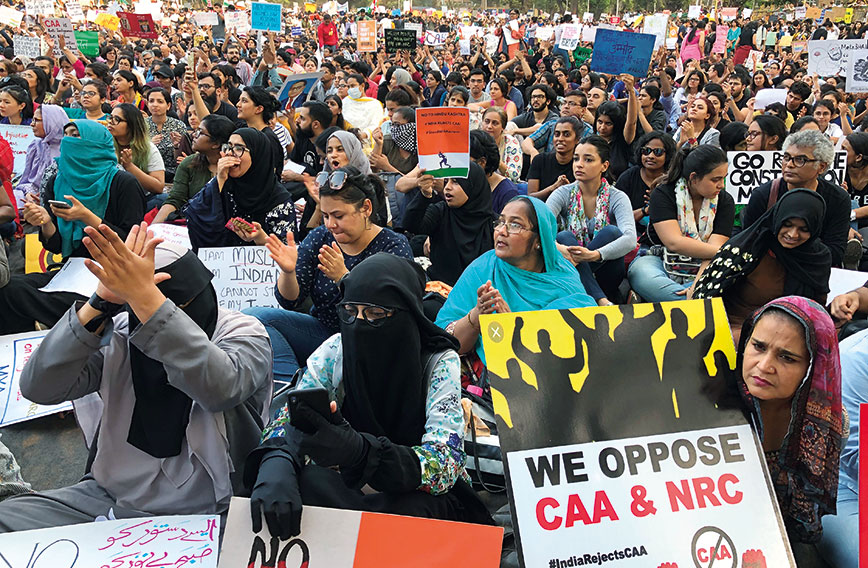 The proposed NRC will require all Indians to give proof that they are citizens of India by submitting documents. Meeting the NRC’s requirements could be a cumbersome process, which may be much beyond poorer citizens who might not have documents like birth certificates and proof of residence. The CAA, on the other hand, distinguishes between refugees on the basis of religion, leaving out Muslims but giving blanket acceptance to Hindus, Jains and Sikhs.

The NRC and CAA taken together could change India’s secular character forever and lead to unimaginable social and religious tensions. People worry about detention camps for Muslims who might not have their documents in place.

The Modi government insists that these are unfounded. “Muslims have nothing to fear,” Union Home Minister Amit Shah has repeatedly asserted in interviews. 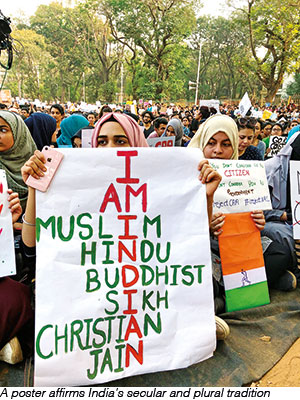 Both measures are mentioned in the BJP’s manifesto that brought it to power recently. But more than 60 percent of India isn’t governed by the BJP and so it isn’t speaking for everyone. Already nine states have opposed both the CAA and the NRC.  Implementing the NRC would be impossible without the support of the state machineries. An earlier NRC exercise in Assam ended in a fiasco and has had to be scrapped after causing much anguish to people. But people declared illegal migrants are still languishing in detention centres.

Why then has the BJP pursued the NRC and rammed the CAA through Parliament? Is it to merely tick the boxes of its election promises?  Or is it, as is being alleged, to distract attention from much bigger issues such as chaotic government finances, a sinking economy, lack of jobs, declining rural incomes and environmental problems?

Are these also the issues that have brought people out all over the country with the NRC and CAA being the triggers? Is there a deeper concern that the country is adrift and the government with its brute majority is not consensual enough? “This is a demonstration in support of our Constitution and our constitutional values,” Bhaskar said when she addressed the rally. Mumbai saw nearly 100,000 people join the protest and the Mumbai Police cooperated with the peaceful protestors.

In Chennai, classical musician and Ramon Magsaysay Award winner T.M. Krishna and actor Siddharth came out on the streets to show solidarity. “I think the message is very clear. This Act, in combination with the NRC, is being done to create a divided country, to create a majoritarian Hindu state. That has never been India civilizationally. We have to thank the youngsters and the students of this country. They have woken us up,” said Krishna.

In Delhi, on December 16, peaceful protests were held at India Gate. Priyanka Vadra and other Congress leaders staged a dharna there. But as they left, many more people arrived, congregating at the entry to India Gate. As the crowds grew larger, a policeman used a speakerphone and asked people to disperse from the entry, but to no avail. Three young men decided to climb up onto the barricades, calling to the crowd. People thronged to them. As the crowd grew louder and threatened to overwhelm the barricades, the police relented, letting people into India Gate, to a roar of approval from the crowd.

On December 17, students of Jamia called a press conference at which they showed the injuries inflicted on them by the police. One of the students had fractures in both arms and bruises on his chest. He was in the library when the police stormed in. In police detention, when he asked for a painkiller, he says he was denied medical care. A woman student said that when a group of students stried to go into a house to escape the police, they were dragged out to the road and beaten with lathis.

Another student was speaking to his mother on the phone when the police entered the campus. He told his mother that he might not survive. Students were overwhelmed and broke down as they relived the horrors of the last two days. 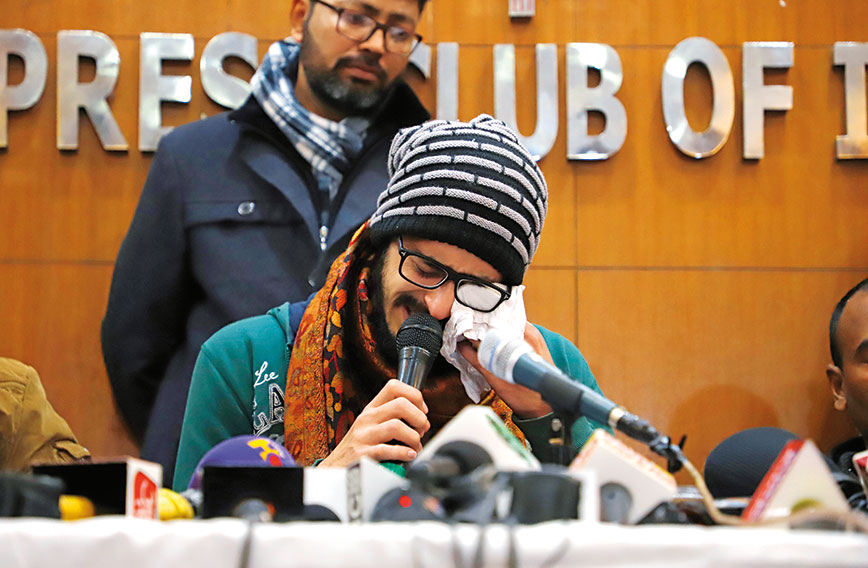 Farah Naqvi, a women’s rights activist, revealed that when activists and lawyers gathered outside the police station on 15 December, they were not allowed to enter. When an activist and a lawyer were allowed inside, their mobile phones were taken away and they were barred from getting the students to sign on any document. In police detention, students were denied access to medical care and when they were finally released at 4 am, they were badly injured, she said.

Anger has been simmering in campuses across India, expressing itself in outbursts now and again. Students in Delhi initially united against police brutality. By taking up the  CAA and the NRC, which Jamia’s students were agitating against, students highlighted an issue which has been deeply troubling India’s people — the erosion of secularism.