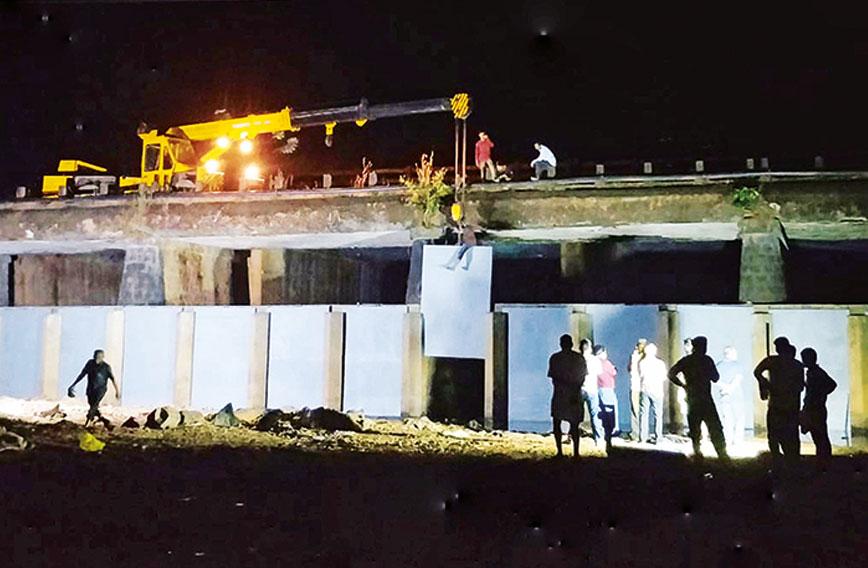 With dream dam farmers show what is possible

A check dam built by farmers across the Kodungai river has caught the attention of government officials and farmers living nearby. The dam is five kilometres from Vittal town in Dakshina Kannada district of Karnataka. Drive 75 minutes from Mangaluru and you will arrive at the site.

Why is this check dam in the spotlight? Here’s the reason: the government built two check dams on the Kodungai and spent around Rs 1 to 1.25 crore on each. A group of farmers, further down the river, built this check dam for just Rs 18 lakh.

The government’s check dams are only about 120 feet wide. The farmers’ one is 165 feet in width.

None of the farmers had any theoretical or practical knowledge of constructing such a check dam, though two members of their core team, Pidamale Govindaprasad and Rajaram Balipaguli, are also qualified mechanical engineers.

“We didn’t have a ready model to follow for this huge check dam,” admits Govindaprasad. “A cousin supported me morally. Shrikantha Padaru, a fellow farmer who wasn’t even a beneficiary, gave us Rs 20,000 and wished us luck. My mother gave me full moral support. She said constructing such a check dam is equal to constructing a temple.”

After word spread of the check dam built by farmers, a team of government officers from neighbouring Kasaragod arrived to see it.

“This is proof that cost-effective models can be very practical. The difference in government estimates and the cost incurred by locals for the same structure is amazing. Unfortunately, such people’s initiatives don’t come to the notice of the government,” remarked E.P. Rajmohan, special officer, Kasaragod Development Package (KDP), who headed the team which included engineers from the minor irrigation department and soil experts.

KDP is a state government agency. Its mandate is to speed up the development of Kasaragod district.

The farmers’ check dam is an innovative one. It has been positioned just under an old, abandoned bridge. Big galvanized iron sheets are used as shutters to close the vents in this vented dam. It was commissioned in December. Farmers designed it themselves and completed construction in just eight months.

Why did farmers do the government’s job? Actually, they had constructed a temporary check dam across the Kodungai every year for the past five years. This too was an innovative check dam, locally called a katta.

At the end of summer, the farmers would dig a trench across the riverbed. A long plastic sheet would be attached to this trench and kept rolled up. During the monsoon, floodwater would flow above this roll. After the flow receded, using a polkline (hydraulic excavator), a huge bund made of sand would be raised slightly behind the roll. The plastic roll would cover this bund from the inner side to check water seepage.

This temporary check dam would stock an extremely large quantity of water. But the problem was its stability. With water rising in the adjoining government check dam, the farmers found their sand bund would begin to loosen.

“We had been constructing this sand and plastic sheet check dam for the past five years. Except for one year, it was breached every year,” says Govindaprasad.

This temporary check dam used to cost the farmers around `50,000 to 60,000. When it ruptured they would spend an equal amount to repair it. Since the dam collapsed almost every year, most recently in April, their loss was considerable.

“We realized our only solution was to construct a semi-permanent or a permanent check dam,” say the farmers. But they didn’t know how to go about it. The river is about 165 feet wide here. The farmers estimated that a vented dam in their area would cost around `1.5 crore.

Getting the government to construct one would be a slow and tough task, they mused. Could they build it on their own, they wondered. Impossible, said some. But the ‘crazy idea’ persisted.

Initially, they decided to construct an improved check dam using areca nut wood and a plastic sheet. But they soon realized that this too wouldn’t be able to withstand the river’s hydraulic pressure for long.

“Since the very beginning, Govindaprasad put in a lot of effort. It is his determination that took our dream forward,” recalls Palligedde Narayana Bhat, another farmer who was in the forefront of the effort. A core team of five farmers was formed when Balipaguli's brothers, Ravishankar and Dr Rameshchandra, joined.

The team wanted a strong check dam but one that it could afford. They had no models that they could refer to. The team visited a few innovative check dams built by farmers nearby. Among them were Nitile Mahabaleshwara Bhat’s concrete ring dam-cum-iron sheet check dam and an iron sheet check dam constructed by Aishwarya Earth Movers at Balnadu. Then they consulted a few local engineers.

But the farmers did not have the luxury of time. The monsoon was round the corner so they had to expedite matters. If the foundation of the check dam wasn’t constructed before June, they would end up incurring losses and it wouldn’t be possible for them to build their dam. So, in a week they readied their blueprint. 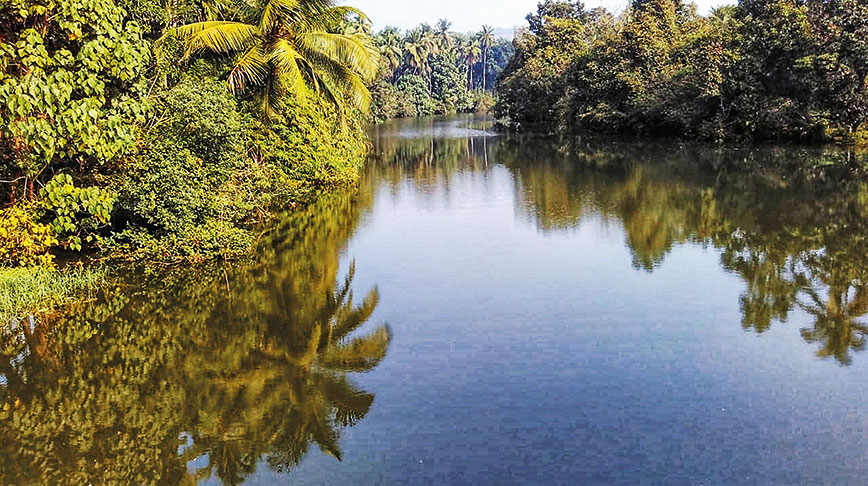 The design they finally opted for was this concrete vented dam with shutters made of galvanized iron (GI) sheets. The foundation and framework would be of concrete. The work was not given on contract. Labour was employed and supervised by the farmers themselves.

The old, unused bridge came as a blessing for the farmers. They built the dam so that its height almost touched the bottom of the bridge. Twenty-four pillars were constructed. GI sheets, nine feet in height and six feet in breadth, were bought. Grooves were made in the pillar to accommodate these shutters which had to be lowered from the top.

Each sheet weighed around half a tonne. It was not humanly possible to lift such heavy shutters and insert them into the grooves. The farmers’ team found a solution. They hired a crane from Vittal and parked it on the bridge. It required just a few hours for the crane to carry out the shuttering.

“We have inserted rubber beadings in between the sheets and the grooves. Initially, they didn’t get set and caused leakages. But once pressure from the water mounted, the beadings opened fully and checked the outflow,” points out Balipaguli. A 120 gsm (grams per square metre) ultraviolet stabilized plastic sheet covered the inner side of the check dam, in the same way they had used a roll of plastic to cover the earlier katta.

Two GI sheets are designed to release the stored water in case of flash floods. Instead of a single sheet of nine feet, these two sheets have been made in segments of six feet plus two feet plus one foot. So one to three feet of water can be released, if required. Of course, to do this, the crane has to be pressed into service.

“All of us worried about the strength of the check dam and the quality of its construction. That’s why we never left the site till the workers left. On the day the foundation was being laid, we worked till 10 pm since the engineer warned us that this work should be done in a single stretch since it would affect the safety of the dam,” recalled Narayana Bhat.

The water level in the river has now risen to nine feet across one kilometre. The stored water is around 14 crore litres. The water will be used for irrigation and it will recharge aquifers for a minimum of five months.

About 20 farming families are now directly lifting water from this check dam, using about 150 horse power. The check dam irrigates more than 40 hectares of areca nut gardens and indirectly benefits a radius of four km.

The abandoned bridge was creatively used

There are reports of the water table rising in many wells and keres (earthen tanks) and there is no need for the panchayat to supply drinking water any longer.

The farmers who built this check dam are big landholders as well as those with medium or small land holdings. No formal meetings were held and money was donated voluntarily. Balipaguli and his brothers gave money for the GI sheets and related expenses. Govindaprasad, Narayana Bhat, Chanila Venkappayya and Kana Udaya also contributed. The final accounts have not been completely tallied but the ultimate figure is around `18 lakh, says Balipaguli.

Before the monsoon, the shutters have to be removed, painted and stored under a roof. The shutters should last for a decade, say the farmers. “Out of 24 sheets, there is no leakage in 15. Nine are leaking a bit. We have to address that next year,” says Govindaprasad.

The media failed to take note of the check dam built by the farmers. But officials of the KDP did and they appreciated the effort. It could serve as a model, they felt.

“The self-help attitude of these farmers who did not wait for the government to make the dam, is really laudable,” says Rajan D., executive engineer, minor irrigation, Kasaragod. “Although they don’t have technical expertise, they constructed it at a low cost. But if they had consulted experienced engineers, they could have made the check dam still stronger. Now, if there is a flash flood, the crane has to be rolled out to take out the shutters. It would have been more convenient if the shutters could have been lifted manually. I liked their idea of using the abandoned bridge.”

The check dam has also roused the interest of fellow farmers. “Word is slowly spreading that if the beneficiaries join hands they can construct small check dams themselves, if not bigger ones like this one,” the farmers say with pride.

“We might not need to use our bore wells after a few more summer showers,” says Balipaguli. “About 52 bore wells in the area are being irrigated by this check dam. Dependence on them has come down drastically, though. This check dam is truly like a temple.”