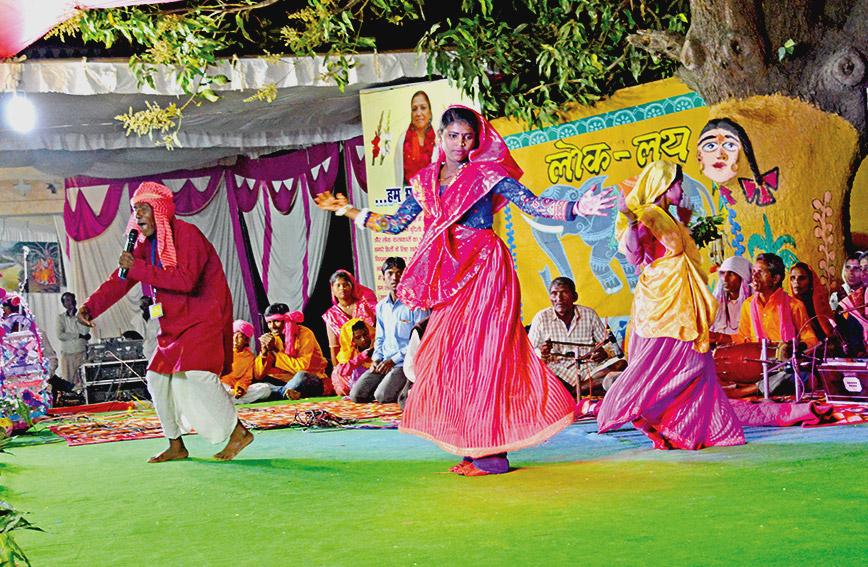 A folk dance at the Lok Laya festival

A subaltern music festival in Bundelkhand

Once again the unusual Lok Laya festival was held in Chitrakoot in Bundelkhand on 17 March. A celebration of folk music, Lok Laya is truly a people’s festival. Musicians, unshaven and tired from a night spent in crowded buses, dressed so ordinarily that you wouldn’t glance twice at them, suddenly grab your attention as they get onstage. Their voices are deep, sonorous and rhythmic. Their traditional musical instruments are rich with sound. There is never a dull moment. Performers and audience are in perfect sync.

The performers walk to the stage through the audience, singing and dancing. The audience claps and joins in. In group performances, a singer often gets up and begins to dance. A musician might get down from the stage and begin playing his instrument in the midst of the audience. Dhrupad, tanpura, dafla, the balma dance create a rhythm and energy that is infectious.

Lok Laya, which means People and Rhythm, has been taking place on and off for the last 15 years. “It depends on funds,” says Gaya Prasad Gopal, of the Akhil Bhartiya Samaj Sewa Sansthan (ABSSS), the man behind the festival. “We try to organise one in March and the other in October. The March one is slightly more devoted to dance and folk music and the October one to dhrupad.”

Bhagwat Prasad, director of ABSSS, says that when the Lok Laya festival is delayed because they don’t have money, folk artistes begin calling them persistently, asking why the festival isn’t being held.

This year Lok Laya was dedicated to the memory of Martha Farrell, a senior activist with PRIA (Participatory Research Institute of Asia), an NGO in Delhi. She was killed by terrorists when she visited Afghanistan as part of a delegation in 2015. Farrell was passionate about protection of folk art and had helped organise past editions of Lok Laya. Her husband, Rajesh Tandon, director of PRIA, said he was keen to convert Lok Laya into a dedicated event.

The musicians, artistes and audience are rural folk from the toiling classes. Kamta Prasad Kushwaha, 85, a noted dhrupad singer from Bigahna village in Banda district, and Saubhagya Dutt Tiwari, a well-known tabla player, were honoured.

Kushwaha, a farmer, has spent his life toiling in his field. But he is also an accomplished dhrupad singer who sings Kabiri — Sant Kabir’s compositions — with aplomb.

He told the audience that since age was catching up, he had sent a message to Avadhesh Kumar, a locally renowned music teacher, that he wanted to hear him play his pakhawaj (traditional drums) before he died. So Avadhesh arrived with his drums and the two created rhythm and melody that enraptured the village.

Avadhesh said the old singer was very careful about his sur-tal and couldn’t be faulted on a single note. Lallu Kumar Shukla, also a senior teacher of music, remarked that Kushwaha’s proficiency in lesser known forms of dhrupad was very impressive.

Gopal says folk music has a lot of relevance. It forms the basis of much that is rich in classical music. Kushwaha, for instance, isn’t the only dhrupad singer in Bigahna. The village has many more dhrupad singers. All of them are farmers and versatile in dhrupad. They also sing Kabiri.

Their traditions in music, dance and the performing arts may be rich but the artistes live in penury. It is unlikely that this heritage will survive unless it is provided patronage by the government. Recent research in several villages reveals high levels of distress among many talented folk artistes. Old patronages have dried up and new ones haven’t sprung up as yet. The artistes are very talented but they have been unable to earn anything.

Government funds are largely cornered by middlemen in cities who have only pretentious links with performers at the grassroots. Instead, the government should establish direct links with folk performers by listing their contact numbers on a website. This way folk artistes can be linked to tourism circuits and other events which are patronised by the government.

Dassi Manshah, a Dalit from Bharkhari village in Hamirpur district, is a fabulous singer of Kabiri, phaag and other folk genres. He comes from a family of bonded labourers and had to endure great hardship to become a singer and musician.

Ramjeevan, also from Bharkhari village, faced similar hardship. His education was interrupted because a local landlord forced his father to send him for cattle grazing. Ramjeevan had to accept this work but at night he trained himself to become a singer and dancer. He is today recognised as an accomplished tanpura player, a talented singer and dancer.

Naurangi Lal was born into a Dalit family that had to do manual scavenging. When his father tried to arrange for his education, he was chased away by the local school teacher. Naurangi was attracted to the dafla and became an accomplished dafla player.

Fadla Dom is another accomplished dafla performer from the Dalit community but he left for Gujarat as a migrant worker and not much has been heard of him since.

Babulia, a folk dancer from Patha region of Chitrakoot district, has caught the eye of even urban audiences but she struggles to make ends meet when she returns to her village.

Anand, a young singer, attracted attention for his balma dance at Lok Laya. He became a bonded worker in Meerut and special efforts had to be made by the ABSSS to rescue him.

These, then, are the tragic circumstances of many folk performers of great potential in Bundelkhand. That’s why Lok Laya is so relevant to their lives.

Folk music also forms the basis of classical music. “There is a school of thought which believes that even classical music owes its origin to folk music,” says Lallu Ram Shukla, former head of the department of music in Gramodya University in Chitrakoot. “The grammar of folk music was informal and unwritten. It was related to the sounds of nature like the blowing of the wind, the rustling of the leaves, the falling of raindrops, the sounds of animals and birds. Later these sounds were codified with matras, chhand and so on.

“It is in this context that we can understand why farmers like Kamta Prasad are able to sing some of the lesser known forms of dhrupad so immaculately even though these are hardly sung in urban musical concerts. This increases the urgency of saving folk music and dance.”