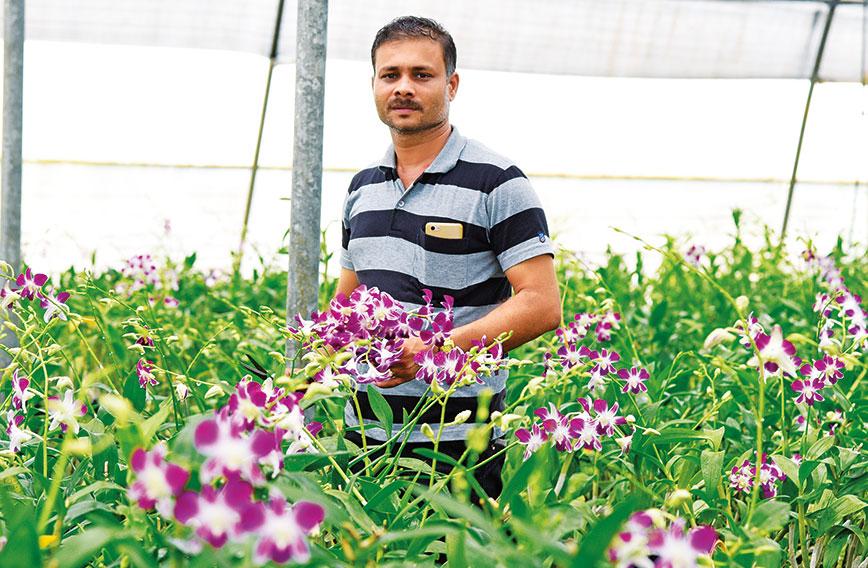 Umesh Tolu Gaonkar amidst his orchids

Orchid village: B’lore gets its supply from remote Cotigao ?

Umesh Tolu Gaonkar could have easily found a job as a lecturer in a college. He had offers as well — after all he was a postgraduate in Konkani. But he decided to seek his destiny instead in growing orchids.

Goankar lives in Cotigao, a village that is a blip on the map of Goa. Located over 96 km from Panaji, this village is right in the middle of the Cotigao wildlife sanctuary and it takes nearly three hours to get there.

The road that leads to the centre of the village is tarred and the drive through the lush green forest is smooth and peaceful. But so remote is this village that it is surprising to find 650 families settled here and making a living.

Gaonkar explains that they have been agriculturists, traditionally growing rice, jackfruit and cashew. But since 2014, they have made a hugely valuable additon to that list: orchids.

It all began with a visit by a team of the Organic Farming Society in Bengaluru. Given the market for jackfruit chips in Karnataka, the team was looking for a place to grow the fruit organically and their search led them to Cotigao.

It was the cool climate, humidity and the fact that orchids were growing in the wild which made them realise that this village would be ideal for growing the exotic flower which is in demand in the metropolis. They dropped the jackfruit idea and decided to make Cotigao a village of orchids instead.

“The Bengaluru team did most of the paperwork which was essential for availing of subsidy,” said Gaonkar. The initial investment is high as one has to construct huge poly-houses. Prior to shifting to the cultivation of orchids, Gaonkar’s family used to grow paddy on over 7000 sq. m. of land which
they owned.

Working with the state government, the Bengaluru team brought two experts from Thailand to Cotigao for a two-day training session for interested farmers.

“I decided to construct two poly-houses,” said Gaonkar, “one on a plot of 4,000 sq. m. and the second on 3,000 sq. m.” While poly-houses are relatively simple in design, the construction has to be robust. Thick galvanised metal water pipes are used to construct the superstructure because they do not rust. Transparent plastic sheets are then spread over to create poly-houses with openings for free flow of air to bring down the temperature.

Orchids do not grow in soil. Hence, rectangular plastic boxes are raised about two feet above the ground and filled with the outer covering of coconuts.

An irrigation system comprising of overhead and plant level sprinklers were installed because manual watering of the plants would increase labour costs.

Lastly, over 60,000 saplings for both poly-houses were purchased from Pune and thus began a venture that proved to be a winner for Cotigao, which is now home to about eight such farms.

Gaonkar had to make an initial investment of Rs 63 lakhs to get the project off the ground, most of which has been recovered through subsidy. Of the total sum invested Rs 45 lakhs came in the form of subsidy. “We have already received the state government component of the subsidy and the central government’s portion is awaited,” said Gaonkar.

Because it is isolated, Cotigao is relatively untouched by chemical fertilisers, which also makes it ideal for organic farming. “Our village has been selected by the state agriculture department for certification of organic paddy farming,” said Gaonkar. This would put this tiny village on the organic map.

The last time Cotigao made it to the front pages was in 2010 when residents launched an agitation to prevent a government plan from declaring the area as a critical wildlife habitat, a move that would have made it difficult to undertake farming activities.

Cotigao might not be making headlines today, but it is known in Bengaluru for its orchids. “Around 80 percent of the produce is exported to Bengaluru while the remaining is sold in Goa,” said Gaonkar, who transports the flowers to Karwar where they are put on the bus to Bengaluru.

For Gaonkar the day begins at five in the morning with a survey of the plants which produce white and purple flowers. “The white ones are preferred for weddings,” he said. Stalks of orchids which are ready for sale are cut, packed in plastic, placed in cardboard boxes and made ready for transport. Depending on the grade, a stalk could fetch between Rs 8 and Rs 15.

Since the plants are not rooted in soil they have to be provided nutrients which are sprayed manually every four days. “Initially, I used to do all the work myself, but now I have hired a labourer from Jharkhand,” said Gaonkar.

“If the subsidy is released within six months, this is a very good business,” he explained. “The input cost for the plants in both poly-houses works out to Rs 25,000 per month. This includes cost of fertiliser, electricity, and one labourer. And the produce is around eight to nine thousand flower stalks per month which fetch around Rs 1 lakh.”

The orchid experiment has awakened the village to profits in organic farming and Gaonkar is trying to link up with the Indian Council for Agricultural Research (ICAR) to provide machinery for packaging jackfruit chips with training and sponsorship from a corporate player.

So far has Gaonkar travelled in the last in two years since he started growing orchids that his farm merited a visit from Chief Minister Manohar Parrikar about a year ago.