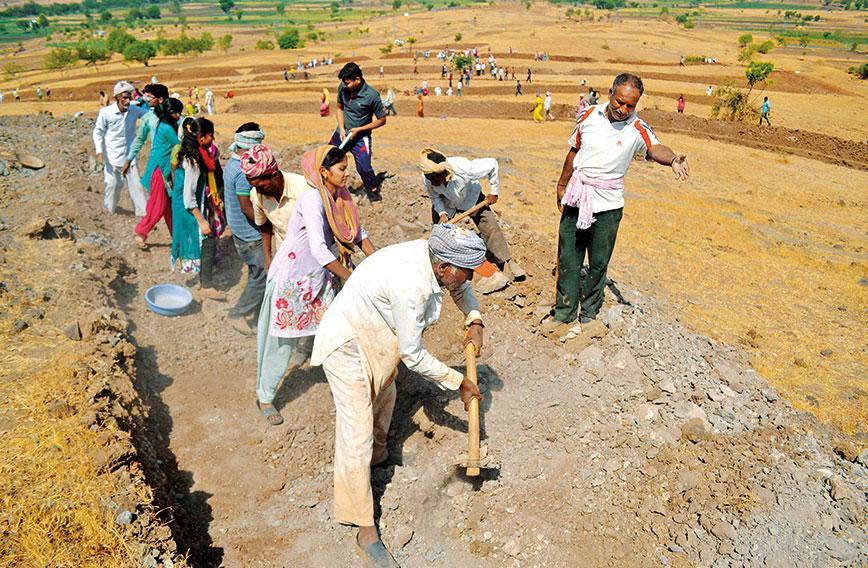 A MGNREGA worksite. Wages get delayed, rejected or money is sent to the wrong account.

Why MGNREGA workers are chasing their wages

Workers who fled cities to return to their villages because of the coronavirus pandemic rely on the rural jobs scheme to earn. Work is coming their way, but money is not reaching them quite so easily.

A report by LibTech India, ‘Length of the Last Mile: Delays and Hurdles in NREGA wage payments,’ reveals there are many hassles that rural workers face in receiving payments.

Payments are sometimes inordinately delayed, get rejected by the bank at the time of transfer, are partial and even end up in the wrong accounts.

It is MGNREGA workers who have to run from pillar to post to get such errors rectified and access their dues.

LibTech India are a group of social scientists, activists, engineers and data scientists, who have been closely examining the employment guarantee scheme and public services delivery in rural India. The report also has a well-written forward by economist Jean Dreze.

Making sure the payments reach people on time is important because villages are still full of those who left cities during the pandemic. Some have gone back to the cities they fled, but many haven’t. Getting work and money to them in a stressed rural economy needs to remain a priority.

Here are the findings of the survey:

Most MGNREGA workers (1,142) went to banks to access their wages. The next option was the business correspondent (BS) or the Customer Service Point (CSP). In Andhra, workers (252) went mainly to the post office.  Workers in Jharkhand faced the most hardship in getting their wages, whereas those in Andhra found it much easier.  Overall, workers found post offices provided better services than banks or BS/CSP.

People had faith in banks but both in Rajasthan and Andhra they had to walk several kilometers to the block headquarters to get to a bank or disbursement agency. Only in Andhra were disbursement agencies equally spread between village, panchayat and block, says the report.

Along with distance, rural banks are also very crowded. So, workers had to make multiple trips to withdraw their wages. There was no assurance they would get their money on one trip. Around 42 percent of respondents in Jharkhand and 38 percent in Rajasthan took more than four hours to access wages from banks. This was just two percent in Andhra.

The CSP/BC would seem to be the most convenient agency to approach since it is invariably the closest. But it took workers not less than three hours to access their wages and they made multiple visits due to biometric authentication failure. The CSPs also had poor internet connectivity and sometimes no electricity.

The worker loses a lot of money trying to get his or her wages. Two trips to the bank cost the worker Rs 100. Two days of lost minimum wages works out to Rs 342. Add Rs 25 for food. A worker could actually end up spending more than a third of her weekly MGNREGA wages to withdraw her weekly wages!

The problem could be simplified by just sending an SMS to workers when wages are credited into their bank accounts. But only 11 percent of workers received such SMSs. Around 36 percent had to visit the bank just to find out if their wages had been credited.

There is a real need to increase the number of rural banks and drastically improve the way they function.

The DBT cash transfer isn’t a fool proof system. Payments get rejected due to technical reasons or data entry errors by the administration. Basically the payment is attempted, it fails and the money goes back to the government exchequer.

But it is the workers who pay the price. They have to make several visits to the bank and block office to find out why their payments failed to arrive, find out the error and then get it corrected. Copies of various documents have to be submitted. The rectification process is long, arduous and takes many months. The onus is on the worker alone.

Maximum number of people whose payments were rejected were from Jharkhand (249) and Rajasthan (138).  Andhra reported very few such cases.

“According to official figures, as of July 2020, in the last five years, about Rs. 4,800 crore worth of payments were rejected and about Rs. 1,274 crore worth are still pending to be paid to workers,” says the report.

The CSP/BCs don’t have passbook updating facility. In Rajasthan and Jharkhand 80 percent of workers weren’t given a receipt for withdrawal at the CSP/BC. Workers were sometimes charged for transacting when the service is meant to be free. In Jharkhand 45 percent of users were charged for withdrawing wages. In contrast, post offices in Andhra updated passbooks after every transaction. Banks too were very tardy in updating passbooks. In Rajasthan seven out of 10 people said their passbooks never get updated in banks. Bank officials refuse to do so.

Workers don’t know whom to complain to when they face problems about wages. Around 546 respondents did complain. But 95 per cent did this verbally. Six complained in writing and only one filed the complaint online. Most complaints were about pending wages and partial wages received.

Unless NGOs or voluntary organisations step in to help, workers find it difficult to complain online.

LibTech’s survey also found that knowledge about banking norms and customers’ rights was very low. About 75 percent of respondents didn’t know they could transact in any bank branch. They were also misinformed about wage credit and made multiple trips just to find out if their wages had come. But better knowledge didn’t mean less hardship for workers.

LibTech’s report has a number of recommendations.

First, design and roll out public delivery systems with the participation of workers and by understanding the issues they face. For instance, all information from demand for MGNREGA work to payment of wages, should be available in each panchayat in formats decided by workers.

Third, passbooks must be updated and receipts issued. Such facilities should be available to every disbursement agency including BCs and CPCs. Also, wage slips with  details of work done and wages to be paid, should be given to every worker at the work site by the Gram Rozak Sevak.

Fourth, more rural banks are needed. To reduce time and cost per transaction, panchayats can be linked to banks/post offices or other disbursement agencies. Also CSPs should provide information of all government schemes, register grievances and help complainants in tracking them.

Fifth, every disbursement agency including UIDAI, NPCI, PFMS, Banks, and CSPs/BCs must be brought under the ambit of a social audit to ensure transparency and accountability. To truly implement MGNREGA in letter and spirit, there is an urgent need to double the administrative budget and ensure more field functionaries in every panchayat.

The reason workers face so many hassles in getting their rightful wages is that the government has been constantly changing the way it pays them.

First, they were paid cash, then payments were made through the post office, then through banks and Direct Benefit Transfer,  and then along came the Aadhaar Payment Bridge System.  The banks weren’t geared to tackle this line-up of tech changes and many workers ended up with multiple bank accounts.

It is morally and legally unacceptable that any worker should be denied full payment for work he or she has carried out as per terms and conditions. MGNREGA work is not charity work.

Improving the MGNREGA payment system can help other government schemes like PM Kisan, Maternity Entitlements, Scholarships etc function much better and ensure rich dividends to the ruling powers as well.