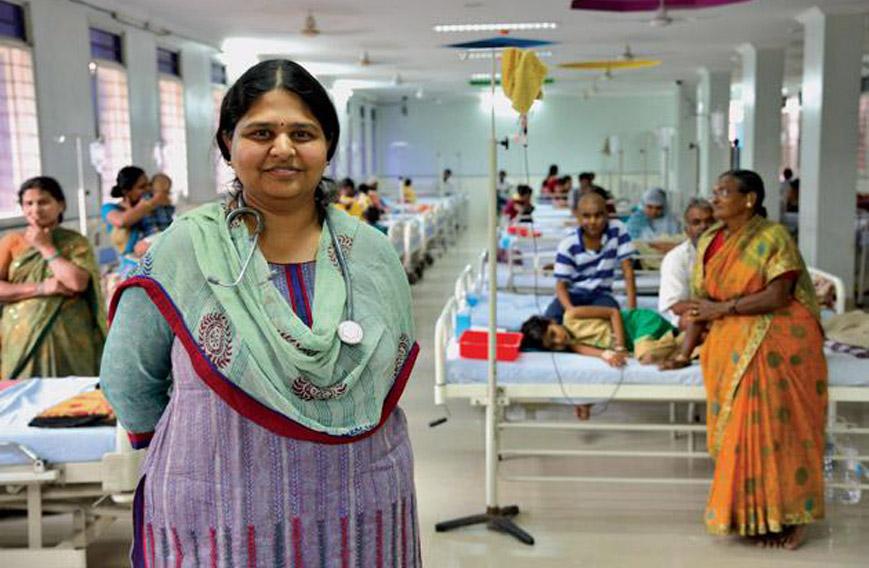 The MNJ Cancer Hospital at Red Hills in Hyderabad has a good reputation as a government facility. But till six years ago it had no clue as to what to do with the number of children brought to it for admission. The hospital was only for adult patients and the children would be sent to the Niloufer Children’s Hospital next door though it didn’t have the specialists or infrastructure to treat cancer cases.

Things changed in 2008 when Dr Sudha Sinha joined here. A medical oncologist, she had spent several years in the US. Back in Hyderabad in 2005 she had first worked in a private hospital and then in 2006 opted for government service to have a bigger impact.

Dr Sinha wasn’t a specialist in children’s cancers, but since there wasn’t such a specialist at MNJ Hospital, she would attend to the children in addition to her adult patients. The problem was that the children could not be admitted and she had no means of knowing how they were responding to the treatment. They would go to the Niloufer Children’s Hospital and that was the last she would know of them.

A time came when she had to take care of 13 children and she wondered how to treat them over a long period. Dr Sinha had to act. She pitched with the director of MNJ Hospital for a ward with 13 beds. In a fortuitous turn of events, the ward became a reality. Today it has grown to 40 beds, and is perhaps the only one of its kind in the country. It is indeed a great example of how public health infrastructure can be expanded.

“In oncology in the developed world cancer in children is a major success story,” says Dr Sinha. “The latest data we have is that in blood cancer 90 per cent get cured. With other cancers if they come early or even in the fourth stage, the cure rates are between 50 and 60 per cent. For blood cancer almost everybody is being cured abroad,” explains Dr Sinha.

In India it is just the opposite. Children die for want of specialised hospitals. Diagnosis is late and follow-up poor. In private hospitals the cost of treatment is forbidding and beyond the reach of the majority. It is a sorry state of affairs.

Cancer treatment involves extended engagement with the disease to beat it at its own game of variations. In developing countries like India the problem is   abandonment of treatment half way. Patients give up and vanish either because they can’t afford the cost of treatment or because facilities and specialists are lacking.

It is possible to change things around if doctors and administrators have the vision and put in the effort. At MNJ Hospital, the children’s ward is a success story. A transformation everyone thought impossible has been achieved.

The children’s ward we see today is a combination of the essentials of public healthcare: expertise, efficiency and basic infrastructure.

The floors are clean and the ceiling has bright paint. Well-trained nurses are purposefully busy. Orange case files lie on a table. A teenage boy with a sparkle in his eyes, wearing a cap to cover his hairless head, sifts through the files, perhaps looking for his medical record.

There is an easy-paced professionalism in evidence here. Systems are in place. Treating cancers is complex and medical teams need to go beyond competence to be inventive and adaptable in taking on  the challenges that a deadly disease like cancer throws at them.

There is space in the ward, not too much, but enough to ensure dignity. Anxious parents are at ease comforting their children. A young mother strolls through the ward with her toddler holding onto her finger. There are no frills, but the dehumanising congestion of a government hospital is not there.

Patients outnumbering the number of beds come asking for treatment and need to be admitted. It is a challenge for which solutions will have to be found. For now the rush of patients exists, but it is not so open.

“After I joined MNJ Hospital, for the first three months I was one of  two medical oncologists. After that I was the only medical oncologist. The institute, in fact, did not admit children and was meant only for adults. There was no children’s specialist. Two or three children somehow got admitted and there were others who would come to me for treatment,” recalls Dr Sinha.

“I would write the treatment schedules and send them to the nearby children’s hospital. If the child survived the parents came back, but I had no denominator to work with. If the child died I would not know about it. If they stopped the treatment I would not know about it. I would give  treatment A, B and C and they would go to the children’s hospital and whatever happened to them happened. It was not very satisfying.”

The Niloufer Children’s Hospital has 800 beds. Dr Sinha began to go in search of the children she had sent there and ask the families to bring them back for treatment.

“We held a series of meetings with the parents and decided that MNJ should do something here in our hospital,” says Dr Sinha.

“The director said to me that it was a good idea but I would have to find the space — ‘You know how expensive real estate is in this city!’ he said to me. I then spoke to the heads of department of surgery and radiation and they said it was a brilliant idea and that we should do it. The head of radiation gave me his space and, there and then, I had a ward for 13 children,” Dr Sinha remembers.

The ward became a reality but it needed beds, equipment, medicines, nurses and doctors. MNJ Hospital being a government establishment, it meant dealing with procedures and pursuing permissions across departments.

NGO IS SET UP

To make matters simpler and faster, Dr Sinha set up IMPACT, an NGO in 2008 with her sister and friends as trustees. IMPACT is the acronym for Improving Access to Care and Treatment. Through IMPACT money was raised for hiring nurses, buying medicines and equipping the ward. The NGO donated the funds to MNJ Hospital, which took the expenses on its books.

For instance, six nurses had to be hired and specially trained for the children’s ward. Sanction of funds from the government would have taken very long. Instead, IMPACT provided the funds for the salaries of the nurses and other support staff who were paid and trained by MNJ Hospital. Over time, the number of nurses and support staff increased and the arrangement continued till very recently when funds from the government were finally approved.

Similarly, additions to the 13 beds of the ward came from a sponsor so that now there are 40 beds and further additions are likely to be made in the same way.

IMPACT’s mission is to build a “sustainable and replicable model”. It seeks to bridge the shortcomings in public health infrastructure by “creating a comprehensive ecosystem of partnerships to provide specialised care including accommodation, food, transport, blood products and lab services”. It has what it calls CARE values: Commitment, Accountability, Respect and Efficiency.

When Dr Sinha returned to Hyderabad after several years in the US, she was a qualified medical oncologist with valuable experience. It was a family decision that brought her and her husband and two boys back. They wanted to live in India and Hyderabad after all was home.

Finding employment was easy. She was soon working in a private hospital and life may well have continued at that comfortable pace had it not been for one of her patient’s in that hospital, a teenage boy, whose family couldn’t afford his treatment beyond a point.

“Somehow I felt responsible for his entire treatment. I could not bring myself to say, ‘ You have no money, now go wherever you have to’,” says Dr Sinha.

So she reached out to friends and wrote to the Telugu Association in the US and raised around Rs 4 lakh for the boy’s extended treatment. It wasn’t so easy to bring in donations. It was also stressful for the boy’s family.

“I could not see the boy die just because the family didn’t have money to pay for his medicines. I also persuaded the wealthy grandparents of another child being treated by me to contribute to the cost of the medicines,” recalls Dr Sinha.

It was a case that made Dr Sinha think. If this was the plight of just one child and his family, then what might have happened to the tens and thousands of others who couldn’t even make it to a private hospital? Where did they go? What did they do?

“It made me wonder, if for just one child I had to raise such money where was the solution? I thought I should try harder to join a government set-up and have a bigger impact,” says Dr Sinha.

“We have to make our government system deliver so that everyone has access to quality healthcare.”

After she joined MNJ Hospital, Dr Sinha reached out to bring in as much support as she could for her mission. Apart from better systems, funds and strategic support, she herself needed to upgrade her knowledge of treating child cancer patients.

She connected with St Jude Children’s Research Hospital in Memphis, Tennessee. It is one of the foremost centres for treating children with cancer. Its mainstay is donor-driven treatment and it is known for not turning patients away who can’t afford. Also, a very small percentage of its cases are paid for through insurance.

There was a natural fit between what Dr Sinha was setting out to achieve and St Jude. Soon Dr Raul C. Ribeiro of the department of oncology research there agreed to visit Hyderabad.

“He came and said he was very happy with what he could see. I asked him what there was to be happy about. He said since the situation was so bad, it could only get better from here,” recalls Dr Sinha.

Over time, St Jude has been an important partner for improving systems, training and understanding the challenges of treating childhood cancers, not least among them being abandonment of treatment. St Jude is rich in experience because it also works in other developing countries to bridge gaps in the public healthcare system. It is the best advice that MNJ Hospital could get.

By any measure the children’s ward at MNJ Hospital is a success. There are innumerable case studies to establish this. The ward aspires to have the best systems and protocols. The nurses are specially trained and empowered. Provision has been made for palliative care and counselling which are both essential cancer treatment.

Dr Sudha Sinha has shown what doctors can achieve when they go from the private sector to a government set-up and bring to it a certain degree of excellence that everyone can benefit from.