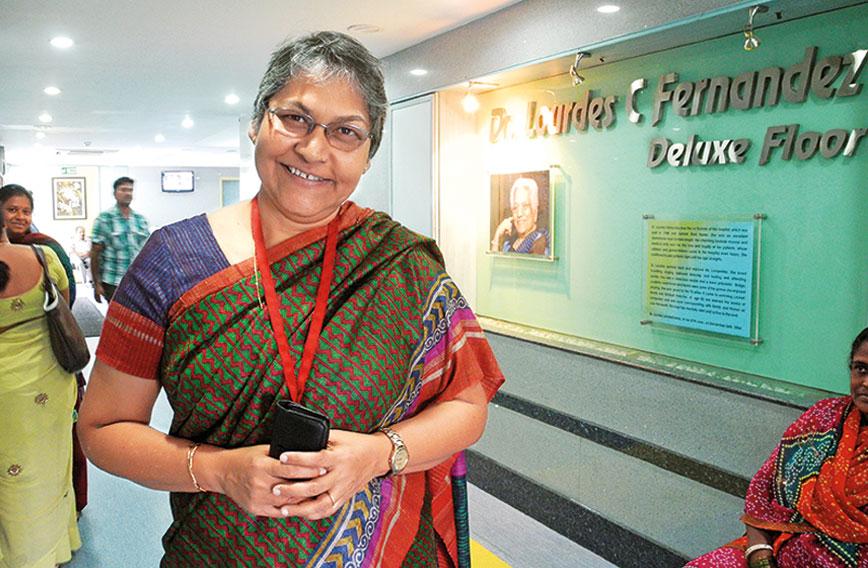 Dr Evita Fernandez: 'We expect nurses to perform but when we pay them so poorly how do you build up self-esteem and dignity?'

‘Nurses should be trained better and get more respect’

NURSES are as important as doctors in delivering healthcare, but look around in India and it may not exactly seem so. From the training of nurses to the roles they should be playing, much remains to be done. The failure to empower them finally weakens the health system as a whole.

The solutions, though they seem obvious, aren’t easy to implement. What can be done and where should a beginning be made? To find out, we spoke to Dr Evita Fernandez in Hyderabad.

At Fernandez Hospital, which she inherited from her public-spirited parents who were both doctors, she has invested in imparting better skills to nurses and encouraging them to play decision-making roles. She has also been involved with the training of nurses and midwives for the government.

She says perhaps the most important change that is needed is in the attitude of doctors who should yield more space to nurses and treat their contributions with greater respect.

Excerpts from an interview with Dr Fernandez:

The standard of training given to nurses is because of a large number of private nursing colleges. There are some excellent private colleges, but I suspect the majority do not meet standards in terms of quality of teaching and clinical training. So, the quality of the nurses coming out of them is not standardized and a lot of the time is deplorable. There is also a problem with our attitude to nurses. You know, doctors tend to treat them as gophers — go do this or that — and don’t give them the respect they should get as colleagues capable of doing much more. As a result, today we have a large group of nurses who should be playing a vital role, but have not been given that opportunity to do their best.

So, it is bad training and lack of empowerment.

Yes, absolutely. And the change has to begin with us doctors changing our attitude to nurses.

It’s a question of having correct expectations from nurses.

Nurses are a huge network. And there are those who have over the years gained tremendous clinical experience. Sadly, many have not had the opportunity to update themselves on recent practices. But they have the capacity to change if a hospital is driven by protocols. I think the important thing is the quality of training. We just have to up that.

Would you say the numbers we have are adequate for a country as large and diverse as ours?

No, no, I don’t think we’ll ever have the number we need. And the other important thing that we must remember is they are paid very poorly. We expect them to perform, but when we pay them so poorly how do you build up self-esteem and dignity?

We learnt this in Fernandez Hospital when we began in-service training, which we offered free. We said, just be consistent. And, our first in-service training was a two-year course, and we asked everybody, if I remember this was in 2005, to put down a deposit of `1,000. We ran them through the course, had an exam and they passed. The `1,000 was given back to them. They had an increase in their salary, having passed the course. But what we saw was amazing. Their self-esteem improved. They felt respected, they felt cared for. They could not believe we doctors gave up a Sunday morning consistently to train them. Since then, we’ve believed in investing in nurses, training them, pushing them and encouraging them.

Do these courses still happen at Fernandez Hospital?

Yes, all the time. The neonatal course is now online. And we’ve also chosen three of our nurses to sub-specialize and serve as leaders in the three different units. We also bring them in to teach. With the midwives we’ve pushed them to taking online certified courses to update their knowledge, encouraged them to become trainers in “hands-on” workshops and “clinical mentors” with the midwifery training of nurses for Telangana. Our vision is to develop leadership and have nurses/midwives involved in policy decisions both in the organizations they work for and at national level.

How many nurses do you have at your three hospitals?

At the moment, I think we’re probably around 500 (present total = 502). But we need much more. We need around 180 in each of our hospitals. So we do have quite a deficiency.

And is that because you can’t get the people you want?

Two reasons: we are a single-specialty. After a year or two, those who come to us tend to want to go to a multi-specialty so that they get wider experience and then go abroad. Their idea is to go abroad. You can’t blame them because what they’re paid outside is perhaps five times what they get here.

How much do you pay?

I believe the government gives probably twice what we pay. With us the girls get free housing, free food and a starting salary of around `15,000 a month. This is as someone who’s just finished their three years in nursing school and come to us. Keep in mind that we spend almost six months getting them to unlearn and relearn the ropes.

A midwife would start at `25,000 a month. We have got midwives who are earning `90,000 and `65,000. We definitely feel the nurses, whether they sub-specialize as neonatal nurses or midwives, need to be encouraged and given a career path. We’ve told them the opportunities with us are to become director of midwifery and superintendent of nursing. We invest in them.

Give them a career goal within your hospitals…

Yes, but this is in our own tiny world. This needs to be offered across the board. The Indian Nursing Council should do it.

Does the bulk of training that happens take place in the money-making colleges or are there also enough dependable institutions as well?

Nursing colleges benefit from being attached to large medical colleges or large hospitals where training is good. Let’s take our own example, the Fernandez School of Nursing. We excel in OB-GYN and neonatal. For the rest of our subjects, we have to send the students to a government hospital and the girls would see the difference. They could spend a whole month in our government hospital with absolutely no teaching. And on our part we were very much aware that we are producing nurses with good skills in certain areas, but hopeless in other areas. So if we’ve felt this way, I can imagine the rest of the nursing schools which are in a situation like ours.

But what about well-recognized institutions?

Absolutely. I mean, Osmania used to have a good reputation. I think you’ve got some excellent places in Delhi. I think the leading institutes are CMC Vellore and St John’s Medical College in Bengaluru. There is RMC in Chennai. You’ve got CMC in Ludhiana. You’ve got Holy Family in Delhi. St Martha’s  Hospital in Bengaluru. AIIMS in Delhi, I am told, has excellent teaching and training. I know that the neonatal department is doing some amazing work with their nurses. You have got Dr Ashok Deorari at AIIMS who is tremendous and  invests in nurses all the time.

Does a nursing course begin after Class 12?

It has been a three-year diploma after Class 12, but this is being phased out all over the world in favour of a B.Sc. in nursing. The Indian Nursing Council is going in this direction. So that’s why we in 2018 shut down our diploma courses in anticipation of this, and we only run two post-basic diploma courses and that’s in  neonatology and midwifery.

Currently, nursing schools give a diploma in nursing and midwifery though I can’t understand why midwifery was added to it because the nurse in training is exposed to just 12 to 16 weeks in maternity services.

How do rural hospitals manage?

In smaller hospitals and rural areas, the doctors usually employ young ladies and train them. They may not be certified or qualified nurses, or they could take a nurse with a qualification that was ANM or Auxiliary Nurse Midwife and is at present called MPHW or Multi-Purpose Health Worker. These, once again, are ladies who would have finished Class 12, but did an 18-month course. And so that certifies them as having certain nursing skills, but they’re not allowed to prescribe, they’re not allowed to do some things that a nurse could do. Now, a lot of us, years ago, ran our hospitals with all these ANMs. In Fernandez, we had a collection of ANMs and general nurses when we ran our in-house training programme in 2005. And the ANMs were flying high, because they were so delighted that they were given a chance. And our neonatal nurses, all ANMs, were able to intubate newborns, interpret lab tests and perform basic procedures. In fact, some of our postgraduate neonatologists learnt from these ANMs. So that was another revelation for us. If you give someone absolutely focused good quality training, she becomes top-notch.

We learnt this in South Africa, where at a 60-bed unit the neonatologist simply didn’t have the doctors and the nurses so he created an in-house programme.

But today, the NABH (National Accreditation Board for Hospitals & Healthcare Providers) doesn’t allow you to have ANMs in strategic places because it is not a quality indicator. So while we have nurses, there are certain clinical areas where the ANMs have proven to be dependable and competent.

Why don’t you send them off to be trained or to take a nursing diploma now?

Well, some of them are much older and they can’t be bothered going through a three-year course. And the other thing is, if you ask them to do a course where they can’t attend classes. You know, this is why we want the Indian Nursing Council to offer online courses for such nurses. They have the potential. But how do you expect them to just stop working, go and spend three years upgrading skills and come back? Who will provide for the family? More so, if she is a single mom and the only bread-winner.

I can give two very good examples. Pavitra Mohan and Sharad Iyengar in Rajasthan have invested in nurses coming from the villages where they are running their health centres. It has worked to an extent. With the midwifery, what we’re trying to do in Telangana is to have midwives posted closer to where they live. Women are not unhappy about shifting. So, that has worked very well. We are now training 140 nurses and have told them where they will be posted so they know and they start planning. I think that’s important.