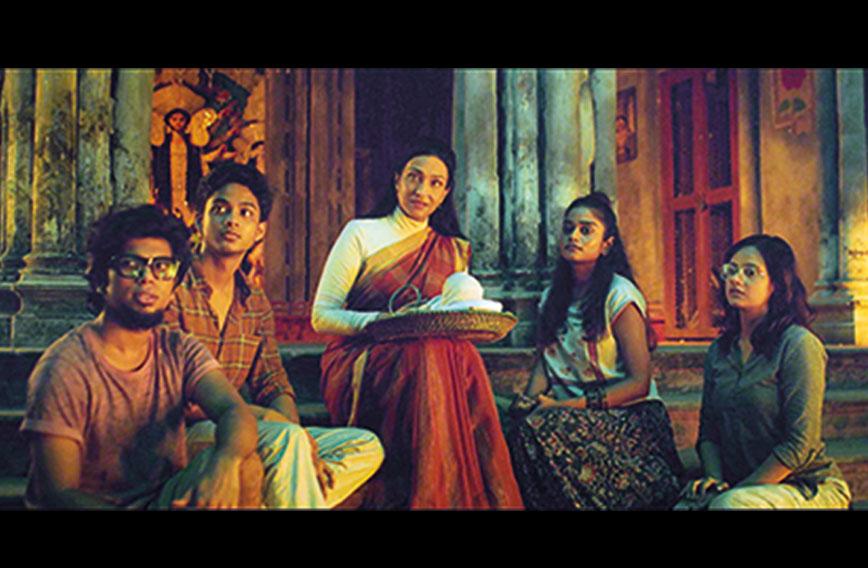 Mahishasur Marddini’s characters walk into and out of the stage, play their parts, speak their lines before disappearing into the ‘wings’

Mahishasur Marddini is a film with the feel of theatre

NOTHING that a feature-length fiction film postulates on the hurdles that women face in India can be deemed an eye-opener. The reality is infinitely more skewed than what a big-screen dramatization of it can ever capture.

A new Bengali film, Ranjan Ghosh’s Mahishasur Marddini (A Night to Remember), pieces together stories of gender discrimination and sexual violence to attempt the onerous task of revealing the sheer gravity of the situation on the ground. It succeeds to a great extent.

Mahishasur Marddini has an unusual feel and texture. It combines the grammar of cinema, the methods of proscenium theatre and the interpretative tools of socio-political observation to throw light on what ails a society that worships the Mother Goddess but denies women equality and dignity.

The film’s title, an appellation for Goddess Durga, literally translates as slayer of Mahishasura, a demon king of Hindu mythology. It draws from real incidents and talking points to craft a layered portrait rendered in the manner of a multi-act theatre production. The characters walk into and out of the stage, play their parts and speak their lines before disappearing into the ‘wings’ and, in the end, contribute to the overall statement that the ‘play’ seeks to make.

Mahishasur Marddini, which unpacks a single-night, single-location bundle of tales, plays out in an old Bengal mansion where last-minute preparations are underway for Durga Puja. The idol of the goddess, made by a Muslim artisan, stands witness to the goings-on on the screen, as it awaits ritual invocation for the five-day annual religious festival that recently earned an ‘intangible cultural heritage’ tag from UNESCO.

On the eve of the first day of the festivities, the landlady (Rituparna Sengupta, in her third collaboration with Ghosh) and four young tenants, all final-year students, spend the night receiving a stream of visitors — an Army major (Shaheb Bhattacherjee) and his wife (Poulomi Das), an elderly member of an NGO that performs the last rites of unclaimed bodies (Pawan Kanodia), a cynical ruling party politician (Saswata Chatterjee) and an election strategist (Parambrata Chattopadhyay).

They find a female infant abandoned in a garbage bin behind the house. Over the next few hours, they have to collectively confront and process several more unpleasant turns of events that expose tensions simmering under the surface.

None of the characters has a name. Their identities stem from the work they do and the ideas they propound, from the philosophical to the practical, from the political to the polemical. Each male character represents a facet of masculinity that explains why we are the kind of people we are, besides providing the filmmaker a prism through which he can view the ingrained prejudices and inherent ills that beset us as a people.

Parts of the film may seem a tad facile given the fact that the truths being articulated are far too familiar to bear repetition but, seen as the sum of its parts, Mahishasur Marddini delivers a strong, incisive and significant commentary not only on the status of women at home and in the world, but also on the state of contemporary India as a whole.

On one level, the film alludes to the mythological epics — the abduction of Sita, the humiliation of Draupadi, the cutting off of Surpanakha’s nose — to underline a tradition of misogyny. On another, the plot incorporates little acts of omission and commission to emphasize the class divides that define our society and nation in the present day.

In his director’s note, writer-director Ghosh, who a decade and a bit ago assisted Aparna Sen during the making of Iti Mrinalini (2011) besides co-writing the film, says: “Mahishasur Marddini avoids a mechanical plot. The dramatic moments here do not emerge from the cause-and-effect structure of usual plot-driven stories.”

“This film,” he says, “is my humble tribute to the rich Indian theatre tradition and the Indian aesthetic of cinema. I have explored and experimented with the formal elements of both. The entries and exits of the characters, their performances, dialogues and activities, the staging and blocking, the use of props, the lighting and shot-taking are all arranged to further the combination of two forms of story-telling.”

Ghosh’s debut film, Hrid Majharey (2014), reimagined a Shakespearean play in a modern context to mark the Bard’s 450th birth anniversary. He has since made two other films — Rong Beronger Korhi (Colours of Money, 2018), an anthology of four short stories, and Aaha Re (2019), an inter-faith love story involving a professional chef from Dhaka and a middle-class Kolkata woman who runs a home-cooked food delivery service.

Mahishasur Marddini, the director’s fourth film, was shot after the second wave of the COVID-19 pandemic and the post-production was wrapped up around the time that the Omicron variant of the virus surged across India.

The ‘present’ scenario in the film — it spans a few hours stretching from evening to dawn, with a dark, diseased, disquieting night in between — unfolds in the courtyard of the vast mansion. The past — seen from multiple points of view — is staged in spaces inside the same edifice. The flashbacks serve the purpose of revealing the inner demons that haunt the protagonists, be they female or male, none of whom is blameless.

Mahishasur Marddini, incidentally, premiered on International Women’s Day at the 13th Bengaluru International Film Festival (March 3-10, 2022). The film is peopled by a spectrum of women — on one end is an Indian Air Force test pilot readying for a space mission, on the other is a destitute girl who has been gangraped and burnt alive near a graveyard, sparking communal rioting in the area.

The film is, however, not only about women grappling with gender discrimination and social obstacles. It probes the thinking of violent, myopic, self-seeking men who stand in their way or seek to engage with them in ways that betray brazen toxicity.

Says Ghosh: “The film is about guilt-ridden memories, fake appearances and the eventual crumbling of these appearances.” Indeed, Mahishasur Marddini does not merely present a one-dimensional narrative about wronged women — yes, a few of the women we see or hear of on the screen are grievously wronged — but also delves into lapses of judgement that seemingly sensitive but privileged individuals make when it comes to dealing with people lower in the pecking order.

“Both feminist and political, Mahishasur Marddini is my attempt to create a bleak and haunting world that evokes our shame and leaves us bruised,” says Ghosh. The synopsis calls the film “a letter of apology” to women for the wrongs they have endured through the ages, and continue to do so to this day.

That creative choice gives the writer-director the scope to articulate his concerns in a manner that is both comprehensive and pointed, especially when the film is at its best. Mahishasur Marddini is at its most trenchant when it calls out, if only in passing, majoritarian narratives and the culture of hate and division that gnaws at the vitals of the nation.

One of the men asserts that the only true borders lie between day and night, life and death, hope and despair and that man-made borders count for little. Unfortunately, as it transpires not long after this utterance, these ‘insignificant’ borders do the most serious damage to humanity.

The politician — he is the minority face of the ruling party — gets the rough end of the stick from both the woman who is days away from leaving for Russia to train as a cosmonaut and her pugnacious young paying guests. Many a wrongdoing is laid at his door, but this man isn’t projected as the fount of all problems.

What is more, he gets his own back occasionally — he takes jabs at popular notions that have gained currency owing to their unquestioning perpetuation. He asserts how the privileged class that has traditionally wielded power in this land conveniently labels dissidents as outlaws and goes after them. Sometimes it is an intransigent tribal king (isn’t Mahishasura one?) and sometimes a student leader from a summarily othered community, he says.

Mahishasur Marddini is an important film because it stares at the rot in the soul of India in the face while crafting a hard-hitting and urgent cautionary tale about a night without end.