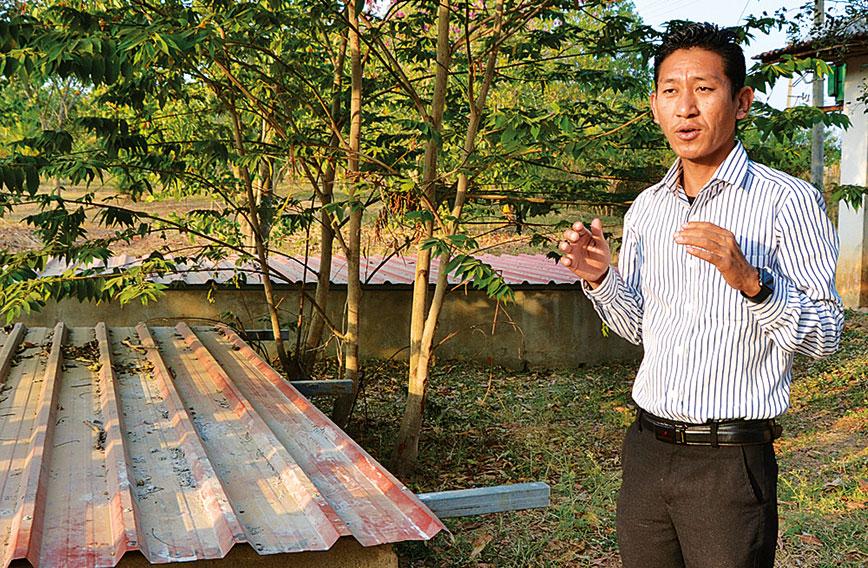 The Doeguling Tibetan Refugee Settlement is around 50 km from Hubli in the Mundgod panchayat in the Uttara Kannada district of Karnataka. It is the largest Tibetan refugee settlement in the world inhabited by 17,000 Tibetans and  has a cluster of seven monasteries, a Tibetan Medical and Astro Institute, 20 schools, two homes for the elderly and a cooperative society.

North Karnataka is a challenging place to stay for the Tibetans with its hot and arid climate and a scarcity of water.

Reimagining Doeguling Tibetan Settlement Project (RDTS), aims to make Doeguling a thriving sustainable community by empowering Tibetans. It also seeks to convert Doeguling into a tourist destination by promoting it as a centre of Buddhist learning and traditions.

To tackle the water crisis, Reimagining Doeguling and the Geluk International Foundation, which preserves Buddhist heritage, successfully implemented a rainwater harvesting project in their settlement which recharged their bore wells.

Then they decided to reach out to parched villages nearby and help them recharge their bore wells using the technique they developed.

Tenzin Thakpo, who chairs the water committee of the RDTS, says they surveyed 12 villages and six hamlets. “We focused on how many bore wells there are in neighbouring villages and how many are yielding water. We found that Koppa village was the worst affected,” says Thakpo. The Mundgod taluka receives 900 mm of rainfall in four months during the monsoon but rainfall is declining every year,
he explained.

Koppa has 300 households, where bore wells had run dry due to severe depletion of groundwater levels. Every summer villagers have depended on water tankers. Thakpo got full support from the panchayat and villagers. Their method involved harvesting rainwater to recharge bore wells.

First, pits sized 10x10x10 feet were dug around the bore well casing pipe. Tiny slits are made into the casing pipe which is then wrapped with nylon-mesh.

Reinforced cement concrete rings of 4.5 feet in diameter and one foot in height, are laid one upon another around the pipe thus creating a circular structure in the centre of the pit. The rest of the pit is packed with natural filtration material like stones and sand.

Adjoining this pit, referred to as the primary percolation pit, a large pond is excavated. During the rains, rainwater from the plot is directed to this catchment pond via a series of trenches or piping. The water then enters the primary percolation pit and after undergoing filtration through the stones and the sand it seeps in through the gaps between the cement rings. After a final round of filtration by the mesh, the water enters the casing pipes through tiny slits thus going back underground to replenish the water table and aquifers.

The total cost of the project in Koppa worked out to Rs 184,130. Dr Anita Dudhane, a medical practitioner, helped along with friends,  to financially support the project. The water harvesting unit has been constructed outside the village school which provides education to around 200 students.

The unit was formally inaugurated in January with the villagers and members of the Tibetan community collectively performing rituals.

Thakpo said the unit will save five million litres of water in 1,000 square feet of catchment area during the monsoon. “The number of dry bore wells are  increasing every year due to the lack of a proper monsoon combined with the failure to conserve rainwater. The goal of the project is to conserve rainwater and meet the demand for water,” says Thakpo.

“We are hopeful that this project will solve our water problems,” said Basuraj Devikoppa, a panchayat member. Villagers were very happy that the Tibetan community had taken note of their problem and come to their assistance.

The RTDS has identified Nandikatta village and another three settlements for their next project. “Around 3,000 people will benefit,” said Thakpo, who left his corporate job in Bengaluru to work for the community.

“According to a report by the NITI Aayog, Karnataka is the second state after Rajasthan where water levels are depleting at an alarming scale. North Karnataka is the worst affected. More awareness needs to be created at the grassroots on rainwater harvesting,” said Thakpo. Apart from ameliorating water shortages being faced by villagers, the project has fostered fraternity between the two communities, remarked Dr Dudhane.