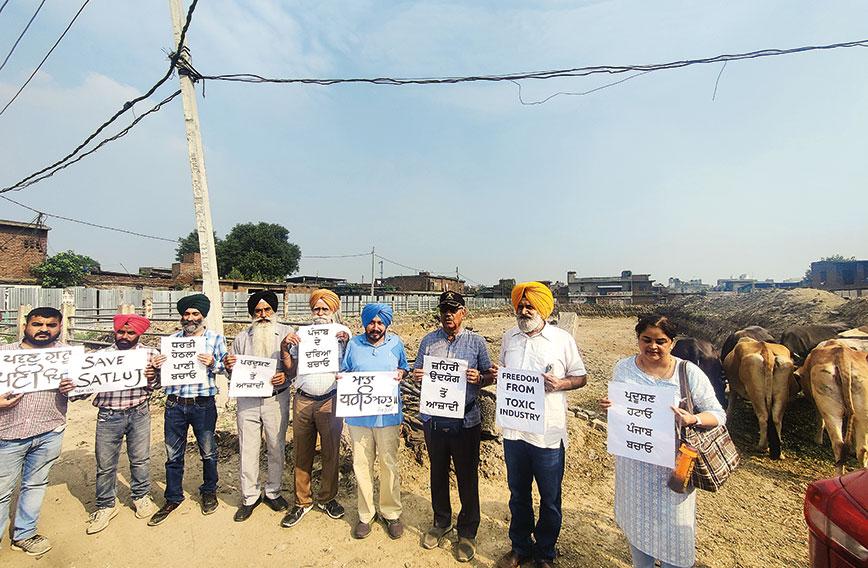 Battling it out: Residents of Ludhiana turn up at a dairy to protest eyewash pollution control measures

In Punjab more speak up on pollution and are heard

IT was a Sunday, August 14, a day before Independence Day, with all the enticing possibilities of a really long weekend. But 10 residents of Ludhiana were instead holding a freedom-from-pollution protest at a complex of dairies which have been dumping cow dung and other wastes into the Buddha Dariya which runs through the heart of their city, Punjab’s leading commercial centre.

The Buddha Dariya has for long been just an eyesore and embarrassment for Ludhiana. The city’s own water supply is not directly affected, but the chemicals and organic wastes dumped into the Buddha Dariya are a major hazard for people downstream where it joins the Sutlej. There are effluents from industrial units and 300 dairies, and of course sewage from homes, that go into the Buddha Dariya from Ludhiana.

Thanks to the ongoing efforts of  public-spirited residents, a plan for cleaning up the Buddha Dariya was approved by the outgoing Congress government. During the recently held state assembly elections and after the Aam Aadmi came to power, the residents ensured there was a fresh political buy-in for the plan.

They have come together under what they call the PAC or the Public Action Committee for Sutlej, Buddha Dariya and Mattewara. It gives them a presence in their interactions with the government.

Their first success was at Mattewara where they managed to get the government to cancel the plan for a textile park by clearing forests and instead agree to the setting up of a biodiversity park. Getting industry to back off in favour of saving forests is  a major achievement that has been possible only because the hallmark of the PAC’s syle of functioning is its low-key persistence.

But now much work needs to be done on implementing the government’s `840-crore plan for cleaning up the Buddha Dariya. Transparency and oversight are required so that the money is properly spent. There is also a mistaken notion that the setting up of effluent treatment plants (ETPs) will be a silver bullet solution.

The members of the PAC have been pointing out that the problem is more complex. Industrial units should be put together in clusters so that their treatment requirements can be met efficiently. For the dairies, the opposite action is called for because ETPs can’t process their wastes. They should be dispersed so that cow dung and other organic wastes can be used in agriculture where they are located.

But the businesses, being well entrenched and networked, are tough nuts to crack. No one wants to move. The dairies, in fact, see the ETPs as the fig leaf of pollution control behind which they can hide. Two dairy complexes have gone ahead and started constructing ETPs of their own.

The problem can’t be left to local officials to resolve and some difficult decisions need to be taken in Chandigarh. The residents have managed to get a Punjab Vidhan Sabha Committee appointed on the Buddha Dariya and the Ghaggar river.

But it is going to be an easy fight. The PAC wants the 300 dairies dispersed in such a way that there are no more than two at each location. In this way the wastes they produce will readily be used in agriculture on nearby farms.

In fact, it is only in Ludhiana that so many dairies exist in close proximity to each other. Elsewhere in Punjab there are 10,000 dairies which cause no problem at all because they are scattered and integrated with the rural economy and, crucially, their wastes can be recycled locally, the PAC points out.

Jaskirat Singh, who is an electronic engineer and one of the early movers in getting Ludhiana’s residents together, says: “The very idea of ETPs for dairy waste is technically unsound. It threatens to derail the entire `840-crore Buddha Dariya rejuvenation project. The dairies should be scattered in surrounding villages.”

In a letter to the head of the Vidhan Sabha committee, Singh says: “All experts agree that the Biochemical Oxygen Demand (BOD) and Chemical Oxygen Demand (COD) of dairy waste is too high to be treated in such ETPs successfully. It is our understanding the dairies must be moved out of Ludhiana city and the banks of Buddha Dariya.”

“Entire Punjab is waiting to see the rejuvenation of the Buddha Dariya and Sutlej. Moving the dairies out will be the most helpful step to ensure the success of this plan,” he says.

Col J.S. Gill, member of the Buddha Dariya Task Force, says: “Dairy waste can’t be treated in ETPs. The idea has been opposed by people who know what they are talking about including a former IAS officer and chairman of the Pollution Control Board. The government should consult independent experts and scientists and not waste time and money on ideas that are not going to work. Such decisions can’t be taken by non-technical bureaucrats.”

The situation is complicated. The dyeing and electroplating industries in Ludhiana would like the dairies to continue where they are so that the pollution that they cause covers up for the industrial units’ excesses, explains Kapil Arora, a PAC member.

Punjab is a minefield of environmental problems acquired over long years. Politicians have generally been unmindful of the consequences. No party has had a meaningful green agenda. Ordinary citizens have felt daunted by the magnitude of their problems and the forces that they have to confront.

But as the problems have grown, so has the inevitability of citizens having to act in their own interests. There is very often no option left. There is also hope in the Aam Aadmi Party coming to power and promising to be activist in its orientation towards basic issues like clean air, water, health and education. The Vidhan Sabha committee on the Buddha Dariya and the decision to protect the Mattewara forest are examples of what changes in governance can achieve.

Including Mattewara and the Buddha Dariya, there are several recent citizens’ initiatives that have made their presence felt.

The Zira Sanjha Morcha has in recent weeks held massive public protests against the Malbros Distillery near Zira in district Firozpur to stop them from discharging effluents into aquifers through borewells. The distillery is closed because of the protests.

At Chamkaur Sahib, an agitation is stopping a paper mill from coming up because they too fear their groundwater will be affected. Water remains a major concern in Punjab. Like the Zira protesters, here too people don’t want their groundwater depleted or contaminated.

There is also coordination among activists and an eagerness to learn from the experience of one another. The Mattewara protest is held up as a success story that other groups want to emulate.

When activist Parvinder Singh Kittna took on stone crushers in the forests on the border of Punjab and Himachal, they tried to get him arrested. Many environmental activists from Punjab got together to support him and went along with him to the Una civil courts for his anticipatory bail application.