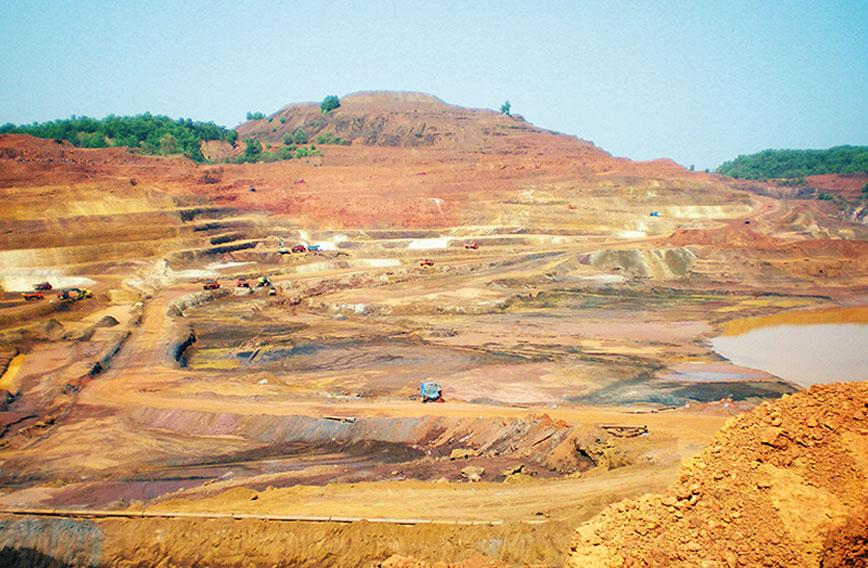 A panoramic view of a mining site in Goa

The Supreme Court’s order on 8 February cancelling all iron ore mining leases in Goa issued by the state has caused a tizzy. The mining industry called it ‘catastrophic’. There was much dismay in the interior talukas which are dependent on the industry for employment.

The state government was taken by surprise and opinion was split between two groups — one favouring adherence to the court order and the other calling for an ordinance to overturn it.

The Goa Foundation, petitioner in the case, was happy with the order. But it isn’t opposed to mining. It would like the state government to take over the mines and run them and for the people of the state to benefit from the money that’s made.

“Mineral wealth belongs to the people and the government is just a custodian, hence wealth earned by selling the mineral should go back to the people,” says Rahul Basu, member of the Goa Foundation.

The mining industry’s countdown started on 22 November 2010 when the Union government constituted the M.B. Shah Commission under the Commission of Inquiry Act, 1952, to inquire into charges of illegal mining in the state. The report, which was delivered in two parts in March-April 2012, brought to light the “rapacious and rampant exploitation” of mineral resources which shocked Goa and even the nation.

The state government led by Chief Minister Manohar Parrikar acted swiftly and on 10 September 2012 suspended all mining in the state. Four days later, the Union Ministry of Environment and Forests suspended the environment clearances granted to 139 lease holders.

Mining lease holders approached the Bombay High Court at Goa to declare the Shah Commission report illegal and prayed for quashing the state and Union governments’ orders which brought mining to a halt. The Goa Foundation petitioned the Supreme Court to terminate all leases where mining was carried out in violation of law. The High Court petition was transferred to the Supreme Court.

On 21 April 2014 the Supreme Court passed an order declaring that all iron ore mining leases had expired on 22 November 2007 and all mining conducted after that was illegal. It also mandated that leases and environment clearances should be granted afresh.

On 4 November 2014 the state government said it had four options — auction of leases, takeover of mining by the government, granting of fresh leases or renewal of leases which were pending from 2006.

The government was studying the options when a legal complication was introduced in the form of a High Court ruling which stated that all lease holders who had applied for renewal in 2013 and had paid stamp duty should be granted renewal.

The state government abandoned all options and went in for renewal. This process was expedited when it became known that the Union government was planning to promulgate an ordinance to make auction the only route for grant of leases.

Between 5 November 2014 and 12 January 2015 about 88 mining leases were renewed, with as many as 31 getting the government nod a day before the ordinance was promulgated.

This resulted in the Goa Foundation filing a second petition before the Supreme Court which eventually resulted in stopping of mining in Goa on 15 March this year.

The Goa Foundation understood ground realities and showed tremendous courage and grit in effecting a clean-up of the ruin created during the boom years of mining. The Supreme Court’s comments on the mining industry are scathing: “Rapacious and rampant exploitation of our natural resources is the hallmark of our iron ore mining sector coupled with a total lack of concern for the environment and the health and wellbeing of the denizens in the vicinity of the mines.”

A host of factors resulted in this scenario. First was the willingness of the state government to play handmaiden to mining companies, the second was the reluctance of mining lease holders to accept the April 2014 judgment of the Supreme Court and the third an intervening High Court order that gave all stakeholders a short-lived short-cut. 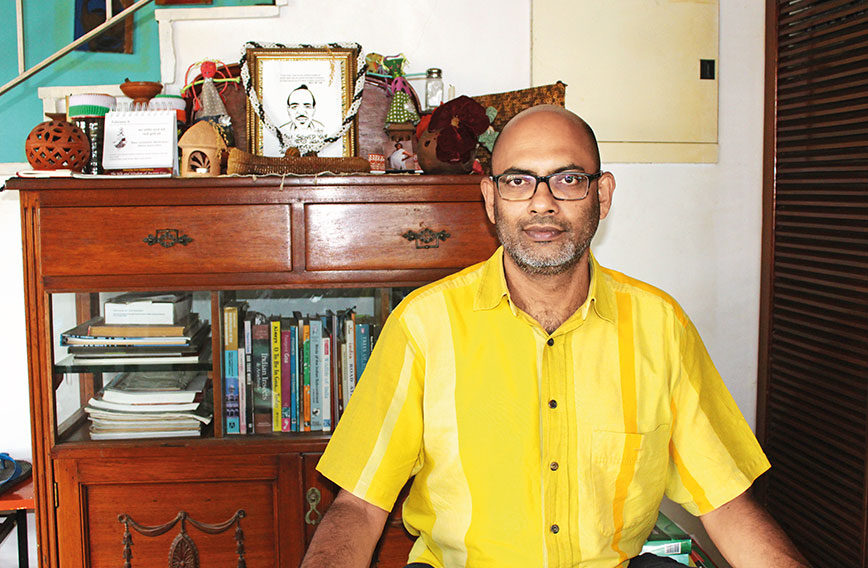 “The state had an opportunity from the first Supreme Court judgment (2014), which declared all mining leases illegal from 2007, to start with a clean slate. We could have done something different which would have been beneficial to most Goans,” remarks Basu.

With Chief Minister Parrikar indisposed, Union Minister of Road Transport and Highways Nitin Gadkari was dispatched to Goa. On the eve of his arrival, those affected by the closure of mines virtually blockaded Panaji. The Union minister however, poured cold water on the hopes of mining companies. He categorically ruled out an ordinance and favoured the auction route, but promised to back a review petition.

Ambar Timblo, president of the Goa Mineral Ore Exporters’ Association (GMOEA), sees the present situation as ‘catastrophic’. “There is no clarity on whether mining is a sustainable enterprise,” he says. “The present juncture is very uncertain because we have a legal mess, a fragile government and a collapsed market.”

The impact of the ban is going to be huge. According to the GMOEA, the industry provides nearly 60,000 direct and indirect jobs. About 36,000 truck drivers and cleaners employed in 16,000 trucks are now stranded in no-man’s land. The barge industry, which employs nearly 4,000 people on 230 vessels, is also staring at an uncertain future.

Six days after the mines were closed the Vedanta Group, the largest iron ore exporter, asked 2,000 employees not to report to work to reduce operational costs. Fomento Resources, which is the second largest exporter, has asked 800 employees to resign and more could also have to go.

Certain interior villages which were dependent on water extracted from pits and supplied by mining companies will be affected once supply stops on 30 May. Fomento alone has 6,000 water consumers and practically all will be affected by the closure.

Sitting in his Panaji city office, Timblo, who is also the managing director of Fomento Resources, asked, “Which part of the Goa Foundation petition is in public interest? How is public interest served if the mines are closed?”

“The situation is going to get worse,” he explained. “When the mines were shut down in 2012 we were able to manage on account of the profits made during the boom years. When mining restarted in April 2015, the commodity market crashed and volumes were restricted to 20 million tonnes. After one-and-a-half years of operation, mining has been shut down again and there is no clarity on when it will start.”

“After the leases were renewed till 2027, we reinvested to start the mines. Now all that money is lost,” Timblo said. “The government has collected Rs 1,700 crore as stamp duty. Will they return it now that leases have been declared illegal?”

With the Supreme Court placing a cap on total extraction of ore and a drastic drop in international prices for low-grade ore, only 28 of the 88 leases were being operated following the 2015 reopening.

Ore exporters got some breathing space when the Supreme Court allowed sale of ore that was mined before March 15 and stacked at jetties or within the lease area. “This is expected to get exhausted in a month or so,” said Timblo.

Strongly opposing auction of mine leases, Timblo said, “It is not feasible in the Goa context. About 35 percent of your revenue goes to the iron ore fund, district mineral fund and as royalty to the government. In addition we have to pay corporate tax and now we will have to pay auction money. How can one operate a business if 95 percent of your profit is going to go back to the government?”

“Where has auction happened successfully in other parts of India?” he asked and claimed that none of the mines auctioned in Odisha or Karnataka are working because of high costs.

Timblo’s views on the auction route are also shared by Arun Kumar Rai, former director of Vedanta Iron Ore. Explaining the Goa mining scenario, he said, “Goa has iron ore reserves of nearly 1.5 billion tonnes. But most of it is low-grade with Fe content below 54 percent. While technology gaps exist, low-grade ore is not used in local steel mills for economic reasons.”

“Beneficiation does take place and this can increase the Fe content by two to three percent, but this comes at a cost,” Rai added. “Then, you have to negotiate with the Chinese who drive very hard bargains, sometimes asking for up to 30 percent discounts.”

“Given Goa’s location along the west coast, the best option is to export the ore,” said Rai, adding that players from outside the state would also look at exports since local use would be expensive because of the cost of transportation to steel mills located in Karnataka.

“The best option is to dig and sell because even screening has its drawbacks. For example, 100 tonnes of ore could be reduced to 30 after screening. So, costs matter a lot in this industry," explained Rai. He regretted the mining business had been much misunderstood. “It has been used, abused and misused," he said.

The Goa Foundation too has arrived at the conclusion that auction of leases is not in the best interest of Goa, but for different reasons. Its prime concern is that the environment will once again be at risk if leases are handed back to companies that were responsible for the mess in the first place.

“Zero-loss mining is possible only if the government takes over the mines, forms a corporation and raises contracts for excavation,” said Basu. “The expertise is available in Goa itself and the National Mineral Development Corporation would be more than willing to help.”

Ever since the mining crisis hit the state in 2012, the  Goa Foundation has presented the government with plans and ideas on how to resolve the issue. “Our recommendation now is to treat minerals as family gold. This gives you two choices. One is you keep the gold and let your children inherit it. The second is to sell it and buy land and your child gets the land which will give income. By mining, the government is selling the mineral. So you have to get the full value of the mineral. The second principle is that the earnings have to be saved. Other countries create a mutual fund and the income from the fund is shared with all people as a dividend.”

According to the Goa Foundation’s calculations, iron ore valued at Rs 65,058 crore was sold illegally between 2007, when leases expired, and in 2012 when mining was stopped. “As per the Supreme Court order, this has to be recovered,” asserted Basu. “If this amount is placed in a mutual fund it will earn each resident Rs 1,000 per month for a lifetime.”

Based on information provided by Vedanta in their annual reports and GMOEA, the Goa Foundation calculated that mining companies in Goa made collective profits of over Rs 35,000 crore between 2004 and 2012 while the state government got only Rs 2,400 crore in the form of taxes and royalty, which is a measly five percent.

“So what happened was that the state sold ore valued at 100 for 5 and mining companies picked up all the profit with the central government earning 30 percent,” explained Basu. “The profit made by mining companies is larger than the revenue earned by the state in all those years.”

In 2014 the the Goa Foundation had suggested that since the issuing of fresh leases and environment clearances could take between two to five years, the government could sell some of the dumped iron ore lying around and put the rest back into the pits.

“There are about 750 million tonnes of dumped ore lying around which is an environmental hazard. Take what cannot be sold and put it back into the pits and create employment. Parrikar estimated that about 20 percent of the dumps, which is 150 million tonnes, can be sold. So you don’t have to undertake mining for at least seven years. This gives the land some breathing space," said the foundation.