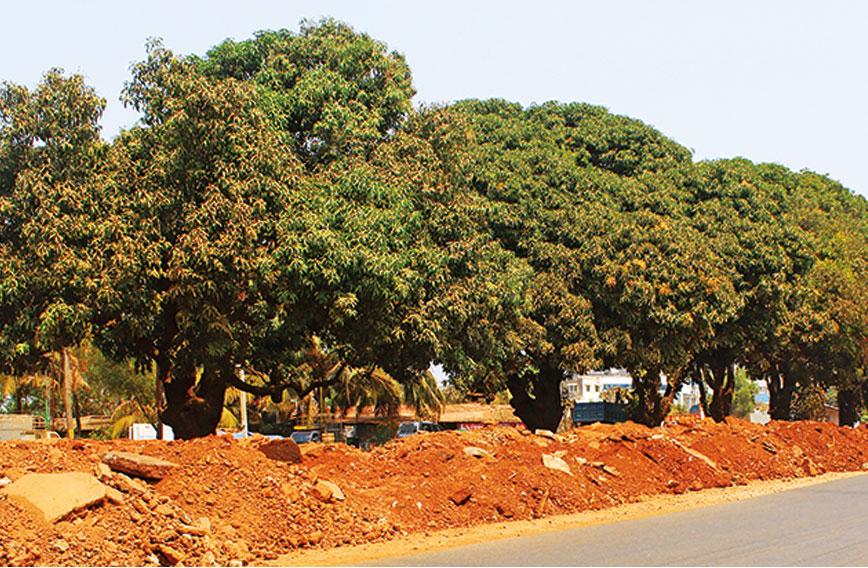 Goan village wants road and its six mango trees too

In the village of Colvale, which has been sliced into two by NH-66, there is an uneasy calm. Despite an assurance from PWD Minister Sudin Dhavalikar that six mango trees would not be felled for expansion of NH-66, Wendell Rodricks, well-known fashion designer and Padma Shri awardee, who led the protest to save the trees, is not completely satisfied.

In fact, he is angry at the unplanned development that has turned his once idyllic village into a semi-urban entity sans proper infrastructure.

The protest in Colvale began in the last week of February when excavators started cutting up chunks of the old roads close to the six mango trees. “These trees are nearly 200 years old and are a natural canopy,” said Rodricks. “Traditionally, trees of this nature were planted at the entrance or exits of villages and Assonora and Tivim also have them. The mango trees are a cultural landmark. They are embedded in our collective memory.”

This is not the first time that village groups are protesting against the felling of trees for expansion of the highway. Earlier, activists had protested against plans to cut down over 100 coconut trees lining the highway at Guirim which is around seven kilometres from Panaji on the road to Mapusa in North Goa. The alignment was adjusted to ensure that the trees were lined up along the median and on one side.

According to local media reports, around 3,577 trees will be chopped down to make way for the expansion of NH-66 in North Goa alone. The new highway, which comprises two major bridges across the Mandovi and Zuari rivers, underpasses and flyovers, will have four lanes with service roads on either side. This essentially means six lanes cutting through highly populated areas, in which green areas are being sacrificed in the name of development.

When asked why the banner of protest was raised so late in the day, Rodricks said that was not correct. “Earlier, buses en route to Mumbai used to pass through our village. Then, in 1995, when there was talk of building a highway, my father and I protested because it meant the six trees would have to be cut down. Eventually, the two-lane highway was aligned with both lanes going around the trees on either side. Then, when plans for expanding the highway were being discussed, we were told that a bypass would be constructed along the Konkan railway via Rivora and the trees would not be cut down.”

The village accepted this assurance. But in the last week of February it was noticed that the road on either side of the trees was being excavated, leaving the roots dangerously exposed. This rang alarm bells in the village and the protest began.

“When I called the contractor, he told me that these 12-metre-tall trees would be cut down to four metres. How can these old trees survive such an onslaught?” asked Rodricks.

He also pointed out that detailed plans regarding land acquisition in Colvale and alignment of the highway were never made public and this is one reason why the villagers were taken by surprise when expansion work began. “They have raped us and used us,” he lamented.

In a letter dated March 7, addressed to the president of India, prime minister, chief minister, Union minister of road transport, the state PWD minister and others, Rodricks listed the quantum of land (24.3 lakh sq m) given by Colvale for an industrial zone, central jail, irrigation canal, housing board, power grid and highway expansion, and explained how all these development projects have turned Colvale into a semi-urban sprawl. “How much more land can we give?” he asked.

The battle to save the six trees is not the only one being waged by the internationally acclaimed fashion designer. The possible demolition of an over 100-year-old chapel located near the highway has incensed villagers. Rodricks’ letter to President of India, Ram Nath Kovind, and others has an attachment to prove that the chapel is over 100 years old.

But what is more worrisome is the fact that, once constructed, the six-lane highway will make it more difficult for people to cross to the other side of the village. “Why can’t they build an underpass for us?” asked Rodricks. “People have to cross the existing highway to go to the church, the temple and the school. How are they going to do it once it is expanded to six lanes?”

Rodricks’ solution to the problem is simple: construct a Y-shaped column flyover which would save the trees, the chapel and provide easy crossings for villagers. But there has been no assurance till date on these demands.

Rodricks is also at pains to explain that he or the village is not against development. “I am not saying, don’t build a highway. I am not stupid. If you are not going to keep in mind the impact of the highway on locals, then what kind of development is this?”

Speaking to the media soon after the protests broke out, Dhavalikar said, “The trees near Colvale will not be cut. Some of these trees predate our grandparents and we will not permit anyone to touch these trees, neither engineers, nor contractors, nor consultants.”

“Chief Minister Manohar Parrikar, Union Minister Nitin Gadkari and I have saved trees on the Guirim stretch in the past so we will ensure that the trees here (Colvale) will be protected,” Dhavalikar had assured.

This assurance by the minister will ensure that the six mango trees will not be touched for now, but a permanent solution, which Colvale is looking for, will come only when a minor realignment of the highway is notified. Until then, even Rodricks will have to wait with bated breath.