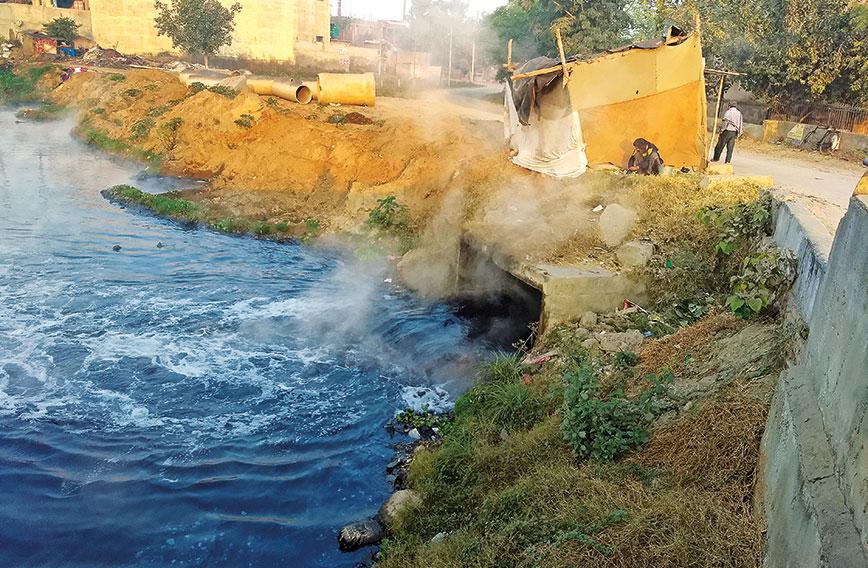 An aggrieved and highly agitated group of citizens in Ludhiana has hit the hot, dusty streets of this industrial city to seek protection of their right to life.

“Enough is enough. This time it will be a fight to the finish,” says Gurpreet Singh Chandbaja, a leader of the Naroa Punjab Manch (NPM) and president of Bhai Kanhaiyaji Cancer Prevention Society.

The NPM is an initiative by citizens from Ludhiana and the scores of villages that lie on the banks of the Sutlej river in Malwa region of Punjab.

“For the past 40 years, the poison spewed by the Buddha Nullah has brought death and disease to our people. They are dying of cancer. Our crop yields have reduced and our livestock develop maladies that even the vets are unable to identify,” he says.

Ludhiana is the business capital of Punjab and figures among India’s top 10 cities with the maximum number of high-end vehicles such as Mercedes, BMW, Jaguar and Range Rover cars. It is Punjab’s largest city and contributes the most to the state’s Gross Domestic Product (GDP). The Ludhiana Municipal Corporation has the biggest budgets — `1,200 crore in 2018 —  among all cities in Punjab.

The Buddha Nullah, earlier known as Buddha Dariya, is a tributary of the Sutlej. It separates from the river near Koom Kalan village and rejoins it downstream after flowing through Ludhiana for 15 kilometres.

“Successive governments have failed to protect our Right to Life as per Article 21 of our Constitution, which is the very basis of any society. Despite the fact that everyone is aware of the serious nature of the problem, no civic body or government department has come forward to do anything,” says Chandbaja.

The incidence of cancer and infectious diseases is the highest among people living along the banks of the polluted Sutlej after the highly toxic Buddha Nullah disgorges into the river the poisons it collects after flowing through Ludhiana.

Says senior Punjabi poet and writer Jasveer Singh Bhalooria, “Though I had heard of the nullah, I had never seen it. I thought of Ludhiana as a city that brought glory to Punjab and even penned a long poem in its praise.”

Bhalooria’s impression about the city changed drastically after he witnessed a citizens’ protest march convened by Chandbaja near Walipur Kalan village, where the nullah rejoins the Sutlej. The protesters were mainly from villages downstream. They had got together to pressure the authorities into finding a permanent solution to the dirty nullah.

Bhalooria puts it this way: “I saw shock in the eyes of the people who were seeing that river from hell for the first time. The hell that we visualise after death was in front of us for real. Thick wafts of putrid air attacked our sense of smell and, after a period of time, we just couldn’t smell anything.”

Jaskirat Singh, a leading activist of the movement, says, “The water was black, thick with every kind of pollutant. We could make out chemical waste, untreated waste from factories, mainly electroplating units and dyeing units, untreated sewerage and the worst muck that one can imagine.”

The participants in the protest march decided to take the matter into their own hands. For 40 years they have seen people falling prey to the worst diseases, their neighbours getting physically deformed and ultimately dying of cancerous growth in all parts of their bodies.

Deadly carcinogens enter the food chain through water absorbed by crops and vegetables grown on the banks of the river, thereby spreading disease and death further into the hinterland. The groundwater along the river and its canals was found to also contain high quantities of arsenic and uranium.

A study done by the Punjab Agriculture University (PAU) in 2006 had pinpointed this state of affairs. “But the government tried to hush up the findings at that time,” said a social activist on condition of anonymity.

In their collective wisdom government officials then decided to cut off the nullah from the Sutlej by creating mud dams near Koom Kalan village where it separates from the river. So by the time the nullah crossed Khasi Khurd village, its bed was totally dry. No fresh water flowed into it. The nullah assumes its present form while flowing through the city.

For a city of over two million people (as per growth projections based on the 2011 census), the Municipal Corporation has only three sewerage treatment plants with a total capacity of 311 MLD against a requirement of 750 MLD. What is worse, these plants do not even function at full capacity. The Municipal Corporation has been directly dumping raw, untreated sewerage into the nullah. Add to this the regular discharge of mostly untreated industrial effluents and the nullah turns into a cocktail of pollutants.

As per the PAU study, industrial effluents discharged directly into the nullah increased the concentration of metals multiple times in its 15-km journey through the city. For example, the mean content of chromium, nickel, arsenic and lead increased by 260, 140, 42 and 19 times, respectively, along with very high levels of COD (Chemical Oxygen Demand) and BOD (Biochemical Oxygen Demand).

The study revealed a high concentration of deadly microbes such as E.coli, Shigella, Vibrio, Salmonella, Enterococcus, Klebsiella, Proteus and Pseudomonas, indicating pollution from human and animal faecal matter. What is worse, water samples from hand pumps and submersible pumps along the Buddha Nullah downstream at Haibowal, a locality in Ludhiana city, were found to be heavily contaminated.

Residents of Ludhiana depend mainly on groundwater. The PAU report presented a damning picture of the quality of water being consumed by individuals (mostly the weaker sections and industrial labour) from hand pumps within 200 metres of the banks of the nullah on either side. The water contained metals like lead, chromium, cadmium and nickel.

As per the report, the poisonous drain has led to contamination of soil, crops, and whatever vegetation exists on the banks of the Sutlej right across the Malwa region up to the border districts of Rajasthan. The bacterial count in the Sutlej increased 10,000 times three kilometres downstream from its confluence with the deadly drain.

Of late, the matter has been taken up by the National Green Tribunal (NGT), which has directed the Punjab Pradesh Pollution Control Board (PPCB) and other related departments to come up with a permanent solution, instead of wasting Rs 2 crore and more every year on ‘temporary’ cleaning.

A delegation of the Naroa Punjab Manch along with the Tapvan Trust from Rajasthan — the river water affects nine Rajasthan districts which border Punjab — met Union Minister of Jal Shakti Gajendra Singh Chauhan on June 20. Among other measures, they have demanded completion of Common Effluent Treatment Plants (CETP) and upgradation of Sewage Treatment Plants (STPs). The minister has assured all help to them — like many others in the past.