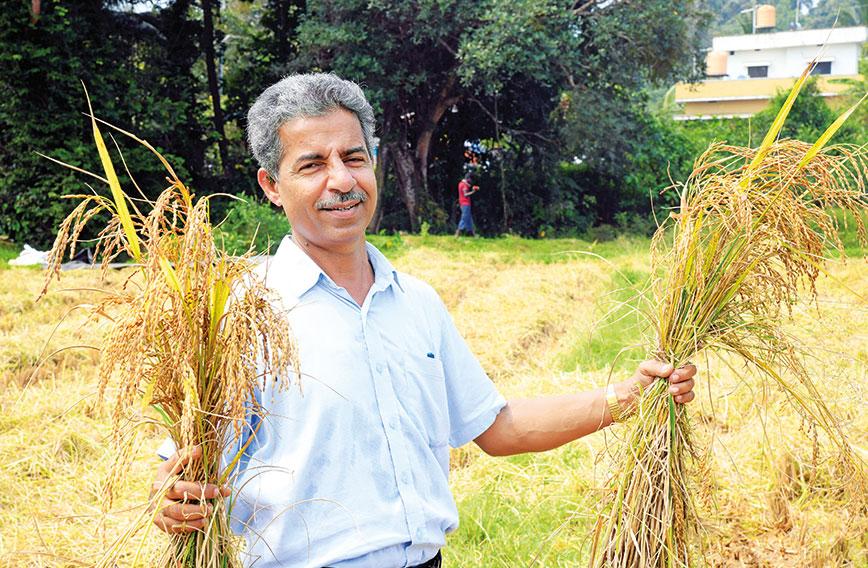 WHEN the school’s golden jubilee was to be celebrated last year, Murali Kadekar, headmaster of Nittur High School in Udupi, wondered what they should do. It must be a significant gesture, he thought, as he wracked his brains for an idea.

Then it struck him that he used to cycle all the way from home to school every day, passing lush paddy fields on both sides of the road. But those fields had long vanished. What if he could get his ex-students to revive them?

Kadekar’s seed of an idea eventually succeeded in reviving 50 acres of defunct paddy fields. It became the school’s gift to the surrounding community on its golden jubilee. Inspired by what the school had done, some farmers voluntarily revived another 20 acres of paddy fields. Local history was created even in the midst of the pandemic.

Kadekar, 59, retired from service on October 31 last year just as machines began harvesting paddy in the fields he had helped revive. The rice is organic and is being marketed under the brand name of Nittur Swarna. Consumers say it tastes excellent.

Kadekar taught at Nittur High School for 32 years. He was appointed headmaster during the last few years. Apart from introducing his students to farming, Kadekar started many heartwarming initiatives to help poorer students in his school.

Kadekar’s brainwave, of reviving paddy fields, struck him in the last week of February 2020. He convened a meeting of villagers, mostly his old students. About 25 turned up. Kadekar told them what he had in mind.

They listened to him bemused and listed all the problems. “There aren’t any drainage channels so how can we cultivate paddy?” “Those paddy fields are infested with wild plants and look like forests.” “We won’t be able to demarcate the fields.” “No field has bunds.” “Will the paddy field owners agree?” “A few paddy field owners don’t even know the boundaries of their fields.”

No one was interested. But Kadekar wasn’t taking no for an answer. “At least let’s go take a look at those fields, study the issues and see how we can resolve them,” he replied. 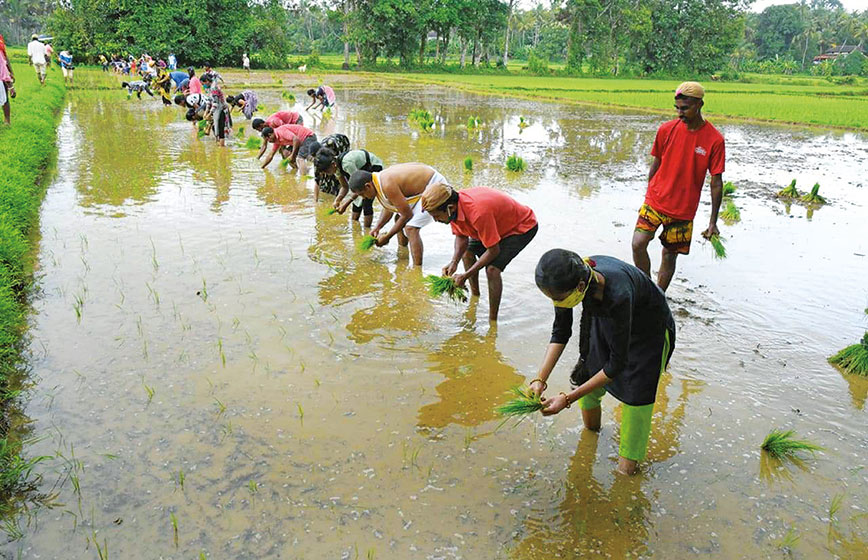 So Kadekar and his ex-students went off to see fallow fields within a radius of 12 km from the school in Kakkunje, Puttur, Nittur, Karambally and Perampally. Four of these five  areas were entrusted to four ex-students who were named assistant warriors. One was assigned to an ex-headmaster. The group comprised Bhaskara D. Suvarna, 65, Dinesh Poojary, 38, Ranjan Shetty, 32, Harish Acharya, 44, and Sudhakar Kotyan, 49.

They noted that for several km there was no drainage channel or bunds. Excess rainfall wouldn’t drain away or be retained when it needed to. The fields had wild plants, trees, plastic and glass waste which would need to be laboriously picked by hand.

The team identified all the problems that they would need to overcome — physical, fiscal and psychological and informed Kadekar. But he still wouldn’t give up.

Recalls Ranjan Shetty, assistant warrior of Puttur region, “I had attended the first meeting. Listening to everyone’s reactions, I thought, this is impossible. But mashtru (teacher) was adamant. We have to do this,  he kept telling me. He asked me to convene a meeting with the paddy field owners. He said, let us discuss everything with them, there will be a way out.”

So, led by Kadekar, the team now went to meet the owners of the defunct paddy fields. No amount of coaxing and cajoling could persuade the paddy field owners to restart cultivation. Most of them were very elderly. Their children had gone off to work in distant cities.

The team tried their level best. Suggestions flew back and forth. Somebody suggested that if each paddy field owner could pay just Rs 25,000 they could start cultivation and repay the money after selling the rice.

The paddy field owners turned their faces away. “If we have to pay, we aren’t interested. Let the fields continue to remain fallow,” they said.

Kadekar and his team hadn’t drawn up a budget or planned how they would sell the produce. He made two points clear, though. “We are simply rejuvenating the fields for one season. We want to show it is possible to revive fallow fields with community effort. The school doesn’t want to make any money. If at the end of it all we have a surplus, we don’t want to keep it,” he said.

Time was ticking away. If they waited for the landowners to make up their minds, they would lose the cultivation season. Kadekar appealed to local villagers to contribute. “Once the paddy is sold we will repay you on priority,” he reassured them. “And if the crop fails and we incur losses the school will reimburse you,” he added.

A new problem cropped up. What should they do with all the soil they had dug out? Luck smiled on them. A gentleman was preparing a new paddy field some distance away. He was getting lorry loads of fresh soil to fill the low-lying area. Poojary contacted him and he said he would buy the soil.

Next, they needed to clear all the shrubs and trees growing on the fallow fields. Labour charges were prohibitively costly. Luckily, another gentleman offered to clear the fields if he could be given the trees free. They agreed. Some paddy fields had to be cleaned by the school. It cost them Rs 50,000.

Having come this far, all the assistant warriors were now determined to revive the paddy fields.  Two of them, Poojary and Harish Acharya, assistant warrior of Karambally, had no experience of farming. 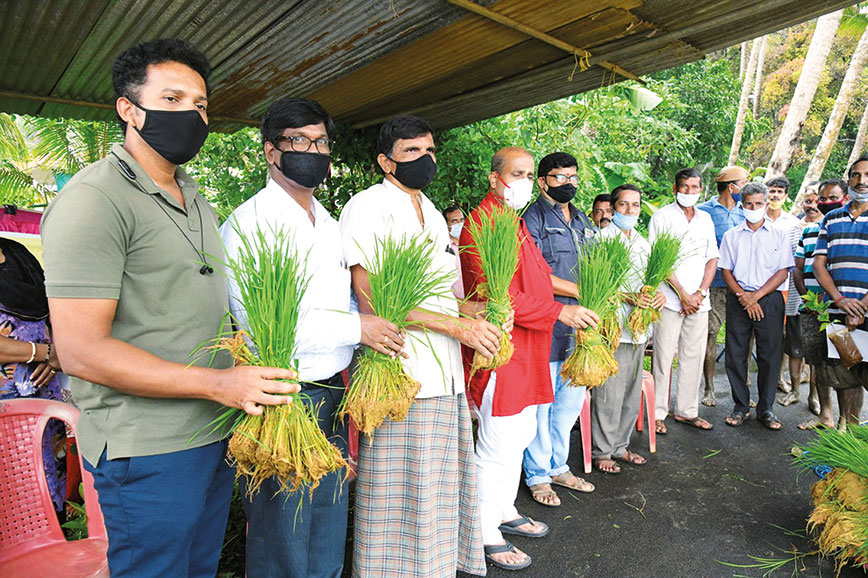 Each assistant warrior had to revive around 10 acres. They persuaded the paddy field owners to agree. A few people contributed money but it wasn’t enough so the warriors paid from their own pockets.

Suvarna says there was so much plastic waste in the fields assigned to him that it filled four lorries. Kakkunje’s 10 acres belonged to 15 owners. It cost him Rs 2.5 lakh to revive his fields out of which people contributed Rs 1.5 lakh. “Some people who don’t even own paddy fields have contributed out of appreciation,” he remarked.

Sudhakar Kotyan, assistant warrior of Perampally, works for the local municipality. He got two of his friends, Dinesh Suvarna and Prashanth Bhat, involved in reviving paddy fields lying fallow for 10 to 12 years. The trio incurred an expenditure of Rs 130,000.

Sudhakar Kotyan hopes next year at least some paddy field owners will start cultivating on their own. “In Perampally, another 20 acres are still lying fallow,” he says.

Dinesh Poojary, assistant warrior of Puttur region, runs a real estate business. Although he knew nothing about farming, he began work with great enthusiasm. Not one out of the 12 paddy field owners in his area turned up to see their fields being revived. But Poojary didn’t get disheartened. “We believe the land need not be ours. I learnt many good things about agriculture. The pleasure one gets from farming you can’t get from running a business,” he remarks.

“I don’t own a paddy field. I had never learnt farming. But now I would like my children to learn cultivation. I took them to see all the stages of rice production. Earlier, sometimes they would waste rice on their plates. Now they don’t waste a single grain,” he says.

Ranjan Shetty, who headed the Nittur region, owns JCBs and tippers, deals in construction materials and runs a transport agency too. “At one stage bund construction became a real bottleneck. In our area, nobody knew how to construct them either. After many enquiries, we got a team from Someshwar. They were experts in bund making. To build bunds for seven acres, we spent Rs 50,000.”

“I had no knowledge of agriculture at all. Initially I suffered a lot of tension,” says  Shetty, “I wondered many times whether in the midst of my nicely running business, I should have taken on this headache. But after completing my task I feel proud.”

Karambally’s team leader, Harish Acharya, is a goldsmith with no knowledge of farming. But, he says, since childhood, he has been interested in farming. He created a group of like-minded friends who call themselves the ‘Karambally friends’. They had been cultivating a 2.5-acre fallow field in a nearby area.

At Karambally, 9.5 acres were revived. “A few people gave us Rs 3,000 to Rs 5,000. I paid the rest. We have spent Rs 93,000 so far,” he says. “But none of the landowners want to continue cultivating next year. They want me to shoulder this responsibility again.”

One advantage was availability of machinery on rent. The assistant warriors could get machines for transplanting and harvesting and polk lines were used to clean fallow fields. Most work was done by machines.

Another advantage was that since the lands were fallow for so long, manure was not needed. Although there were moments of anxiety, the team didn’t succumb to the temptation of using chemicals. When a part of their fields got flooded and the crop seemed susceptible to disease and pest attack, they politely turned down advice to spray chemicals. Luckily, there was no serious pest or disease attack. So the rice was organic, an advantage in marketing it. 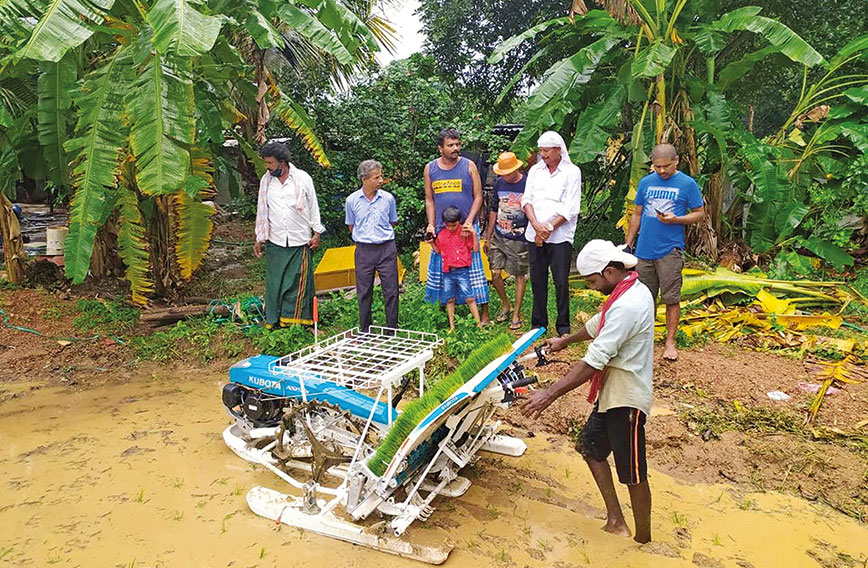 Machines were a big help

Kadekar’s wise decision to delegate responsibility at an early stage of the project made it very result-oriented. “It’s their area. They can influence local people and activities. Luckily, they took complete charge and inspired local people to cultivate,” he says.

The team is expecting a crop of 25 tonnes. The price of ordinary rice in the local market is Rs 40 per kg. The school has priced its Nittur Swarna organic rice at Rs 50 per kg. “Our first priority is to pay back the villagers who generously gave us money,” says Kadekar. “We will submit all accounts.”

Kadekar had achieved a task considered impossible. “If some of our old students realize the difficulties and importance of farming, I will consider our efforts worthwhile,” he says.

He had planned to involve students in his paddy revival programme but he refrained because of the pandemic. “I wanted to take their parents’ permission and involve them in some stages of rice cultivation,” he says.

For the past five years, Nittur High School has been coaching its Class 10 students in farming. Every July they take part in paddy cultivation on a farmer’s field. Teachers also join in. They visit the farm a second time during harvesting. Students help by carrying bundles of paddy and by thrashing the crop.

“So far 250 to 300 students have had this experience and they haven’t forgotten it,” says Kadekar. “Today’s learning by rote method of education doesn’t teach children important lessons of life. They don’t know anything about farming. When they harvest the paddy they themselves have planted, it gives them a new perspective and job satisfaction.” 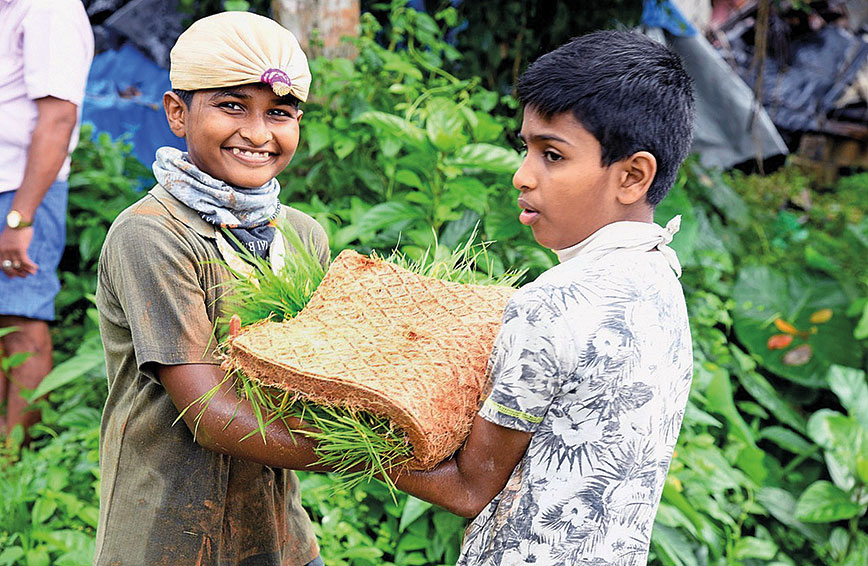 Nearly 85 or half of the 185 students in Nittur High School are from other districts. They are mostly children of labourers who have come to work in the district. They are very poor. Twenty years ago the school had started a savings bank account called Sanchayika for its students. The school was also a pioneer in the midday meal scheme.

Years ago, when a girl came to school in the morning, her eyes were red and her face swollen. Kadekar learnt she had two younger sisters and her parents were daily wagers. The girl used to get up at 4 am, light the stove and start cooking. She used to do all the housework and could study only after 9 pm.

On October 31, the day Murali Kadekar retired, a function was held to inaugurate the construction of a new house costing `4 lakh for Nayana, a poor student in Class 10. Kadekar had paid for it.