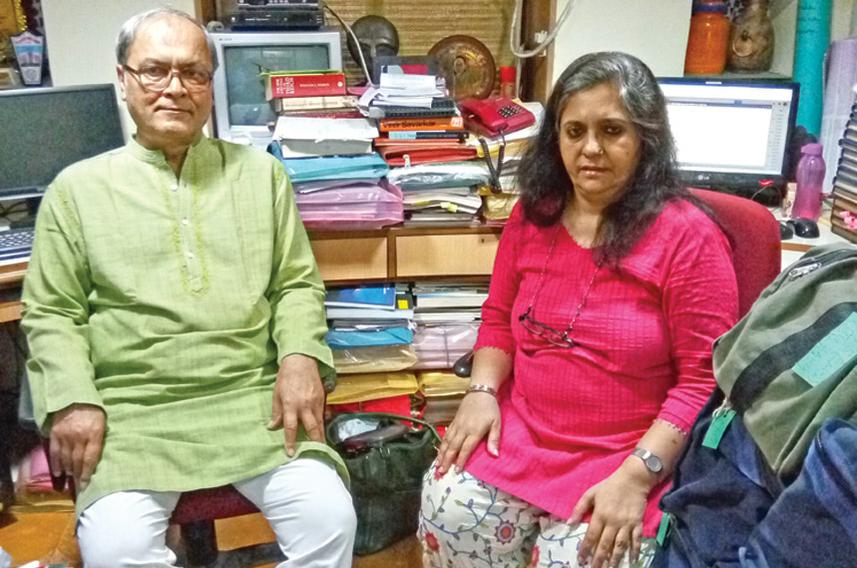 The government has cancelled the registration of the Sabrang Trust under the Foreign Contributions Registration Act (FCRA), citing six violations. It has accused Teesta Setalvad and Javed Anand, founders and co-trustees of the Sabrang Trust, of misusing foreign funds for buying personal items and made public a long and graphic list of items.

Civil Society put questions to Setalvad and Anand on the allegations against them. Here is their rejoinder.

You have been accused of diverting Rs 12 lakh from foreign sources for personal use. A string of items are listed. How could such expenses take place using the Sabrang Trust’s money?

The allegation is that because Rs 12 lakh has been paid towards expenses incurred through our personal credit cards, therefore all such payments “shall be treated to have been used for personal gain”.

The Sabrang Trust has provided copies of all our monthly credit card statements along with books of account, worksheets and monthly bank statements as evidence that the Trust was charged only for those expense items which were related to activities and objects of the Trust. The allegation is therefore baseless and mindless.

When we are living in a world where some countries are striving to do away with cash payments altogether, it is a curious proposition that merely using the same credit cards for personal and official expenditure per se amounts to mixing up the two types of expenditure. The Sabrang Trust has never had a credit card in its name. We doubt whether any credit card authority ever issues such cards in the name of trusts or companies because, if anything, such cards would be open to misuse. The only relevant issue should be whether personal expenses are charged to the Trust or not.

Your donors would have examined your accounts during this period. Did they raise any objections? Who were your auditors?

Our agreements with donors had a clause requiring the Sabrang Trust to maintain records for a specified period during which time the donor had the right to inspect them. There are known cases of donors, in fact, exercising this right when they had reason to suspect or believed there was misuse of funds.

In the case of the Sabrang Trust, however, at no point did any of the donors raise any objections or ask to inspect the Trust’s accounts. The agreements with different donors stipulated filing of ‘Activities Reports’ along with ‘Financial Reports’/ 'Utilisation Certificates’ signed by a chartered accountant and the same were provided to them.

More important, the Trust’s accounts are audited every year as per statutory requirements. The auditors of the Sabrang Trust are D.M. Sathe & Co., Chartered Accountants. The firm has been conducting statutory audits for four decades and, to the best of our knowledge, has never been found wanting by the relevant authorities. As may be seen from the annual Audit Reports, there was never any adverse remark from the auditors.

In fact, in April 2014, the Gujarat police called for the auditor’s response to specific questions in connection with allegations by the police about diversion of funds by us. The trustees fully co-operated with the auditors in the ‘re-verification’ of the accounts of the Sabrang Trust. After this, the detailed auditor’s report to the Gujarat police, among other things, stated: “On the basis of information and explanation received and the documents examined by us we do not find any expenses of personal nature (charged to the Trust).”

Among the charges is one of shared infrastructure. What exactly is the position?

Any reasonable person would agree that to carry out a major project running for several years you would need office space, furniture, equipment and staff. The Sabrang Trust did not have any of these. So the trustees had the option of hiring or buying all of this, which is an expensive proposition. Or, they could cut costs by a sharing arrangement with some other organisation.

What exactly is the role that the Sabrang Trust plays? How is it differentiated from Communalism Combat and Citizens for Justice and Peace?

The Sabrang Trust’s primary activity over the years has been running an innovative educational programme — KHOJ: Education for a Plural India —  in schools in Mumbai and elsewhere in Maharashtra.

In recognition of the merit of this programme, Teesta, the project director, was appointed a Member of the Union government’s CABE (Central Advisory Board of Education) for many years. The KHOJ project was also funded by the HRD Ministry for three years (2011-2014). In addition, the Sabrang Trust also executed a major Ford Foundation-funded project for Conflict Resolution and Peace Building between 2009 and 2013.

We are founder-trustees (along with seven others) of Citizens for Justice and Peace (CJP). Formed in April 2002 in the backdrop of the communal carnage in Gujarat, the primary activity of CJP has been providing free legal aid to the survivors-witnesses of the mass crimes in Gujarat. It has also intervened and mobilised resources for relief and rehabilitation of victims of terrorist activities in Mumbai, Gujarat and Kashmir. CJP is today nationally and internationally recognised for its legal interventions, having resulted in the (unprecedented for India) convictions of the perpetrators of the 2002 communal violence in Gujarat.

What is the future of the Sabrang Trust?

The trust will challenge the MHA order cancelling its FCRA registration. Despite all attempts to silence us, the KHOJ programme of the Sabrang Trust is ongoing and will continue with or without foreign contributions, just as CJP’s legal intervention activity continues despite all hurdles, including politically motivated cases against us.