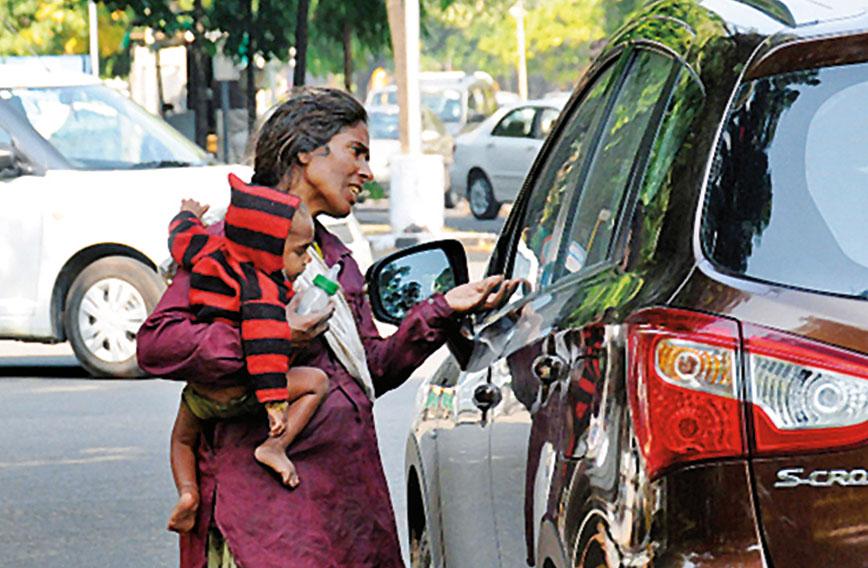 A few years ago, I was in Bengaluru to attend a meeting called by the government of Karnataka.  On my way to the venue, the taxi I was in stopped at a traffic light. Within a few seconds, a young lady with a child strapped to her shoulders came up, seeking alms. She explained that she was a single mother whose child was sick and she needed money for the baby’s medical treatment.

My thoughts immediately raced back to an article that had recently appeared in a national daily about how one- and two-year-old babies were rented out to professional beggars. And how these babies were usually given cough syrup regularly to ensure that they were drowsy and slept through the entire day. Without waiting to think, I immediately confronted the young woman with questions. She retreated in fear. Not for a moment did I consider that what she narrated could be true and that this child may need medical treatment. As I sat thinking about this incident, I wondered how I had based my views on a newspaper article and concluded that she could be a con-woman.  I was also sad and ashamed that I had wired myself into not believing that she could be telling the truth.

A different kind of incident happened a few months later on another of my visits. I was walking down a busy street in Malleswaram, a bustling middle-class suburb in Bengaluru. Unable to bear the traffic and jostling crowds, I was looking forward to leaving the place as soon as I could. It was then that I noticed a woman, around 25 years old, walking in the middle of the street. She suddenly looked at me and asked if I could help her reach the nearby bus stand. It was then that I noticed the white cane in her hand. Holding her hand, I started leading her across the street towards what I thought was the bus stand.

I politely asked if I could help her onto the pavement instead of walking in the middle of the street.  She told me that she preferred to walk on the street as she found it easier to negotiate than the uneven pavements. She recounted how she had fallen many times on the pavement and realised that it was wiser and safer from her point of view to walk on the carriageway. She just couldn’t trust the local civic authorities to ensure a safe pavement that people like her could use confidently.

She was humming as we walked along, and I found her happy face fascinatingly different. Engaging her in conversation, I learnt that she was planning to complete her graduation and was confident of doing so in the next few years.  As I helped her along, a strange thought hit me. I wondered how she could trust a complete stranger to help her. I asked her and the reply left me dumbfounded.

She said that at least three to four people helped her every day. Her logic was simple. Despite all the evidence and news of women being abused and harassed, she had not come across a single instance when the trust she placed in complete strangers was ever misplaced. She said that she always received trust and goodness from people whom she trusted completely. She could not understand how it could be otherwise.

What a wonderful explanation this was for a person like me. Society and its complex demands have resulted in many of us being brought up not to trust people today. Children are told to be wary of strangers. We have come to believe that the meter in every auto or taxi that we hire will be doctored. We believe that every vendor selling fruits, vegetables or flowers by the streetside is out to cheat us. People and governments are increasingly growing wary of NGOs and the trust deficit only seems to be widening. Trust has, indeed, become such a rare commodity that it was wonderful to hear this lady’s simple deposition. What a wonderful world it would be if we could all learn to trust each other and allow ourselves to be trusted. For only when we trust can we expect people to be trustworthy.

As I sat thinking about these incidents, I realised how easily we build and sustain images of others and ourselves in our minds. Over time, we soon start stereotyping them and expect them to behave exactly as we expect them to. Any variance —physically, emotionally or intellectually, always seems strange and we cannot come to terms with any movement away from the benchmarks that we set for them.

A recent study by the Centre for the Study of Developing Societies (CSDS) in Delhi and the Azim Premji University, Bengaluru, has brought out the pattern of trust and trust deficit in several organs of the State.  What is disturbing is that people seem to trust our politicians the least.  Public representatives, who in a democracy are endowed with the mandate of legislating and shaping policies and programmes on our behalf, seem to be the least trusted. With elections around the corner, several senior politicians have told me in private that the electorate cannot be trusted to vote for them even after doling out money and other freebies.

The institutions of democracy and governance need high levels of trust amongst their several stakeholders for human development to be inclusive, equitable, just and fair.  Without trust in these institutions and in citizenry, the consequences will be immeasurably negative and possibly irremediable. What we now need is for each one of us to work together to create an ecosystem where every relationship begins with trust, similar to the young woman’s trust in me on that hot summer day. And this needs to begin with each one of us. We need to take the first step in what will be a long journey of learning to trust others and allowing ourselves to be trusted.