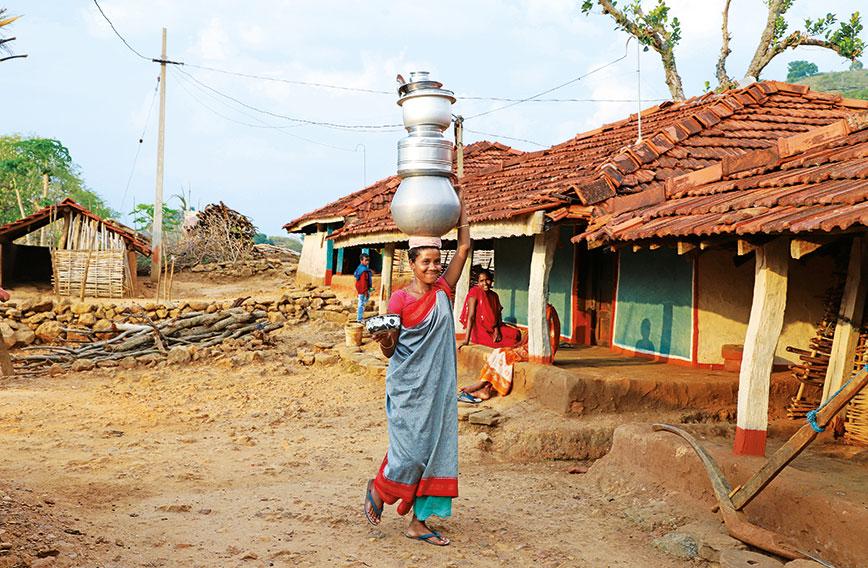 A new path for tribal women

You do not usually expect the presence of 14 women dressed in all their finery at a busy shopping mall to make headlines. One can agree that this is not breaking news. What makes the appearance of the women special is that they were all in their early thirties and were indigenous forest-dwelling tribal women from more than 100 km away.  The women were in the mall in Mysore to launch their ragi-based food products made in a factory that they owned and operated far away on the fringes of the Bandipur National Park.

The achievement of these shy and timid indigenous women sounds insignificant when one compares them with successful women entrepreneurs running large corporations employing thousands and generating crores of rupees in turnover. But those who know and understand the path that indigenous tribal communities have travelled over the past 70 years will be able to appreciate the enormity of what these women have attained.

The indigenous tribal communities constitute just a little more than 8 percent of India’s population and live in about 15 percent of the country’s area in various ecological and geo-climatic conditions. There are 705 ethnic groups notified as Scheduled Tribes (ST) and they live across 30 states and Union Territories. Tribal groups are at different stages of social, economic and educational development. While some have adopted a mainstream way of life, there are 75 Particularly Vulnerable Tribal Groups (PVTGs) who are characterised by a pre-agriculture level of technology, a stagnant or declining population, extremely low literacy and a subsistence economy.

Data from across the country clearly indicates that the benefits of affirmative action or of special development schemes have made minimal or no impact on their social, economic or political mobility. These are the communities which have been repeatedly displaced and dispossessed by large irrigation projects and extractive industries. It is unfortunate that despite having a Forest Rights Act, indigenous communities enjoy very little control over local natural resources that their habitats are endowed with. Centuries of operating in a traditional hunter-gatherer economy with little or no appreciation of the demands of the ‘market’ have placed tribal communities at a tremendous disadvantage.

Before the onslaught of ‘development projects’, large dams and forest conservation laws, tribal communities lived an existence that was sustainable and minimalistic. Their skillsets were more than adequate to ensure that they had a place to live in and food to eat. Being suddenly uprooted from their traditional habitats and relocated outside their comfort zone of a forest, tribal communities are today at a crossroads they never faced before. They can neither go back to the forests nor do they have the skillsets to cope and thrive in the modern world. It is against this backdrop that the achievement of these tribal women is worthy of celebration.

These women come from families that have been uprooted twice in their parents’ lifetime — by construction of large reservoirs and by the formation of national parks. On both occasions, the state never truly compensated them nor provided any sustainable rehabilitation.  An insensitive government machinery with no formal policy for rehabilitation and resettlement left their families to survive on their own. This has not changed much in many parts of the country even today. Despite newer laws, tribals are still silent and helpless victims of a ‘system’ that has neither the intent nor the patience to understand their concerns and needs, and formulate programmes and schemes that will truly empower them and help them survive in a world that hardly acknowledges their existence.

The present plethora of government schemes is designed by bureaucrats sitting in state capitals and in Delhi with little or no understanding of the anthropology, culture, traditions or current status of these indigenous tribal groups. What is needed is not ‘top down’ programmes of the State or humanitarian NGOs but ‘bottom up’ creation of opportunities that can fulfil the current aspirations of tribal communities.

These aspirations are slowly finding expression around the slogan ‘Jal, Jangal, Jameen’ (water, forests, land).  Development planners must not just acknowledge tribal voices but engage actively to seek them out and get them to articulate their true needs. They need to understand that unless one builds on the human and social capital of these communities, economic mobility will only remain a far-fetched dream.

What the tribal communities want are not doles from a patronising State or NGO but the skillsets, knowledge and space to participate as equals in a system that has consistently been denying that to them. They do need the social safety nets of affirmative action and special development assistance for the initial take-off. But beyond that are other social needs — good healthcare, contextually relevant and culturally appropriate education, livelihood opportunities, political voice, financial and social inclusion, and, more important,  recognition of being equal partners in their progress.

They need to be recognised as the custodians of local natural resources and made partners in any development projects that are undertaken in their traditional habitats. Beyond the romanticising, they also need the knowledge and skills to integrate and compete in today’s market-driven economy. They need to learn to survive not on the doles of a welfare state, but to live with the dignity and self-esteem that they have been traditionally known for.

What these women have done is to begin this journey for themselves. They are a beacon for other tribals and are demonstrating what can be done if they make up their minds to create a balanced reality for themselves. A position that enabled them to accept their landlessness, not with resigned helplessness but to look for other possible avenues. Along with this growing empowerment came their decision to source their raw materials only from local farmers, to provide nutritional supplements free to malnourished children in their communities and to differentially price their products so that other tribal and rural women could afford them.

What is needed now is to create a new generation of such leaders from amongst the indigenous tribal communities who can understand the current reality and the challenges that exist, and are prepared to traverse the road ahead. The time has come for them to articulate their own problems and seek solutions based on their strengths rather than on external resources made available to them. A new development paradigm will be fashioned when they develop the ability to negotiate the complexities of development and alongside retain their time-tested values, structures and traditional wisdom. This may be the path to sustainable development not just for indigenous communities, but for the whole world.

Dr R Balasubramaniam, the founder of the Swami Vivekananda Youth Movement, has lived and worked with indigenous tribal communities for over 25 years in Mysuru district of Karnataka. He can be reached at email@rbalu.com