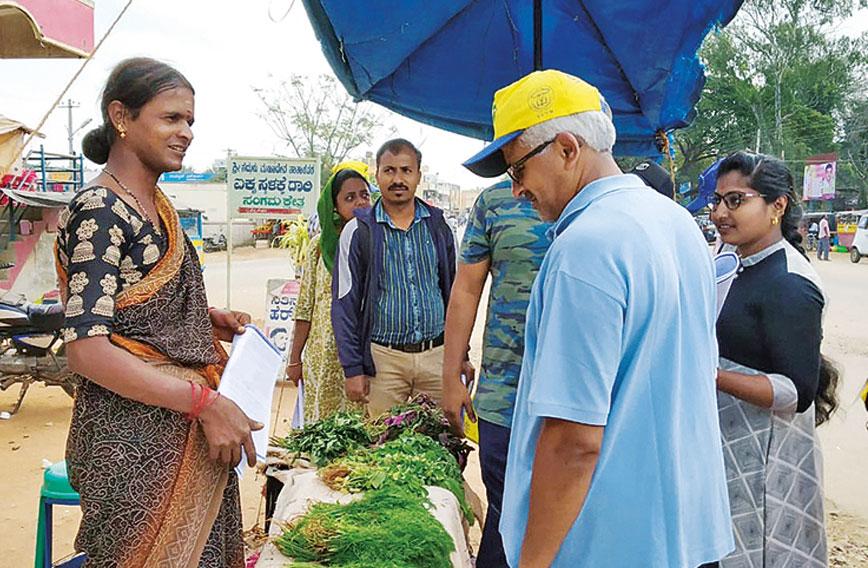 On foot in rural India

It was 12 years ago, in 2008, that I set out on a walk across rural Karnataka.  Spread over 30 days, the walk covered 420 km and we passed through 120 villages located in five districts of Karnataka. I had worked over 20 years till then in remote tribal and rural locations, and found myself wrestling with the question of what development is and whose development I was engaging in.

Struggling to seek answers, I decided that this walk would help me reconnect and re-engage with India’s rural realities and possibly help me find answers.  My message, ‘information is power’, helped me meet and interact with over 200,000 people and spread awareness of using the Right to Information (RTI) Act to fight corruption in public life. I could not resolve all my internal dilemmas, but the walk surely helped me frame the changing context of rural India and how the post-economic liberalization phase was affecting it.

If the 2008 walk was an opportunity to appreciate what rural development meant to people living in villages, the walk I undertook in December 2019 was one of reflection and self-discovery. Walking with like-minded people, sharing a similar personal quest, we covered 160 km over seven days through the villages abutting the city of Mysuru. This walk was an attempt to connect the external context with our own internal aspirations and needs.

This journey of inner reflection and immersive learning that each person experienced was a personal process. But what stood out were the changing realities of rural India. It opened our minds to the current crisis that peri-urban villages are facing and furthered our understanding of the complexity of the challenges ahead. The vulgar evidence of the rural-urban divide was not merely economic. The pressure on social structures, the shifting cultural narratives, the challenge of coping with newer demands on people’s value systems and the realistic need to alter one’s behaviour driven by urban trends were significantly visible.

Kaliah was close to tears as he narrated how he had sold his land a decade ago to a young techie from Bengaluru at a price that was far higher than what was prevailing then. He explained how he thought he had struck a good bargain only to soon realize that he could never put a value on what the land truly meant to him. Now that the money was long gone and the land was no longer his, he understood how powerful ownership sentiments were and how empty his existence had become. Every morning, waking up and seeing the fallow land that was once green due to his effort reminded him of the folly of what he had done. From being the master of his own destiny (however unattractive it seemed at the time) to searching for a source of livelihood with skills that were becoming irrelevant each passing day only served to leave him depressed and moody.

As we walked farther away from the city and closer to the villages, one could see the palpable difference in the way people conversed with us. If we were greeted with indifference and suspicion closer to Mysuru, it was compassion, genuine concern for our welfare and an unexplainable warmth that awaited us farther off. From the mothering we received from innumerable women to the several glasses of buttermilk and lemon juice that we were offered, it was evident that people were more concerned about our walking in the hot sun than their own welfare.

While I had expected to see a lot of changes in the nearly dozen years between the two walks, I was not prepared for the problems that urbanization and industrialization were throwing up. It is one thing to talk about growing inequities but completely another to see it emerge in front of your eyes.  While laws can ensure that fair compensation is given for lands acquired for creating industries, one can never truly appreciate what structured jobs can do to a farmer and his family unused to the demands of an industrial working climate.

Several families could now speak of their sons or daughters being employed in the nearby factory and reaping the benefits of a stable income. What was unspoken were the pressures of balancing social tensions that were emerging within and between families. There were still several households dependent on the vagaries of nature and on income from agriculture that was available only after the annual harvest, and the contrast was stark.

The dance of inequities was not merely financial. A deeper socio-cultural divide was emerging. From the clothes that one wore to the food that one ate to the mobile phone one used, to the topic of conversation at the corner tea shop — everything seemed deeply influenced by the urban context and lifestyle.

What was evident was the consumerist pressures of urban living and its impact on the entire village. Whether it is the growing mounds of plastic, or the use of processed foods, or the shift in the levels and varieties of alcohol consumption, the emerging trends of urbanization and the shift of outlook from the ‘collective’ to the ‘individual’ were very stark.

The paradox was that much-touted urban amenities were never on the horizon. While the villages were dotted with RO filtration units supplying drinking water, we were privy to scenes of open defecation along more than 60 km of the roads we walked on. The claims of India now being open defecation-free are clearly miles away from the reality that we were witness to in villages as close as 20 km to Mysuru.

What greeted us as we set out each morning was the daily movement of people towards Mysuru looking for jobs — whether in the construction or housekeeping sectors. Despite current claims of skilling, we will have to come to terms with the fact that little or no investments were made in India’s villages over the past 20 to 30 years in preparing our youth for the jobs that exist today.

The reality of our economy being urban-centric and driven by STEM (Science, Technology, Engineering and Maths) education leaves only menial and janitorial jobs for India’s rural youth. Apart from the visible frustration, what is not spoken about is the growing numbers of people with consequential mental health issues. The powerful signals of aspiration and lifestyle that our urban existence throws up may be dazzling in the short term, but aspiration can lead to enormous frustration once you learn that your skills are inadequate and your dreams have no basis for fulfilment and you have to compete in a world for which you are not fully prepared.

While the experience of sharing and caring that we received still reflects the spirit of ‘Atithi devo bhava’ (Guest is God), one needs to be concerned over the gradual erosion of social bonding and social capital in India’s villages. While one cannot escape growing urbanization, what one needs to understand is that it is time for us to move away from our traditional views of villages and rural development.

Villages no longer fit the Gandhian dream of self-reliance nor is it any longer pragmatic in a highly networked economy dependent on urban production and consumption. It is also time to move away from the standard stereotype of viewing our villages as mere farmlands and seeing our rural brethren as people dependent on the largesse of the state or NGOs.

Government rural development programmes need to be redefined from a spatial approach and undertaken in the context of a gram panchayat as a unit of reference. More important, this walk helped us understand that rural development has to be contextually relevant and culturally appropriate for it to be truly meaningful and sustainable.