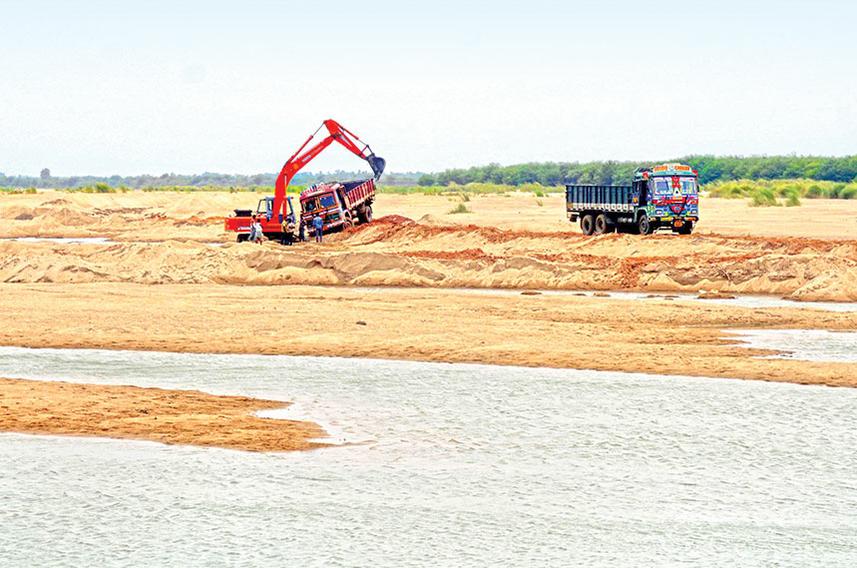 The illegal removal of sand from riverbeds and beachfronts has triggered debate on the many legal challenges of regulating a sector driven by cartels and mafias. On the one hand, there are reports of district administration officials taking action on illegal sand mining and facing threats or having been issued transfer notices. On the other hand, there have also emerged critical judicial directions that have pushed the need to ensure that sand mining is regulated for environmental impact.

Sand mining is practised the world over for riverbed management and is also used by local people for small-scale construction. However, for the past few decades, the removal of sand has increased manifold. The 2016 sand mining guidelines of the Ministry of Environment, Forests and Climate Change directly correlates the increased demand for sand with the requirement for cement by the construction sector. This should not come as a surprise given the tumultuous rise of the real estate sector in India over the past two decades.

Responding to the directions of the Supreme Court and the National Green Tribunal (NGT), the environment ministry finalised a regulatory framework for minor minerals that includes minerals like limestone and silica extracted from sand. This regulation also includes all mining activity even under five hectares which was otherwise out of the purview of the Environment Impact Assessment (EIA) notification, 2006, prior to the Supreme Court’s orders in 2012.

In December 2015, I discussed in this column the advantages and perils of what is being proposed. Since then, the law has been in place for about seven months, since 15 January 2016. We discuss what it really means:

The amendment to the EIA notification now divides the approval process for sand mining and mining of other minor minerals into individual and cluster categories. It further divides each of these categories into the approvals that will be required from the environment ministry in Delhi, the State Environment Impact Assessment Authority (SEIAA) or a newly constituted body at the district level called the District Level Environment Impact Assessment Authority (DEIAA).

The DEIAA is to be headed by the district magistrate. It needs to base its decision on an expert body called the District Environment Appraisal Committee (DEAC), to be chaired by an executive engineer of the irrigation department in the district.

So, for anyone interested in understanding how the environment approvals for sand mining and other minor minerals are now governed, here is the explanation.

All individual leases up to five hectares are considered to fall in the B2 category under the EIA notification. This means that these activities do not require an EIA report or a public hearing.  But they do need to seek permission from the DEIAA in collaboration with the DEAC. If the individual lease is above five hectares but up to 25 hectares, it still remains B2; only, the approval would need to be sought at the state level from the SEIAA.

The procedure has a minor difference when it comes to mining of sand or other minor minerals, if done through a cluster approach. While all other routes remain the same, the change is in case of leases, which are between five and 25 hectares that have no individual leases up to five hectares within them. This means, to be eligible for B2 status with no EIA and public hearing, the entire 25 hectares needs to be of one project proponent. It cannot be by a group that has come together as a cluster only for environment approval.

In either case, the permission has to be taken “before commencing any construction activity, or preparation of land, or mining at the site by the project proponent”.

What is interesting is that the new amendment now clearly spells out that the authorised members of the expert committees appraising applications for any environmental clearance at the national, state or district levels “may inspect any site connected with the project or activity in respect of which the prior environmental clearance is sought for the purpose of screening or scoping or appraisal with prior notice of at least seven days to the project proponent who shall provide necessary facilities for the inspection”.

While this does not make the site inspection mandatory, the very inclusion in the notification could drive home the point that a site inspection is good practice before a decision on whether a project is environmentally viable or not can be taken. It also helps authenticate the information provided in an impact assessment report and other documents related to project approvals.

The new regulatory framework also lists exemptions from environmental approval in 11 instances. For example, extraction of ordinary clay or sand manually by potters or earthen tile-makers is exempt. Removal of sand after flooding for agriculture purposes is also exempt.

The tricky inclusion is the customary extraction of sand and ordinary earth by gram panchayats for community work or personal use. There are reported instances across India where there has been collusion between the panchayats and the sand cartels. Even though the DEIAAs and SEIAAs have a role in monitoring compliance with this regulation, it would be extremely difficult to ensure which extraction is for community work and what is being siphoned off. This could become an enforcement challenge in the future.

A full list of the other exemptions can be found in the notification.

The true efficacy of this regulatory framework is still to be fully understood. The starting point is for people to know that it actually exists and that district collectors will be preparing a District Survey Report, which will be put out for public comments. The DEIAAs are at their formative stage, with the numbers not yet disclosed. Even as we track the impact environmental regulation of sand mining and minor minerals will have, the fact is that we now have regulation to reckon with.

The author is a researcher and writer.  Email: kanchikohli@gmail.com