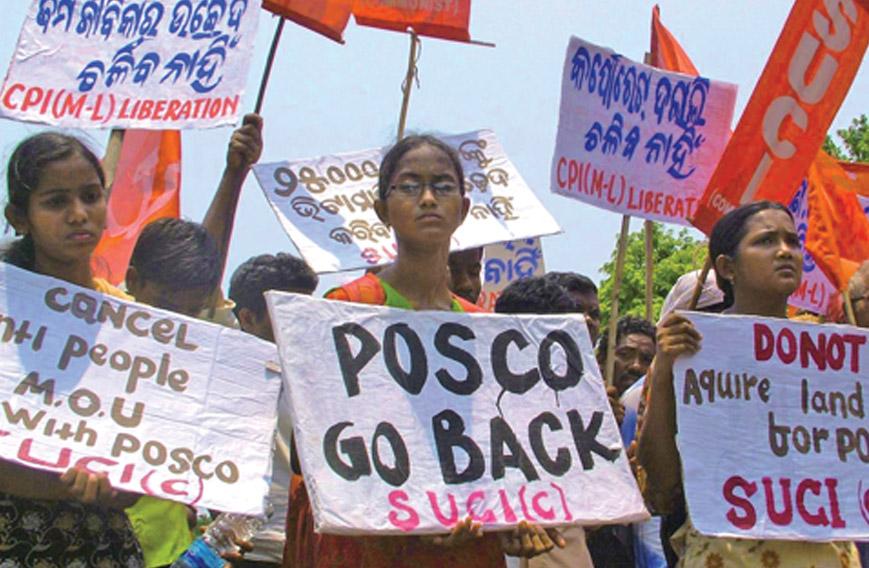 In 2005, I began following the POSCO (Pohang Steel Company) story closely. The legislation for setting up Special Economic Zones (SEZs) had been enacted the year before, and POSCO’s Memorandum of Understanding (MoU) with the government of Odisha was much in the news. It was lauded as the largest foreign direct investment in India and seen as a pet initiative not just of Odisha but also of the Prime Minister’s Office (PMO).

Much has transpired since then.  Two of the several components listed in the MoU have been mired in legal tangles and faced stiff resistance on the ground. At least three committees have intervened to examine lacunae in the Environment Impact Assessments (EIAs). The National Green Tribunal (NGT) has once sent back the environment clearance of the steel plant to the environment ministry for review and at another time restricted illegal tree felling in the area.

The first NGT order also directed that the impact assessment and project design be based on land optimised for a 4 MTPA project, rather than 12 MTPA as proposed in the MoU. While the environmental approvals sought were based on EIAs for a 4 MTPA plant, the company had been acquiring land in the area envisaging the construction of a plant with four times the capacity. It was not surprising given that the state government had assured that it would facilitate all approvals and keep the project area free of encumbrances. A close watch from the PMO’s office also perhaps gave the company the necessary confidence.

What did not go as per calculations for POSCO were two, amongst several other, events. First, the POSCO Pratirodh Sangram Samiti (PPSS) emerged as one of the strongest organised social movements in recent history. Even though the community in the project area was divided, the villages that were the backbone of PPS stood strong despite pressures, arrests and restrictions on basic amenities.

The second event was the procurement of the iron ore lease, both for use in the steel plant and for export. Studies of the economics of the plant carried out during 2008-10 had begun indicating that steel production was never the primary objective of POSCO’s investments in India. What they were eyeing was the mineral-rich Khandadhar area in Sundargarh district of Odisha. For this, POSCO had to contest against public sector companies such as Kudremukh Iron Ore Company Ltd (KIOCL) who were looking to seek mining leases in the same area. They competed both within and outside court for allocation of the mining lease.

For years, the company’s quest for iron ore close to 400 km from the site of the steel plant and port has not been realised. With the change of government at the centre in 2014, the once favourable office of the prime minister was no longer an ally. Moreover, the route for preferential leasing was replaced by an auctioning process through a revised mines and minerals regulatory law promulgated in early 2015.

By now POSCO was without a final forest clearance issued by the state government and its environment clearance faced a second challenge before the NGT after it had expired in 2012 and been extended in 2014 following a review process within the then Ministry of Environment and Forests (MoEF). The litigation on the latter had been dragging on from the very start when news started emerging that the company had begun withdrawing its operations from India. Almost no substantive hearings of merit took place, except those related to condoning the delay in filing the appeal.

Even as speculation continued and no formal announcement was in place, the counsel for POSCO mentioned before the NGT that the company was unlikely to utilise its environmental approval, which is under challenge and is due to expire in 2017. This was perhaps the first formal admission of the company’s inability to carry forward the project. Mind you, there is still no announcement of exit. Given this, and as the company requested, the NGT has disposed of the appeal challenging the environment clearance before it since 2014. The appellants have the liberty to approach the tribunal if the EC is revived or reissued.

As has been the case for the past few years now, groups like PPSS and other rights-based activists working with the affected people once again demanded a clear indication of whether the project would continue. People who had lost out on their betel leaf cultivation livelihoods have begun reoccupying the land once lost to POSCO. This is not without the company filing cases around trespass and encroachment. There is no talk of compensating the years of livelihood loss, whether the company exits or keeps its plans in abeyance.  Some villagers and activists associated with the resistance continue to serve jail terms.

On 28 April the in-principle approval to set up an SEZ granted to POSCO was also cancelled, based on an assessment that progress on the project is not satisfactory. News about the company seeking the intervention of the current PMO is now old and there is speculation that POSCO is unlikely to secure the mining lease even if it opts for the auction route. People living around the mine who have organised themselves as the Khandadhar Suraksha Sangram Samiti (KSSS) are looking to resist operations irrespective of whether it is POSCO or not.

Businesses and governments might well be drawing lessons from POSCO’s 11 years in India. But the rest of us need to as well. This is not only a story of a successful protest; nor is it just a tale of a sharply fought and well-researched litigation battle. From the regulatory point of view, POSCO’s experience has lessons on everything that should not be done while seeking environmental approvals. This includes breaking up project components, presenting shoddy impact assessments, acquiring more land than is required for the first phase, and  resorting to non-disclosure, among other things.

But once we are out of the legalese and the paperwork, this contemporary narrative has at heart real lives of real people who have lost their homes and livelihoods for 11 years or led a life of forced resistance for the same period. Even if the company formally announces withdrawal, who is going to be accountable for those lost years?

The author is a researcher and writer.  Email: kanchikohli@gmail.com