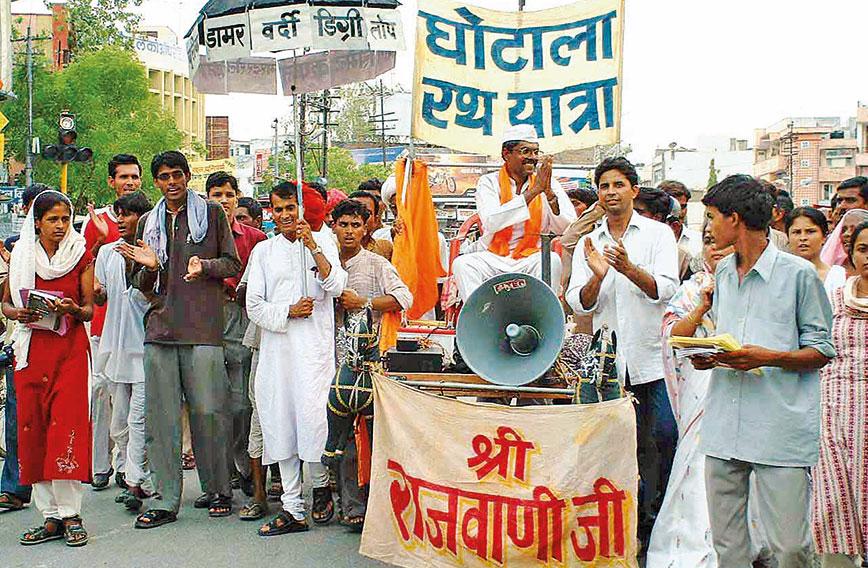 The iconic Ghotala Rath Yatra: There has been a growing awareness of citizens’ rights

Social campaigns have given voice to the weak 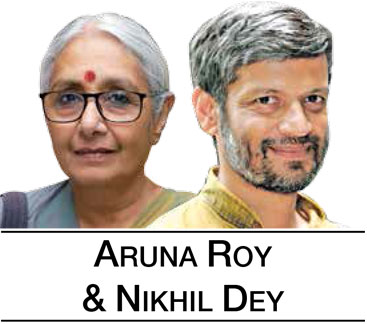 We are all citizens alike in our constitutional rights. There are categories which define us. But when categories swallow the human condition, it is time to stop and think. Civil society is one such classification that is perceived in very different ways. Those outside the State and market are generally recognized as part of civil society. This huge expanse of citizens, from the highly privileged elite to the emaciated silicosis patient, are all dumped in an arc of incompatibilities. It is a conglomerate of several groups of people with diverse and often contradictory interests.

For a long time, the Mazdoor Kisan Shakti Sangathan (MKSS), has patiently tried to inform the discourse that  marginalized people are seldom included under this definition. They remain, in many ways, the crux of Mahatma Gandhi’s ‘last man’ — the millions who have lived on the fringes of the basic necessities of life, as well as the people and communities fighting for justice for whom Babasaheb Ambedkar fought all his life.

In this scale of diminishing power, the marginalized and the less privileged have never quite been acknowledged as civil society, or even citizens with equal rights. By the nature of their economic and social marginalization, they are made politically invisible. Their participation and effective articulation as citizens have been incumbent on organizing themselves into collectives to be heard.

The social movements that emerged from their struggles and campaigns have focused on their voice being heard in both State and society, based on the constitutional values of equality, justice, and fraternity. The rights-based laws that were enacted in India between 2005 and 2014 are a narrative of assertion of these values which have contributed to making a more equal and just India.

Social movements have affirmed the democratic rights of all citizens. They have questioned the mainstream development paradigm that fosters inequality and plays havoc with our natural resource base. Their small and big victories over the years have been the result of a strong assertion of democratic citizenship.

They have incrementally strengthened the voice of the marginalized and given space to voices of dissent. The laws they have brought have evolved from robust processes of consultation and advocacy in the larger civil society. As a result, parliamentary platforms have been strengthened.

In the past two decades there has been considerable focus on the role of civil society. There is a realization that democratic participation does not end with the vote. Citizens can assert their rights to participation in governance and make interventions. While the privileged elites have resented this, movements have been questioning  non-participatory development policies and multiple kinds of inequalities. The Narmada Bachao Andolan (NBA) and the National Alliance of People’s Movements (NAPM), for instance, go back to Dr Ambedkar’s concerns about democracy addressing economic and social inequalities.

The authoritarian and unconstitutional developments in political power and governance were questioned by the JP movement. After the Emergency, the importance of public articulation and the freedom of expression became core values. Civil liberties emerged as an important issue of public concern and the People's Union for Civil Liberties (PUCL) was formed.

LAWS BY THE PEOPLE

The rights-based laws passed in India from 2004 to 2013, are the contribution of social movements and citizens groups to the legislative framework in process and content. They shifted priorities and engaged the attention of policy-makers, enabling a seminal shift in policymaking and legislation. They contributed to the creation of a system of engagement with democratic governance. These platforms enabled government, academics and specialists to sit with peoples’ organizations and design policy and legislations.

The law on the Right to Information (RTI) was shaped in an 11-year campaign during which lacunae in the proposals were intermittently dealt with. The basic legislation, drafted by the Press Council Chair, was discussed in several fora and critiqued.  Even the worst critics of the RTI and the other rights-based laws have had to acknowledge their efficacy. Equally important is the process through which this engagement led to framing policy with people’s campaigns and movements. There was also unprecedented political will during the UPA years to promote a participatory policy-making process.

There were three broad categories of rights-based legislations that were passed in this period. One set covered democratic and participatory rights such as  RTI, Lokpal, and the Whistleblowers Protection Act. The extraordinary success of RTI in empowering people led to the demand for more transparency and accountability measures. But it also made the government extremely wary about other legislations that might empower people to hold them to account. RTI marked a dramatic shift in not just access to information, but also access by citizens to their share of democratic entitlements and power. Today, about six to eight million people use the RTI law annually. Despite  amendments, it continues to be an important tool to demand disclosure from an opaque system. It strengthens the right to make informed choices.

The second category of legislations that created the economic and development rights of people were recognized first in the National Rural Employment Guarantee Programme. MGNREGA, as it was later called, was a legislation that overcame budgetary constraints to provide up to 100 days of work to any rural household, on demand. MGNREGA is not just the world’s largest employment programme — it is also designed so that people are empowered to access and secure their rights.  Subsequently, the Scheduled Tribes and Other Traditional Forest Dwellers (Recognition of Forest Rights) Act, 2006, the Street Vendors (Protection of Livelihood and Regulation of Street Vending) Act, 2014, the Right to Education Act, amongst others, were passed which recognized the rights of the systematically marginalized.

MGNREGA has provided work to some 290 million households for the year 2020-2021 till now. During the pandemic, had it not been for MGNREGA and the National Food Security Act (NFSA) there would have been a huge crisis with reverse migration, hunger and unemployment taking many lives.

The third category of legislations created welfare and equality rights for particularly marginalized communities. The NFSA took a step to guarantee access to affordable foodgrain to a large proportion of the population. The Workers’ Social Security Act, 2008, The Rights of Persons with Disabilities Act, 2016, The Protection of Women from Domestic Violence Act, 2005, the Scheduled Castes and the Scheduled Tribes (Prevention Of Atrocities) Amendment Act, 2015, all became a powerful means of strengthening equality and civil rights.

Such rights-based legislations helped correct the imbalance of power between the people and democratic institutions created for their welfare. The ‘right’ established the inviolability of the demand. These legislations made changes in a country notorious for poor implementation and feudalism. The rights-based framework was also accompanied by a democratic people-based framework for governance, including social audits to institutionalize peoples’ monitoring of social sector programmes and entitlements. The framework of social accountability is influenced by Ambedkar’s concept of social democracy.

This framework for law and policy, as defined by the Directive Principles of State Policy (DPSP) and demonstrated practically, introduced a new welfare and rights-based framework. The market and the corporate sector had occupied centrestage in policy-making and did not let go of their influence over the political economy, and, therefore, the democratic processes of governance. Today, the ideological battle between market forces and social movements are sharply visible across the legislative framework. Instead of the DPSP and its progressive framework setting the policy-making agenda, it is ‘economic growth’ and profits that have continued to increasingly influence the various arms of the State. That the rights-based legislations have survived, and even during the pandemic were the mainstay of the survival of millions of people, is a tribute to their efficacy. Even issues of health were framed in terms of the rights of citizens to equal access to public health, although the rights-based framework remains an unfinished agenda.

The rights-based legislations were a culmination of what progressive policy-making had envisaged in the six decades since India became an independent republic. They were, in fact, amongst the most significant paradigm shifts towards people-centric legislation since Independence within the framework of the Indian Constitution. They survived the onslaught of a ‘powerful’ government that is very antagonistic to ‘rights’ and wants to define them as doles. The  critique of  RTI, MGNREGA, NFSA and other such laws comes from those who jealously guard the system of policy-making.

The rule of law derives from the Constitution and no law or body can abrogate this basic framework. Freedom of expression is fundamental to all rights, including the right to live. It is also intrinsic to democracy. For people’s participation in the legislative framework, the most important expression is public action. This should be broadly defined through the written or spoken word, through collective protests or even individual dissent. The competing efforts to influence the policy-making sphere between market forces and peoples’ groups, are sharp and polarized.  The invisible undue influence of money and capital is getting more accentuated under an economic model that is dramatically increasing inequality. This brings entitlements for citizens and profits for companies into clear conflict.

With a series of rights-based legislations enacted in India, democracy seemed to have come of age. However, the next decade will show that it is a struggle between two world views. The rights-based legislations still offer citizens some space for public action and give an opportunity to engage with aspects of governance as well as question policy. The RTI, Land Acquisition amendments, the MGNREGA, etc. have been wounded by the assault on them, but will survive.

Influence of corporations over the arms of the State has also been steadily on the rise. This explains why civil disobedience, protests and dissent have been squashed. In contemporary India, civil movements and protests are either seen as coming in the way of ‘economic growth’ or condemned as anti-national, terrorist or seditious.  Activists are incarcerated. Basically, this is a fear of being questioned and a resistance to forfeiting the impunity that elites have enjoyed in many ways. Many of the amplifiers of the voices of mass mobilization by tribal or Dalit communities are in jail.

Power is never voluntarily shared. In contemporary India, the celebration of RTI, MGNREGA and other rights-based legislations, shaped by popular support, harbour hope for democracy. The nature of the resistance to the discriminatory CAA (Citizenship Amendment Act) and NRC (National Register of Citizens) laws, and the unjust farm laws, has also been a shining global example of democratic assertion within a constitutional framework.

Attacks on ‘civil society’ are an attempt to make it totally silent. Hope hangs by a thread with the indomitable creativity and resilience of ordinary people and the fact that we are, and will remain, argumentative Indians.

Aruna Roy and Nikhil Dey are social activists with the MKSS and NCPRI.