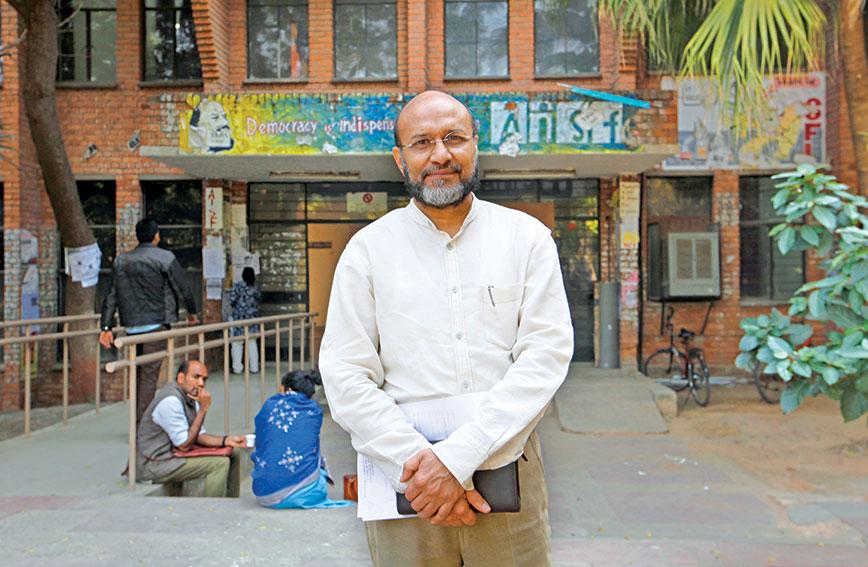 Prof. Santosh Mehrotra: ‘The government's job is to ensure a demand-driven skilling environment’

‘We face a serious shortage of skilled young people’

India has a growing number of young people ready to enter the workforce and if they can be given the education and skills they need for jobs away from agriculture, a significant opportunity presents itself for boosting economic growth and transforming the country.

The window for making the best of this demographic dividend is estimated to be till about the end of 2030 — or another 20 years. The possibilities are huge but to avail of them India needs to get its industrial policy and strategy in place and back it up with better healthcare, education and skilling programmes.

Post economic reforms several strides have been made. Millions have come out of poverty thanks to investments in infrastructure and the growth in services and manufacturing. There are more children in school and more of them are reaching the secondary level. Girls are getting an education and the total fertility rate is down. Health infrastructure has been expanded. There is also access and empowerment thanks to the Internet and mobile telephony.

What is questionable is the quality of these achievements. Much more needs to be done to meet aspirations and put in place the foundations of a modern and purposeful economy which will satisfy the hopes  of young people who are moving away from villages as part of a growing trend of urbanisation. These complexities are explained lucidly and comprehensively by Professor Santosh Mehrotra of the Centre for Informal  Sector and Labour Studies at Jawaharlal Nehru University, in his recent book, Realising the Demographic Dividend: Policies to Achieve Inclusive Growth in India.

Professor Mehrotra spoke to Civil Society at his home in New Delhi on why he has great hope for what can be achieved but is simultaneously deeply concerned that, in the absence of a sense of mission and purpose, a great opportunity to put India on the path of high and inclusive growth might be missed.

What are the immediate challenges in realising the demographic dividend?

The immediate challenge is of creating jobs in the non-agricultural sector. The demographic dividend can only be realised if people leave agriculture and get employed in industry and modern services, like banking, tourism, insurance, health, education…. That’s what the educated young would want.

We are currently adding five to seven million young people per annum to the job market. We aren’t adding 12 million per annum, a figure we keep hearing from the pink press, policymakers and academics. Everyone seems to be in a tizzy with the wrong numbers. This misconception arose because over a five-year period from 1999-2000 to 2004-05 we added 12 million people to the labour force. But never before 2000 and never since 2005.

So what is the figure you would go by?

We estimate that between 2004-5 and 2011-12 we added only two million per annum to the labour force, as opposed to 12 million in the first half of
the decade.

The numbers fell for a very good reason. By 2007 all our children between six and 11 were in primary school. We achieved a net enrolment ratio of 97 percent. Yes, 60 years too late but, thankfully, we arrived. That meant there was upward pressure on enrolment at upper primary school level so gross enrolment is probably between 90 and 100 percent. That created upward pressure at the secondary school level as well. The fantastic news is that between 2010 and 2015 there was a remarkable increase in the gross enrolment ratio in Classes 9 and 10. We went from 62 percent of gross enrolment of 15 and 16-year-olds in 2010 to 79 percent in 2015. It must have risen further which means four out of five children are in secondary school.

The rise in enrolment numbers generally, and especially at secondary level, has been driven by girls. There is gender parity at the secondary level which is a remarkable development in a country at our level of per capita income. It is phenomenally good news from a demographic dividend perspective.

There is direct correlation between the rise of schooling among girls and the decline in TFR. Girls are getting better educated, probably marrying later and hopefully looking for jobs outside agriculture. Let’s remember they aren’t going to work in agriculture like their mothers. They won’t even do home-based non-agricultural work their mothers did like making bidis and agarbatti, and zari-zardozi and so on. They will look for urban jobs in modern services or factory jobs. But that will happen only if jobs are growing.

Where are the jobs?

So let me start with the good news and then the bad news. My book deals with the fact that between 2004-05 and 2011-12 the rate of growth of non-agricultural jobs was 7.5 million per annum. Yet we were adding only two million people to the workforce. This implies that the open unemployment rate would have fallen and it did.

As a result, wages rose systematically in rural and urban areas for low-skilled workers, which is the reason poverty fell in absolute terms. The incidence of poverty, the share of the population below the poverty line (BPL), had been falling systematically from 1973 to 2004 and fell all the way up to 2011.

However, never in India’s history had there been an absolute decline in the numbers of poor people until 2004-5. The absolute numbers of the poor
fell from 406 million in 2004-5 to 268 million in 2011-12, a stupendous achievement for India, of Chinese proportions.

The economy grew at 8.4 percent per annum from 2003-04 until 2011-12. The increase in rural roads has been phenomenal. You can access most villages today on metalled roads, thanks to the Pradhan Mantri Grameen Sadak Yojana (PMGSY). In the 11th Five Year Plan from 2007-2012, the country invested $500 billion in infrastructure or $475 billion, to be precise, or $100 billion per year. That’s huge.

But what about the quality of this employment?

I am not claiming that the quality of employment was very good. However, why would the poor leave agricultural jobs if they didn’t think their earnings would be higher? Of course they were earning more. Between 2004-05 and 2011-12, 37 million people left agriculture, at the rate of five million per annum.

And the bad news?

The new government took some time to settle down. A lot of projects were stalled mainly due to MoEF (Ministry of Environment and Forests) approvals. By late 2015, investment in infrastructure began to rise again.

In his budget speech, Arun Jaitley claimed that the government is planning to spend `4 lakh crore or $57 billion on infrastructure this financial year. It is better than before but nowhere close to the $100 billion spend earlier.

What the government has done, with an eye on 2019, is to significantly increase investment in rural housing through the Pradhan Mantri Awas Yojana. Around a crore of houses are planned to be built between 2016 and 2019. Allocation for rural roads has also been increased. All this will generate jobs in rural areas for agricultural workers or for those leaving agriculture.

But will it generate jobs for five to seven million educated young people, looking for non-agricultural jobs and not construction jobs? That’s where the problem lies.

So we need higher productivity jobs?

Those jobs were growing in the earlier phase. Of the seven-and-a-half million per annum of additional non-agricultural jobs that were created between 2004-5 and 2011-12 only three-and-a-half million were in construction. The remaining were in services and manufacturing. True, those jobs were mostly in the unorganised sector. But the point is, they were fetching higher wages than those in rural areas, especially agriculture.

The educated young are mostly acquiring a general academic education. They are not getting vocationally trained. We still face a very serious shortage of quality skilled young people.

What do we need to do to match skills to jobs?

First, you need an industrial policy. The tragedy is, since 1991 we haven’t really had one. Contrast this with East Asia and China in an earlier stage of development. They were in mission mode, based on an industrial policy. After 1979, when economic reforms began in China, their Planning Commission, which still exists, became more powerful, not less.

What priorities would you set?

Second comes the quality of our human capital. In 1979, when economic reforms began in China, they had a relatively well-fed and healthy population. This is true of other East Asian and Southeast Asian countries as well. We still have malnutrition levels worse than Africa.

Certainly, IMR has fallen sharply and our public health system is more functional than 10 years ago. But we are still not spending enough on health.

Besides, those countries had a much better educated population. As per NSS (National Sample Survey) data, 23 percent of our 50 million workforce is illiterate, 26 percent has attended school till primary level or less. That accounts for half our workforce. An additional 16 percent has studied up to secondary level, say, till Class 8. So two-thirds of our workforce has less than middle-level education. Things are changing but this is the stock we have right now. The productivity of the workforce is correlated to education.

While more children are going to school, there are gaps. Teachers don’t always teach, children don’t learn, the quality of education is poor. How important are these considerations?

These are hugely important. Two problems need to be fixed to improve the quality of learning in government schools. One, our teachers must turn up to actually teach. The second is to improve the poor subject knowledge of our teachers.

Children must have an interest in continuing to be in school. We have to improve their learning capacity. We can do that by improving the nutritional levels of all children from 0-6 years and ensure that everyone in rural areas has a toilet and uses it. Between NFHS-3 and NFHS-4 the incidence of underweight children has fallen only from 43 percent to 35 percent.

It is critical that the Swacch Bharat Abhiyan does not fail. It should focus on behaviour change and not on building toilets.

Certainly, the government can give rural youth a chance to transit to urban jobs by locating skilling/vocational institutions closer to villages. The role of industry in financing such skilling institutions must become paramount. Government can incentivise that. Only industry knows the workforce it needs because they are going to employ them.

The government has created institutions like the National Skills Development Council (NSDC) which finances private vocational training providers who then skill young people for anywhere between 10 days to three to four months. We have just written a report for the Ministry of Skill Development and we told them to stop these short-term courses.

Young people joining these courses are half-educated. At best they have studied till Class 8 or 10. So what NSDC and private providers are doing is to skill half-educated young people and then expect them to get jobs in the organised sector. The evidence is that the employment rate of such courses is just 27 percent. The failures of the supply-driven system are now hitting the government. Hopefully there will be a course correction.

But industry has not shown much interest in getting involved in skilling programmes.

If industry does not come onboard, skilling programmes will be a non-starter. The demographic dividend, once gone, will never come back. The future of our children and the nation is at stake.

Making industry pay for skilling programmes will ensure there is no mismatch between supply and demand. It will ensure quantity and hopefully quality of the right order. Around 62 other countries are doing it this way.

The government can levy a tax on all registered enterprises of one to two percent on payroll costs. The money will go into a sectoral fund managed by industry and reimbursable. If companies train, they get reimbursed. This system can finance training of workers for small and medium enterprises as well, excluding the construction sector.