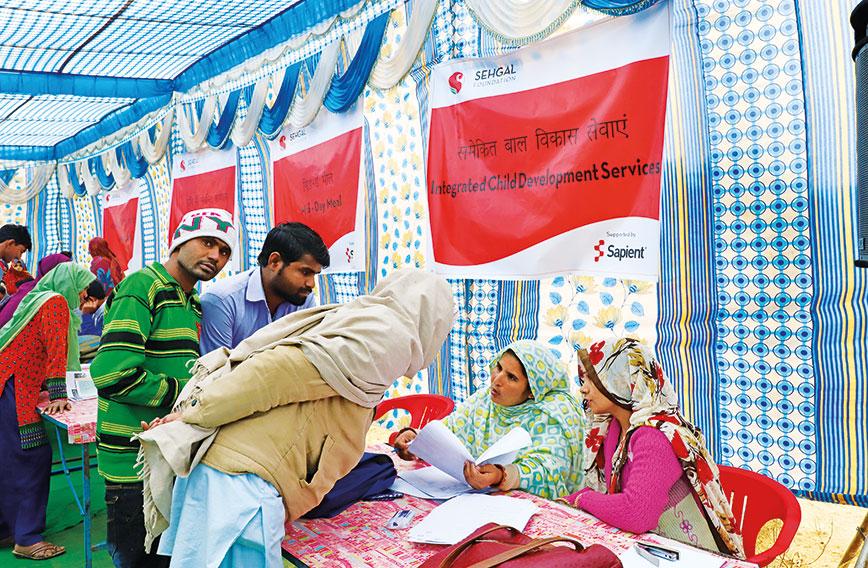 Villagers get grievance redressal under one roof

It’s a cold and foggy December morning. But this hasn’t dampened the enthusiasm of 35-year-old Nirmala and her 65-year-old mother-in-law, Resham. The two, along with 13 other women, hired a tempo from their village, Chundika, early in the morning and headed to Rangala, a neighbouring village in Tauru block of Nuh district, Haryana. As their tempo splutters to a halt in front of a brightly coloured shamiana, Nirmala tells the women to step out. She asks them to hold the papers they have brought safely in their hands. “Don’t lose them otherwise we will not be able to achieve what we have come for at the legal literacy camp,” she cautions them.

“We are all part of a Self-Help Group (SHG) and know that documents like the Aadhaar card, voter’s card and ration card are important. But we don’t know how these can be used to access government schemes. All of us have come to learn more about that,” explains Nirmala.

It is not just Nirmala and her group who are keen to know more about their rights and entitlements. By 11.30 am, the shamiana is packed with men and women jostling to queue in front of the eight information desks disseminating details of various government programmes related to pensions, ration cards, Integrated Child Development Services (ICDS), labour and agriculture. While some want to know how to fill in relevant forms to access services, others want to know why they are being denied services. Soon, more chairs have to be brought to accommodate the enthusiastic crowd.

“The huge number of people that have turned up is an indication that the government still has a lot to do to ensure its various schemes and entitlements reach the people,” says Vishal Singh, Chief Judicial Magistrate, District Legal Services Authority (DLSA).

This is where legal literacy camps are making the difference. In Nuh, the DLSA has teamed up with the Sehgal Foundation, a non-profit working on governance and advocacy, to connect the dots through such camps. The legal literacy camps are an integral part of the foundation’s Sushashan Abhi (Good Governance Now) strategy to empower rural communities to know their rights and entitlements and learn how to access services.

So far, 30 legal literacy camps, reaching out to over 39,000 residents, have been held in 25 villages in Nuh district since 2011. One of the reasons for choosing Nuh, earlier known as Mewat, was its literacy level. Compared to the state literacy level of 76.8 percent, the district’s literacy rate is only 54.1 percent. Female literacy in Haryana is 67.6 percent but in Nuh it is just 36.6 percent.

Each camp is, therefore, preceded by five days of mobilisation by the Sehgal Foundation’s field workers through door-to-door visits and public announcements to raise awareness about its objectives.

This was how Suman Devi, a resident of Rangala, heard about the camp. When she got to know that relevant forms would also be available, Suman knew this was her chance to solve her problem. Ever since she shifted from Bulandshahr in Uttar Pradesh to Rangala, her old ration card had become invalid. Buying rations in the open market was straining the family’s meagre resources. “After I was told that there would be a desk for problems related to ration cards, I felt relieved. If they have come to help us, why shouldn’t I take advantage?” she says. 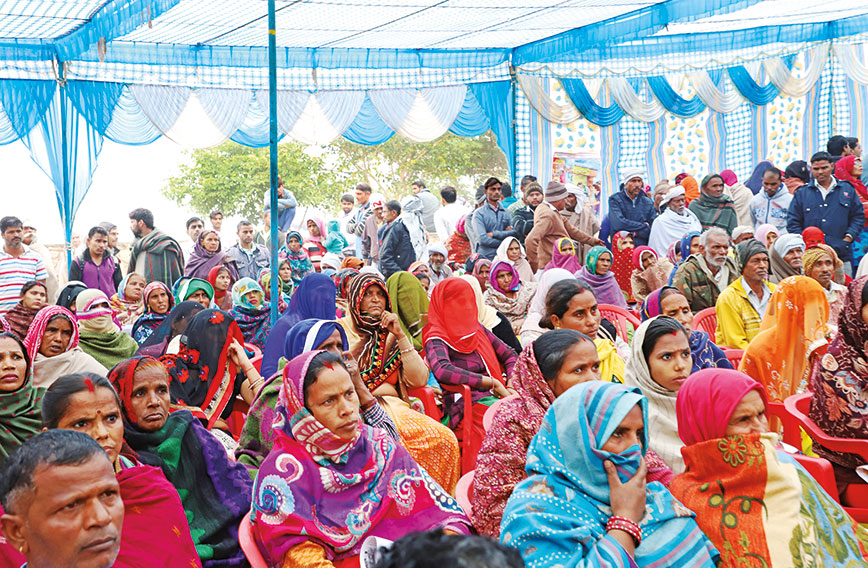 Many women came to find out about ration cards, pension schemes and farmer schemes

Although there is a queue, Suman waits patiently for her turn at the desk related to the government’s public distribution system (PDS). When her turn comes, she narrates her problem. “Since you have shifted to a new state, you will first have to get a certificate from your earlier depot validating that your ration card has been cancelled. This will have to be attached to a new ration card form along with photocopies of your Aadhaar card, the Aadhaar cards of your three children and proof of your address. Don’t worry, we will help you once you get the no-objection certificate,” says Sangeeta, a foundation staffer in charge of the desk.

Sangeeta also informs Suman that if she has any further queries she should get in touch with Prem, the foundation’s governance guide, after the camp. A governance guide since 2008, Prem’s job is to share information about various government schemes and entitlements and to handhold the community until they understand the processes and begin to participate in improving governance in their villages.

On hearing Prem’s name, Suman nods her head and smiles. “Now I know that my ration card will be made. Prem is known to all of us and she is always there to accompany us to the government offices,” says Suman.

It is no wonder that Prem’s cellphone is constantly ringing. Even at the camp, she is surrounded by people clamouring for her attention. Even in that melee, somehow R.G. Pandey manages to catch her eye. He has taken half a day off from work in a nearby office to accompany his widowed sister-in-law, Munni Devi, to the camp to find out how she can get a ration card. She has three children. He tells her that he has been given her phone number but is unsure whether Prem will remember him and
his problem.

“Don’t worry. My job is to look after all of you. I will come to your house and personally look into the case and ensure she understands the procedure and fills the forms. I will also make sure it is delivered to the right place,” says Prem.

The presence of an energetic sarpanch in Rangala has also made a big difference. Sarpanch Jaswant Singh has been an active partner in the foundation’s efforts to empower the community. “Being a lawyer, I understand legal matters. Such camps are a good way to improve knowledge, to voice grievances and to find solutions,” says Singh.

Geeta, a 45-year-old resident of Koikala village, agrees. She had attended a camp in 2016 in her village. A person with physical disability, Geeta wasn’t aware of her entitlements. Attending the camp had helped her to learn about her rights and to access financial help under the relevant government scheme. This is why she has come again to the Rangala camp. This time she wants to know the procedure to get pension for her 65-year-old husband. 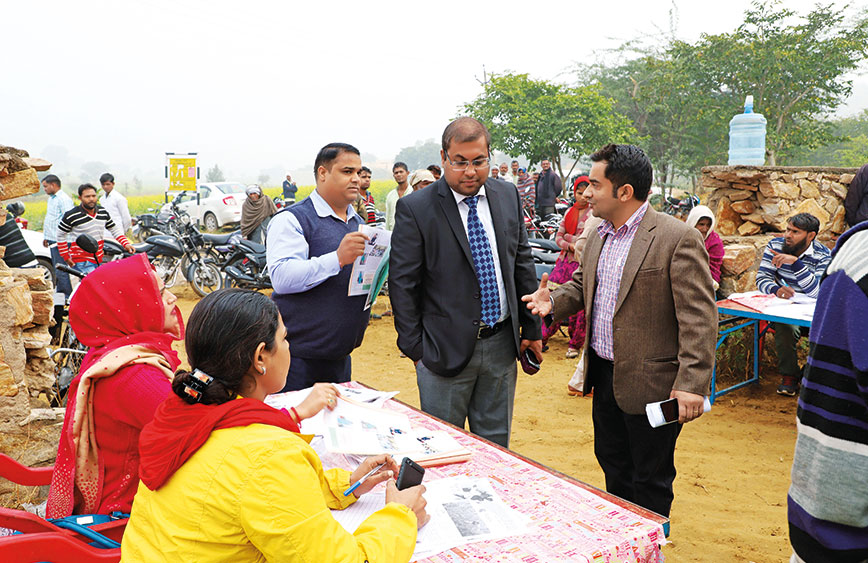 The success of such camps prompted the foundation to expand its Sushashan Abhi intervention. In 2014 it began Citizen Information and Support Centres (CISCs) and Village Leadership Schools to reach out to a larger number of rural communities not just in Haryana but in Alwar in Rajasthan and Samastipur in Bihar as well. While the CISCs are permanent information hubs located at the block level and run a toll-free number to help even those who may have missed the legal literacy camps, the leadership schools train selected articulate members of the community, women and men, while Sushashan Abhi champions motivate and inspire their communities to demand better governance.  Over 100,000 people have benefitted from the Sushashan Abhi initiative, according to Dr Vikas Jha, director, governance and policy advocacy, at the Sehgal Foundation.

However, some challenges still exist. While the introduction of technology has meant that forms can now be submitted online, thus reducing corruption, not all government officials have embraced it. Cases of harassment by bank officials who withhold loans on the pretext of incomplete documentation are rampant as are irregularities at ration depots and refusal by officials to redress grievances. Nevertheless, there is hope that with 13,000 Sushashan champions in Nuh, 800 in Alwar and 820 in Samastipur, the movement to empower communities with knowledge, skills, and confidence will help them overcome such obstacles.