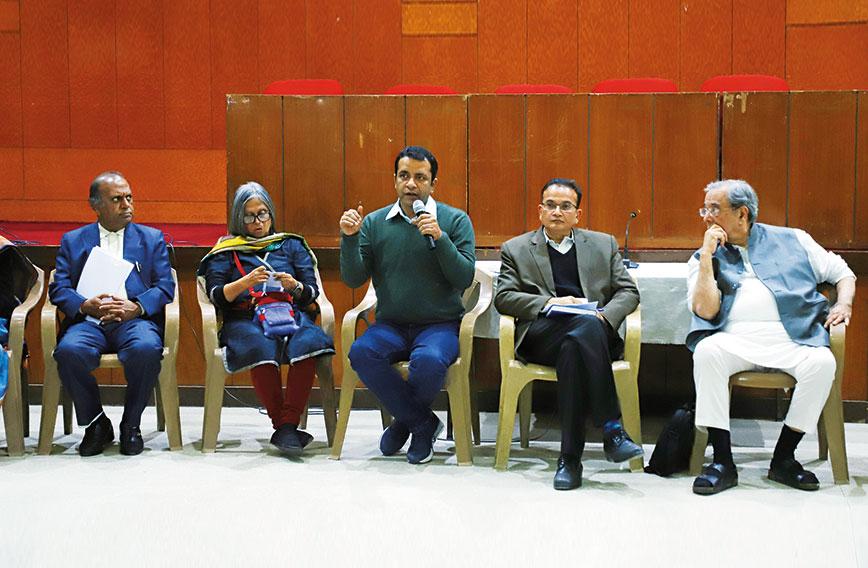 Representatives of non-profits at the meeting | Picture by Shrey Gupta

Non-profits will now have to undergo the process of registration every five years under changes proposed in the Finance Bill 2020. If they fail, for some reason, to register, they stand to lose tax exemptions that they have been so far entitled to.

Representatives of 100 non-profits met on February 13 at the Indian Social Institute in Delhi to discuss the implications of such changes in the Finance Bill 2020 and to Sections 12A, 12AA, 10(23C) and 80G of the Income Tax (IT) Act.

They were deeply upset. “The intent is clearly to stifle dissent and control the sector. Such regulations will enable those who conform to stay in business while those who don’t can close up and go home,” said Dr Amita Joseph, director of Business & Community Foundation who was one of the organizers of the meeting.

As it is, the Union government has been repeatedly changing the rules under which non-profits raise funds. The FCRA (Foreign Contribution (Regulation) Act) licences of 4,872 NGOs, including Greenpeace, were cancelled some years ago after they did not file their returns.

The immediate concern of non-profits is the question of registration. Under the new rules that come into effect on June 1, the registration of NGOs under various sections of the IT Act will be valid for a mere five years. They will then have to reapply for fresh registration. Not just that, they have to apply for re-registration within three months from June 1 when the Bill comes into effect.

This spells big trouble for NGOs that are already registered under Section 12A or 12AA of the IT Act under which they get tax exemptions. Under Section 80G, a tax-paying donor can claim tax deductions for donations to a registered non-profit.

Section 12A and Section 80G were clearly meant to encourage the growth of the development sector. But successive governments have viewed them with suspicion.

People at the meeting wondered whether a slow-moving bureaucracy would be able to handle the convoluted exercise of registration and re-registration efficiently and correctly. Or whether short-staffed smaller NGOs would be able to cope with the complex procedures involved.

“This year’s Budget is proposing very infeasible approaches. All three million NGOs are supposed to get re-registered within three months. Now there is no way the government can do that in three years, let alone three months. So basically what it means is that if you haven’t renewed your registration within that period the applicable validity of Sections 12A and 80G is gone,” says Dr Ashok Khosla, founder and chairman of Development Alternatives.

Should, for some reason, an NGO lose this validity, its assets become taxable at the rate of 30 percent of the market value. “I clearly see it as an attempt to muzzle the sector, to bring it into line,” says Khosla.

It is time for the NGO sector to shed its reactive mentality and take a more proactive approach to deal with such burning issues, said many of the participants.

Among the subjects that came up was the importance of collective work on building a positive narrative for NGOs, taking their concerns on the recent regulations to the finance minister, MPs and other stakeholders. This could be in the form of signed petitions which would be used individually and through NGO networks.

The importance of collecting data and evidence, and doing thorough research was also among the strategies discussed. “We will have to counter legal issues with evidence. It is not just a question of the finance ministry or documents. The larger issue of the survival of the sector is at stake,” says Anshu Gupta, founder-director of Goonj.

Ultimately, said Amitabh Behar, CEO of Oxfam India, the discussion proved productive. The question of framing a well thought-out response to the changes proposed, the presentation of the response, the need for advocacy and the need to rationalize the regulatory framework of the NGO sector elicited good responses from participants.

They also stressed the need to reach out to the media to get visibility for the sector and, finally, build a strong narrative that civil society is critical for India and Indian democracy and needs to be valued and nurtured.