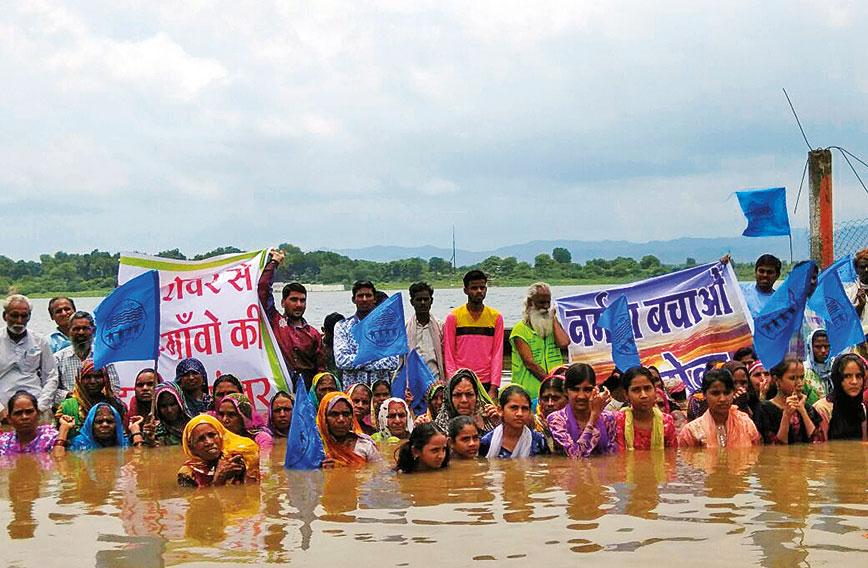 No logic behind dam mania

Vikas Gando Thayo Chhe" which means ‘development has gone mad’ is a super hit song these days in Gujarat. In the just concluded garba festival, this song was hugely popular throughout Gujarat. The song became popular even before Prime Minister Narendra Modi celebrated his birthday on 7 September by declaring completion of an incomplete Sardar Sarovar Project (SSP), heaping totally unnecessary, unjustified and unjust displacement on 40,000 families in the Narmada valley and killing the largest westward-flowing river of India. So much for the river rejuvenation claims his government has been making since May 2014. As if to complete the process, another dam has been started on the Narmada, a few kilometres downstream of the Sardar Sarovar Dam at Garudeshwar, without any Environmental Impact Assessment (EIA).

Downstream of the Sardar Sarovar Dam, 150 km of the Narmada river has been killed since no fresh water is flowing downstream in the non-monsoon months and this year even in the monsoon months. That stretch of river and the people on its banks are suffering salinity ingress, pollution, lack of freshwater, groundwater salinity, impact on fisheries and even on agriculture. Now, in the name of stopping that salinity ingress, the Prime Minister is to lay the foundation stone for yet another dam on the Narmada, the Bhadbhut Dam, to cost another Rs 4,000 crore. No wonder, the dam is hugely and publicly being opposed by the people of Gujarat, including over 10,000 fisherfolk families. Possibly it was this madness the people of Gujarat were celebrating this Navratri!

Days before the SSP function, in removing Uma Bharti as Union Water Resources Minister in early September and replacing her with Nitin Gadkari, the PM showed another sign of the dam fundamentalism of his government. The media almost unanimously declared Bharti a failure in the Water Resources Ministry. Her almost regular, weekly statements that the Ken-Betwa work would start soon could not be realised, nor was the Ganga in any better state than what she had inherited as minister.

Can we expect our rivers to be in any better shape or the state of our water resources to improve under the new minister? In his home state, Maharashtra, when a Rs 70,000-crore irrigation scam was exposed, the media had raised many questions about Gadkari writing to the UPA government, asking for release of money for contractors involved in corruption-ridden projects. It was interesting that after taking over the portfolio, Gadkari’s first stop was Maharashtra, to offer the chief minister Rs 55,000 crore for the same corruption-ridden irrigation projects in three years, claiming to increase the area irrigated in the state from the current 18.8 percent to 40 percent in two years — very unconvincing, to put it charitably.

Even as surface transport minister, his advocacy of using rivers for inland waterways did not consider the impact of the project on rivers or biodiversity or the livelihoods of millions dependent on rivers or many other aspects of river rejuvenation, the government’s declared priority. India’s rivers and water resources will need to wait a lot longer before they see achhe din, it seems.

While swami Sri Ravi Shankar, claiming to work for improvement of rivers, is still battling a case in the National Green Tribunal for destroying the Yamuna floodplain, we have a new one that asks people to send missed calls to improve the state of our rivers. Rally for Rivers, unfortunately, does not even start with a sound understanding of what is a river, what threats the rivers are facing and what condition they are in. Its 700-plus page draft policy recommendation submitted to the government seems to be written by people who do not understand either India’s water resources challenges or our rivers. But their leader, Jaggi Vasudev, seems to have the support of the government in power. He has no problems with dams or interlinking of rivers! He has been asking state governments for land along the rivers for establishing pilots of tree plantation. Seeing all this, Rajendra Singh of the Tarun Bharat Sangh, who earlier supported the rally, has turned into a critic.

But the Union government continues to push interlinking of rivers in general and the Ken-Betwa Project in particular. The Niti Aayog has also set up a committee to push big hydro in Northeast India, despite continued evidence that big hydro is no longer viable.

India is a power-surplus nation, and is likely to remain so for decades to come. With the cost of power from solar and wind-based projects coming down to `3 per unit or below, and when there are no takers of power beyond that price on power exchanges, with half the power on sale finding no takers, where is the question of the viability of large hydro? The cost of power from large hydro is more than Rs 6 at the most conservative level, and comes with all the attendant social and environmental impacts, risks, a long gestation period and cost and time over-runs.

But in the face of fundamentalism, logic does not work. So the 5040 MW Pancheshwar Project on the Kali river on the Indo-Nepal border is also being pushed — in a highly earthquake-prone, landslide-prone, flash flood-prone area, involving a dam much bigger than Tehri. It will cost over `50,000 crore, with Non Performing Asset writ large all over it. The EIA of the project by WAPCOS is as usual a shoddy piece of work, and public hearings involved massive violations in the presence of armed police. Our prime minister is going to Nepal in the second week of October, to lay the foundation stone of yet another dam — Arun 3 this time.

But we have better, non-dam options. The just concluded monsoon was far from normal for most of the country, even though the metereological department declared it normal. The dam the prime minister declared complete on his birthday could not even be filled. The monsoon again told us loud and clear: groundwater is the water lifeline of India and the only way to sustain it is to harvest rainwater where it falls. This can also actually help kickstart growth and pacify angry farmers all over India, among many other benefits. If only we were smart enough to see that. And smart enough to get a government that understands these realities.