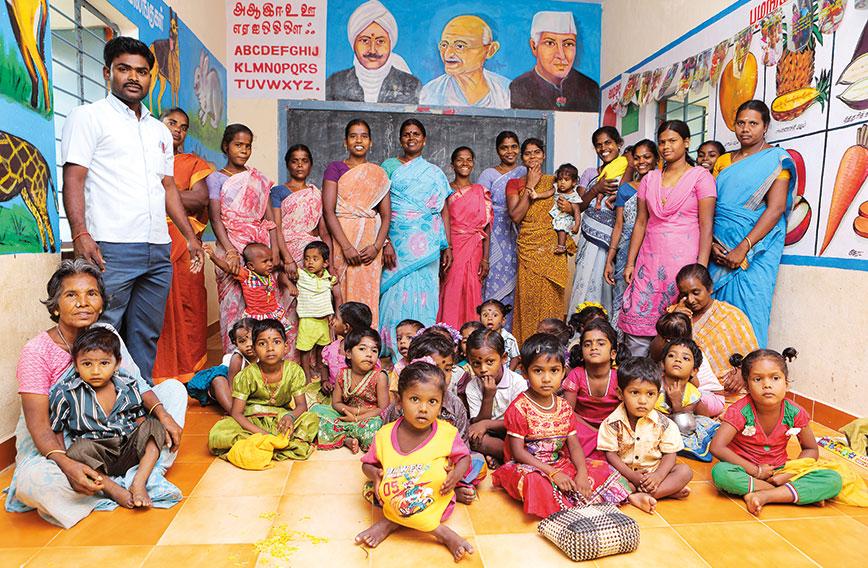 Where are the teachers for pre-school?

Nutrition and the health of children has been the main focus of anganwadi centres under the Integrated Child Development Services (ICDS). The recent National Education Policy (NEP) introduces pre-schooling from the age of three. Can the anganwadis provide quality pre-schooling?

Understanding and addressing the different kinds of challenges faced by the states of India is the key to ensuring that children are not only physically healthy and well-nourished, but are also ready for schooling.

The nutritional and health status of young children is a sensitive indicator of the overall well-being of society. A child born in a remote rural area or an urban slum does not have the same chance of survival as a child in a rich household. The picture varies across different states in India, across rural and urban areas, economic groups, social groups, gender and  household educational levels.

The National Sample Survey Office (NSSO) data report of 2018  reveals that the Age Specific Attendance Ratio (ASAR) was only 29.2 percent for children from three to five years. The reported children could either be attending pre-primary institutions (the ICDS) or pre-school — government and private). While the percentage was above 50 in Kerala, Punjab and Telangana, it was between 30 and 50 in Tamil Nadu, Andhra Pradesh, Haryana and West Bengal. The situation in most other states was closer to the national average. It is important to clarify that ICDS centres, catering to children aged 0-6 years, may be perceived as feeding centres and thus not reported as pre-school.

The data released by the Ministry of Women and Child Development in 2014 shows that across India only 37.9 percent of children 3-6 years old were enrolled in the ICDS’ anganwadi centres; 30.7 percent went to privately-run pre-schools and 26.9 percent were not enrolled or attending any centre. While social group differences are not marked, 51.4 percent of children from the lowest wealth quintile depended on the ICDS, and only 15.4 percent of those in a higher wealth quintile attended the ICDS. It is in this context that the recommendations of the National Education Policy (NEP) 2020 to include pre-primary in the first foundational cycle is important.

While malnourishment, undernourishment, stunting and wasting have rightly been the focus of attention of the ICDS programme, what is not always acknowledged is the critical role pre-school education plays in enabling children to successfully traverse schooling. Early stimulation through play-way methods are known to exert a positive influence on the ability of children to cope with schooling.

Since the mid-1970s the ICDS has not only been the largest provider of child nutrition and the focal point for immunization, but also for pre-school education. Successive surveys and studies have pointed out that while its immunization and nutrition functions are performed with some degree of seriousness, pre-school education has been the weakest aspect of the ICDS. The 2011 Census reported that out of 158.7 million children under six years, around 76.5 million (48 percent) were reported to be accessing the ICDS programme.

The remaining 30 to 40 million children did not access these services. This could include children from richer households and perhaps a fairly large number of the most marginalized who do not access any service. Among them would be seasonal and short-term migrants and the urban poor. What is, however, disturbing is that while the ICDS centres catered to 37 million children nationwide, “just over three million children attended pre-schools attached to government primary schools in 2014-2015. Close to 27 percent of children aged 3-6 years did not attend any pre-school facility, and just about 58 percent of those enrolled attended regularly” (Mobile Creches’ Report 2020).

The NEP introduces the concept of foundational literacy and numeracy — by clubbing children from three to eight years in the first of the four education cycles, namely, five years of pre-school and Classes 1 and 2; three years in Classes 3, 4 and 5; three years in Classes 6, 7 and 8 and finally four years of secondary education in Classes 9, 10, 11 and 12. Essentially, NEP 2020 makes pre-school education an integral part of the educational journey of children from the age of three.

What is the implication of this for the ICDS and for pre-school education in India?

The question that is often asked is whether the ICDS workers — known as anganwadi workers and helpers — have the time, aptitude and capability to conduct pre-school education alongside nutrition and immunization related work. It is important to remember that they are not only part-time workers but that they are paid just a small honorarium. They are also the focal point for all programmes for infants, children, pregnant and lactating mothers and adolescent girls. Adding pre-school education to their work chart has not worked everywhere. As  a result, pre-school education has remained the most neglected aspect of the ICDS.

Over the past 30 years I have personally seen the ineffectiveness of pre-school education in the ICDS centres in many states. In several studies from 2003 to 2019, I explored the factors that lead to successful primary school completion.

What I saw in rural areas and urban slums is that there are significant state-wise differences. The governments of the southern and some western states and, to some extent, Himachal Pradesh, showed great interest in making sure the ICDS programme worked well. However, in most of the more disadvantaged states in the heartland of India, the core tribal belt, northwest states and the eastern and northeastern states I did not see evidence of commitment by governments to ensure smooth and effective functioning of the programme. The most notable difference was the total absence of pre-school education in states that saw this purely as a feeding programme.

Those children who do not attend the ICDS centres but enrol in private pre-schools do not get the nutrition and healthcare they should. It is important to acknowledge that it is not only the rich and middle classes who avail of private pre-schools — in urban slums and larger villages even the poor avail of privately-run ‘play schools’ or NGO-run balwadis. The biggest conundrum since 1975 is that the various domains of child development are divided between the women and child development ministry/departments and the education department. Often, pre-school education falls through the cracks.

The differences across states is not confined to  the ICDS. One can see a similar pattern in elementary education. The Young Child Outcome Index, developed by Mobile Creches, reveals significant state-wide differences. The report, a must-read for anyone interested in the social sectors, argues that what India needs is “five policy enablers — to alleviate poverty, strengthen primary healthcare, improve education levels, augment safe water supply and promote gender equity….”

Coming back to the implications of the recommendations made in NEP 2020, administrators, child development workers, activists and researchers fear that pushing pre-school education onto the already overflowing plate of anganwadi workers may not give us the results we are seeking which is high quality pre-school education that stimulates cognitive development, encourages creativity and helps children grasp new ideas and concepts. Equally worrisome is the expectation that a proposed six-month refresher course will transform the anganwadi worker into a pre-school educator.

In most developed countries this aspect of education is perceived as being important and the training of pre-school teachers is rigorous and not a casual six-month module. There is, therefore, an urgent need to create a rigorous pre-school teacher education programme in accordance with the best national and international experiences.

To this end, the Government of India (GOI) needs to set up a high-level task-force to work out the details of how pre-school teachers will be trained and demand an additional education worker in the ICDS programme. Civil society organizations like Mobile Creches, the FOCUS  (Focus on Children Under Six) network, and the alliance of Montessori teachers need to be brought on board to design a two-year diploma or degree in pre-school education. Equally important is that these workers need to be paid as professionals and not as volunteer part-time workers.

The truth is that the anganwadi worker and helper cannot be transformed into pre-school educators. We need a new cadre with appropriate aptitude, grasp of the philosophy of pre-school education and the skills to deliver it in the school or the ICDS centre.

The NEP 2020’s vision of a robust pre-school programme for all children from three to six years cannot be realized without focusing on the pre-school teacher, her training and ongoing academic support.

It is equally important to ensure that children continue to receive immunization services, supplementary nutrition, health monitoring, regular de-worming and, wherever necessary, other supplements. In this pathway, state-wise variations need to be accommodated with context-specific design and priorities.

India’s civil society organizations have ample experience and can support state governments in this important endeavour. The GoI should reach out to experts/practitioners from different parts of India and create a high-powered working group that can develop a roadmap which can be adapted by the state governments.

Vimala Ramachandran is Director of the Educational Resource Unit, Jaipur and Delhi, a research and consulting group which she established in 1998.