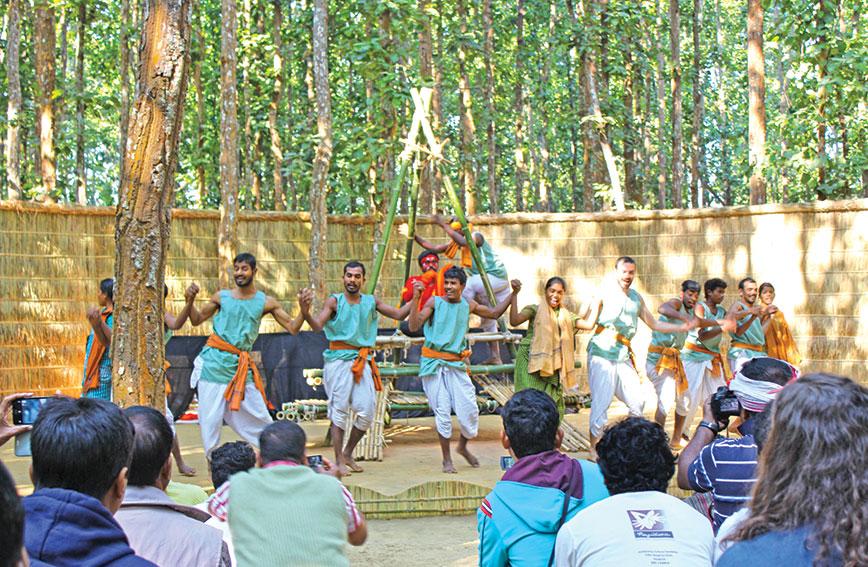 Theatre in the jungle attracts thousands

It is a nippy mid-December morning. A quiet forest in the middle of nowhere comes alive as the stage is set for a play to get underway. It is a sight to behold: a stream of unlikely theatre enthusiasts — men and women, young and old, villagers and small-towners — emerge from all directions and cram themselves into a clearing in the jungle. A temporary stage has been created here, under sal trees, entirely with locally sourced bamboo and hay.

It’s magical. One minute there isn’t a soul in sight, the very next the forest begins to buzz with activity and excitement. The spectators, mostly members of the Rabha community that inhabits this part of the world, come on foot, on bicycles, and on motorcycles. They quickly fill up the rows of planks that have been built in a semi-circular curve in front of the proscenium.

The occasion is the four-day Under the Sal Tree International Theatre Festival 2016, hosted by the Badungduppa Kalakendra of Rampur, Goalpara district, Lower Assam.

Rampur, a small hamlet off NH 37, which links Guwahati to Goalpara, a distance of about 150 km, no longer languishes in anonymity. The village is now on the to-do list of theatre gurus who believe that the medium is not just about performance and entertainment, but also about community engagement and empowerment.

Under the Sal Tree is the brainchild of Sukracharjya Rabha, a self-effacing, visionary theatre activist who has for long been employing performance art as a means for cultural change and social assertion in this once severely disturbed, remote rural outpost of Assam.

“In the initial days, the audience here would be foxed by the experimental theatre that they watched. But now they have developed a taste for it and know exactly what they are in for,” says Sukracharjya.

Sukracharjya, now in his early forties, was a student leader during and after the Assam agitation. He was at one point the Goalpara district president of the All-Assam Students’ Union (AASU). But disillusionment with politics drove him into the domain of theatre, which he now uses as an effective tool for positive change by pulling the Rabha populace into its fold.

He started directing plays in the late 1980s, addressing the many ills that plagued his society — alcoholism, deforestation, government corruption, lack of focus among the youth, the greed of the builders lobby and so on.  By the mid-1990s, he also made a name for himself as an actor.

In 1998, Sukracharjya set up the Badungduppa Kalakendra on a patch of land owned by his father. He named his theatre centre after a bamboo string-and-drum instrument that is an integral part of Rabha music. The very next year, at the Assam Natya Sammelan in Barpeta, Badungduppa staged a Rabha-language play for the first time.

The botany graduate from Goalpara College had witnessed how his village and its young people had suffered owing to the political unrest that rocked the state in the 1980s and its aftermath. He sees theatre as collective therapy for a scarred community. The one-of-a-kind theatre festival is the cornerstone of his palliative strategy.

Under the Sal Tree was born in 2008. It draws inspiration from nature and taps homegrown talent. This year, it went international. Held over 15-18 December, it had participants from Poland, South Korea, Brazil and Sri Lanka, besides troupes from West Bengal and Odisha. A performer from Poland, Wojciech Marek Kozak, and Brazilian actress Marilyn Nunes held the audience in thrall with rivetting solo acts.

Badungduppa Kalakendra, on its part, presented a Rabha-language version of William Shakespeare’s Macbeth, a spin-off from an adaptation by Kannada poet and playwright H.S. Shivaprakash, a longtime supporter of Under the Sal Tree. 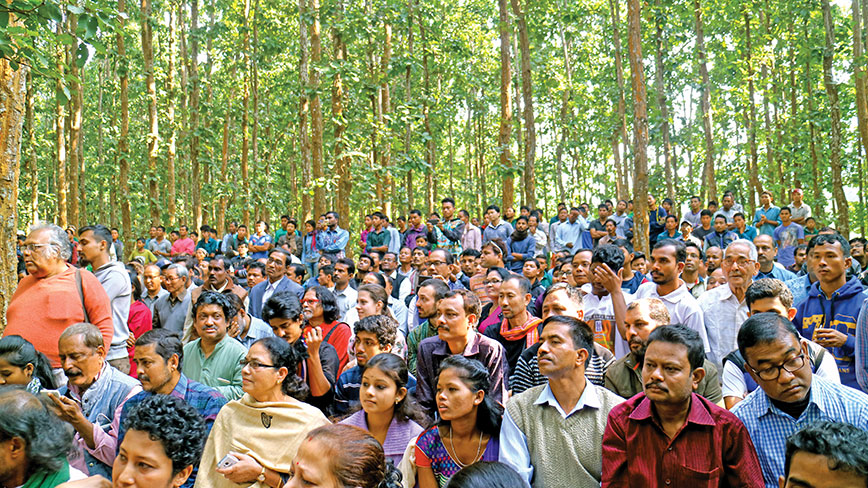 “When we started this festival, we had only three to four rows of seats. Today, at the seventh edition, we have 16,” says Sukracharjya. In 2008, Badungduppa Kalakendra erected tents on its premises for the visiting participants. “They did not blend with the surroundings and looked awful,” says Sukracharjya. In 2009, the second year of the festival, the tents were replaced by thatched structures that enhanced the beauty of the setting.

The evolution of Sukracharjya’s approach to theatre had begun a few years earlier. He developed new insights into his craft as an actor and director under the tutelage of the late Manipuri theatre doyen, Heisnam Kanhailal.

He had done a few National School of Drama workshops before he first met Kanhailal at a 2003 month-long theatre workshop organised in Guwahati by the Eastern Zonal Cultural Centre and Srimanta Sankardev Kalakshetra.

“He exposed me to experimental theatre and a new vocabulary of minimalist stagecraft and acting,” says Sukracharjya, who went on to spend two years at Kanhailal’s Manipur Kalakshetra.

Kanhailal passed away in early October in 2016 and the latest edition of Under the Sal Tree was dedicated to the theatre legend’s memory. 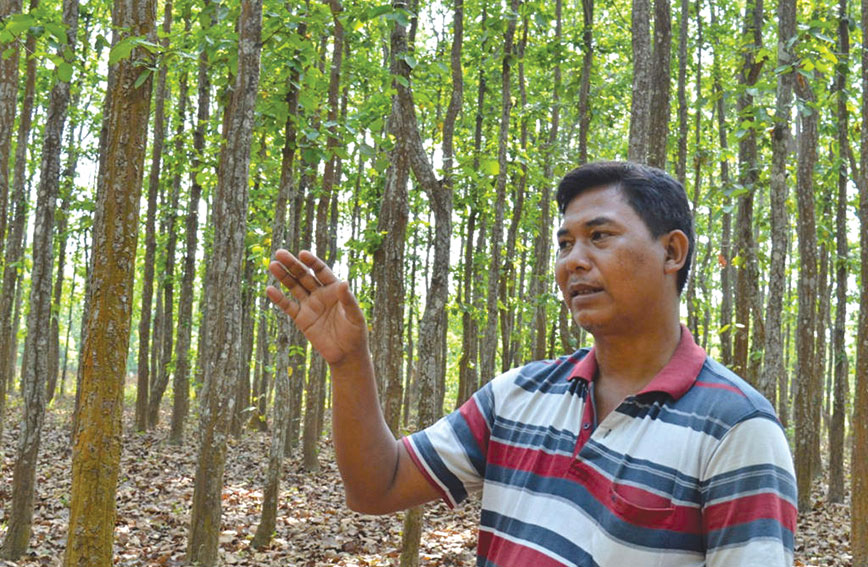 Sukracharjya Rabha, founder of Under the Sal Tree

Shivaprakash’s involvement with Under the Sal Tree goes all the way back to the festival’s very first edition. On that occasion, Badungduppa Kalakendra’s home production was a Rabha version of a folk tale that the Kannada writer and academic had dramatised.

The audience here is made up exclusively of local villagers and two plays are staged every day — one starting at 10 am, the other at 2.30 pm. The performances take place on a low, open-air proscenium stage. The festival does not use any kind of sound equipment so as not to harm the environment.

As South Korea’s Inhyun Song, in Rampur with a solo act, puts it: “The natural setting provides a great impetus. I could feel the spirit of the forest guide me as I performed.”

“This theatre festival demonstrates that it is possible to do an event of this nature without using microphones and speakers,” adds Song.

Sukracharjya also encourages all performers, even the visiting ones, to use the available natural backdrop and not insist on putting up black screens that interfere with the view the forest provides.

“Our idea is to promote dramaturgy that is flexible and free from elaborate props so that plays can be performed anywhere and everywhere,” says Sukracharjya.

“There was no tradition of daytime performances when we began and the audience here had no exposure to experimental theatre,” says Sukracharjya. “Things are now very different and the locals are amazingly receptive to plays of all kinds and in all languages.” Most performances at the festival now attract up to 15,000 people.

Subodh Pattnaik, whose Bhubaneswar-based school of people’s theatre,  Natya Chetana, has been successfully experimenting with participatory and roving theatre, says: “The audience here sets a great example. They are in their seats on time and they stay attentive to plays in languages that they do not understand.”

One important function of Under the Sal Tree is to spread awareness about the need to save the forest that yields what is regarded as the finest timber. Sal wood is known to be indestructible but unfortunately the forest is highly vulnerable as locals are increasingly going in for rubber plantations, which are usually ready for commercial exploitation in seven years. A sal tree, on the other hand, takes 20 to 25 years to yield wood.

Says Rampur village headman Hamar Singh Rabha: “Only sal trees that stand around our temples and cemeteries aren’t touched. They are regarded as sacred. Everything else is fair game.”

Amiya Rabha, a member of the audience from the nearby Kakuapara village, says at the end of a play: “The forest is sacred for the Rabhas. It has to be saved at all cost.” It is clear that the theatre festival is making a dent, however small.

Sukracharjya is a stickler for punctuality. He waits for nobody, not even VIPs, and every play in his festival begins right on the dot. “In the initial days, people who arrived late would miss parts of a play,” he says. “But now everybody arrives well in advance.”

Goalpara and the adjoining district of Kamrup are home to the Rabhas, who have a rich cultural and social heritage that has forever been under threat. Under the Sal Tree festival goes a long way in defining their identity.

Says Shivaprakash, who teaches at JNU’s School of Arts and Aesthetics, “The plays staged here are not only for entertainment, but also for community assertion.”

That, indeed, is the primary rationale behind Sukracharjya’s activities. Today, Badungduppa Kalakendra is a permanent space where, among other things, Sukracharjya and his band of committed theatre enthusiasts organise workshops for local children during the summer holidays and at other times.

In addition, Badungduppa has an 18-strong theatre repertory with nine floating members who come in as and when their services are required.

The Under the Sal Tree theatre festival may have taken firm roots, but its work is far from over. Nobody knows that better than Sukracharjya. “Sal trees produce fruit with wings,” he says. “When they fall off, they fly and land far and wide. New trees grow.” That is the way he wants his experiments in theatre to evolve.