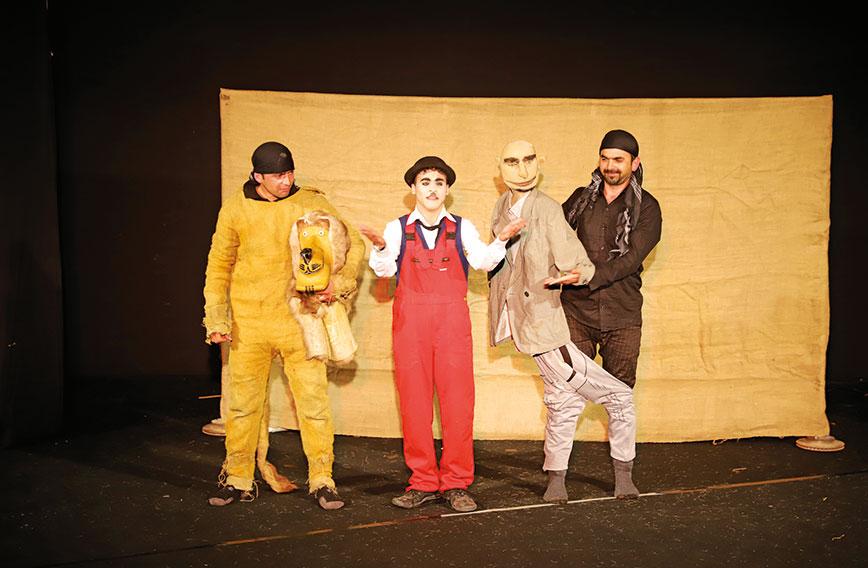 
The room is crowded with eager children waiting for the puppet show to begin. Onstage is Abdulhaq Haqjoo whose puppet plays the role of a zoo owner. He has a vacancy, he says. His zoo needs a zookeeper. Where are the resumes, he demands. Haqjoo’s voice is expressive and his audience is enthralled. The applicants line up. They are all children who have come with their own puppets to demonstrate their ability to run a zoo. But none makes the grade.

In walks Charlie Chaplin — he is an Afghan but has the trademark moustache, baggy pants, bowler hat and cane.  He eagerly hands over his resume to the zoo owner propped on Haqjoo’s hand. A brief conversation follows. Afghan Charlie Chaplin gets the job. He is now zookeeper for a range of animals. What follows is a series of rib-tickling adventures and gags as Afghan Charlie Chaplin goes about feeding the animals.

A synergy of theatre and puppetry, Afghan Charlie Chaplin brought the curtains down on the International Ishara Puppet Festival held at the India Habitat Centre in February . Puppeteers from Germany, the UK, Italy, Tunisia and Iran performed a variety of shows that were hilarious, moving, adventurous and socially uplifting. 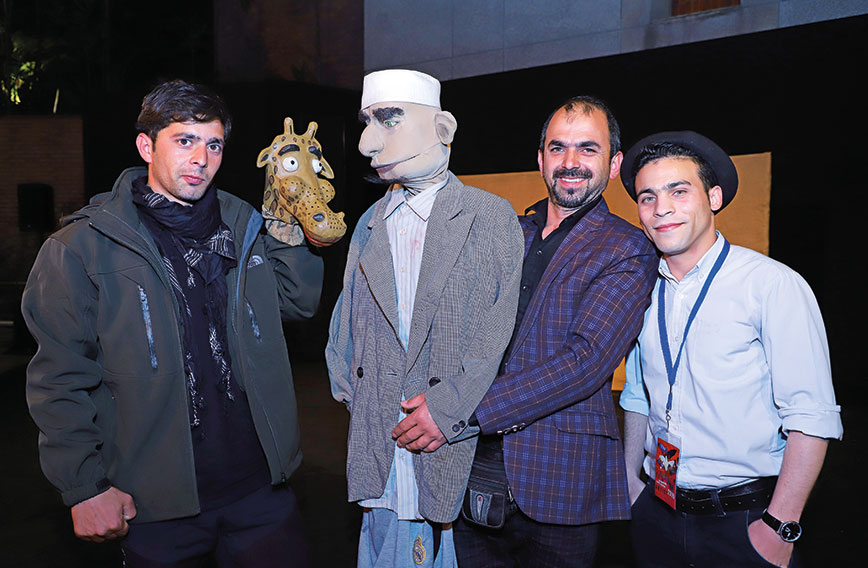 The creator of Afghan Charlie Chaplin, Haqjoo, is a professor of theatre at Kabul University. In 2007, Haqjoo, then a second-year student at the Faculty of Fine Arts in the university, attended a workshop on puppet-making in Berlin through a scholarship he received from the Goethe-Institut. Haqjoo’s dream was to work with puppets. While in Berlin, he applied to the Ernst Busch Academy of Dramatic Arts. He spent two weeks prepping for the exam by doing short pieces on object theatre, public speaking and drama, and was accepted. Only 11 out of 1,000 applicants generally make it.

Back in Kabul after his course, he continued to perform for adults and children, incorporating puppetry in theatre. He founded the Parwaz Puppet Theatre in 2009 and subsequently, the Parwana Cultural and Artistic Theatre, with which he tours various countries.

The role of Afghan Charlie Chaplin is performed by 25-year-old Karim Asir. “When I was a child, I had a motorbike accident and because of that I can’t keep my legs straight,” explains Asir. “I grew up watching Charlie Chaplin movies for fun but as I grew older I realised that he was also delivering powerful messages without using any language.”

Haqjoo recalls that when Asir first joined his theatre classes, he found it really frustrating to teach him. “I would teach students how to walk, how to be onstage and so on. With Karim Asir I had problems because of the way he walked.” In exasperation Haqjoo told Asir that he was just like Charlie Chaplin down to his hair, his mannerisms and his movements.

For Asir, this was a eureka moment. Here was his chance to embody his favourite actor. “When my teacher (Haqjoo) told me not to walk like Charlie Chaplin, I asked him if I really walked like him. It struck me I could use make-up, wear Charlie Chaplin clothes and see how I looked in the mirror. When I did this my classmates really appreciated it.” From then on, for the next two years, Asir immersed himself in studying everything related to Charlie Chaplin, his biography, his background and why he did what he did. 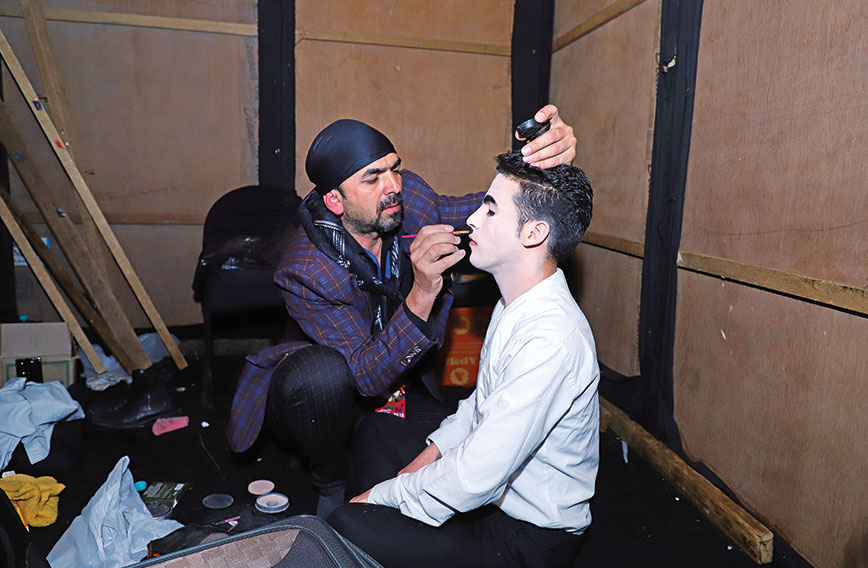 Early in his career Asir acted in small spots for a private television channel in Kabul, addressing social issues like littering on the streets. He now seriously began to learn how to act like Charlie Chaplin.

Performing in Afghanistan has not always been easy for the theatre group. Haqjoo narrates an incident, to illustrate the kind of situations they contend with. The mullahs of the Taliban came to one of his performances which had live music and asked him to shut it down. Haqjoo instead invited them to sit through the performance and if they found anything questionable, they could feel free to order him to shut it down.

“There were six mullahs and after five minutes of the performance they were laughing loudly. I was filming the show but whenever I aimed my camera at them they would assume straight faces,” says Haqjoo. “After the show they apologised to us. They said they had learnt a lot and not to stop what we were doing.”

Afghanistan has for decades been stereotyped globally as a country that is war-torn and miserable. But Haqjoo and Asir just want to make people laugh and draw their attention to some key social issues.

“I’ve been searching for a way to show people outside Afghanistan that art is alive in my country. The media portrays us as a country ravaged by war, but we do have art and theatre. One of my goals is to show the world that here is an Afghan guy who is ready to bring a smile to your face, make you laugh and forget about all your issues for a while,” says Asir with a  mischievous glint in his eye.

This is the second time the Parwana Cultural and Artistic Theatre is performing in India. They had come in 2016 but this is the first time they presented the Afghan Charlie Chaplin.

“People in Afghanistan are always thinking of war. I love to divert children’s thoughts from war to being happy, to laughing with each other and, most important, to being human and loving each other,” says Haqjoo. “For me the most important trait is humaneness. I tell all my students, if you aren’t a good human, your art doesn’t matter — it has no impact on society. Be a good human and you will be a good influence
on people.”

The Ishara Puppet Festival started in 2001 with a grant from the Ford Foundation. Initially, only puppeteers from India took part. Over the years it has evolved into an international festival. “Next year we are holding the festival from February 14 onwards and already a couple of groups have applied,” says Dadi Pudumjee, managing trustee.

Some of the countries which participate consistently highlight socially relevant issues. Iran, for example, has always brought performances relating to social change as well as war, peace, kindness and love. Others, like Parwana, bring shows that delight children.

Last year, the Ishara Puppet Theatre Trust started a five-month foundation course on puppetry. For three and a half months students are taught the intricacies of puppetry. After that, they intern either with a puppetry troupe or in schools for a month and a half. Gagan Kumar, a 23-year-old, has just completed the course and is looking forward to combining puppetry with pedagogy.