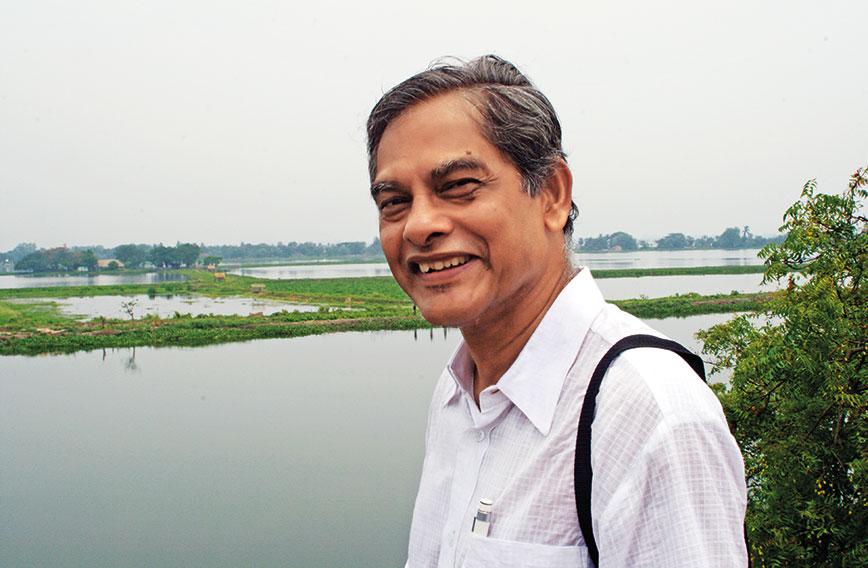 Dhrubajyoti Ghosh at the sewage-fed fisheries in 2008

In the many years that the Leftist parties governed West Bengal, they paid little attention to protection of the environment. It just wasn’t part of their paradigm for development. They also had no time for anyone who thought differently. In an old-fashioned way, they ran a closed administration and you had to be very brave to want to be out of step.

It was in such circumstances in the 1980’s that Dhrubajyoti Ghosh, then a mere civil engineer in the Public Works Department, discovered the garbage gardens and sewage-fed fisheries in the eastern fringes of Kolkata and then took it upon himself to seek their preservation because of the unique service they provided by recycling waste and giving it back as food.

By the early 1980’s, Kolkata had begun expanding rapidly. The eastern fringe, because of its proximity to the city’s core areas, held special attraction in terms of real estate. Already Salt Lake City had been built by filling up marshlands. A bypass to the airport had been constructed. What remained were the sewage-fed fisheries and garbage gardens and they were in danger of being grabbed and destroyed in the name of urbanisation.

It was Ghosh who singlehandedly staved off their destruction. He brought the world’s attention to the enormous ecological value of the recycling taking place.  When he passed away in his flat in Kolkata on 16 February at the age of 71, he had spent a lifetime immersed in this cause.

At the time he chanced upon them, the garbage gardens and sewage-fed fisheries had been working for 70 years or more. Sewage flowed to the villages through Kolkata’s sewer system which had been designed to slope eastwards in keeping with the city’s topography. Garbage was distributed to plots in villages in what was known as the Dhapa Square Mile under an agreement with the municipality.

Several traditional practices had evolved, which though undocumented, were perfectly scientific. Without any formal training, the villagers of the eastern fringe areas had provided a modern solution to the problem of sustainably processing urban waste. They were, in fact, ahead of the rest of the world.

It is interesting that Ghosh should have recognised this with his middle-class upbringing, conventional education as a civil engineer and his secure government job. There was no reason for him to see the eastern areas  as anything more than an extension of the city and mere real estate. But he did.

His exposure to the villagers and their practices seemed to help him discover the ecologist in himself. He explained it well in Ecosystem Management: Toward Merging Theory and Practice, which we at Civil Society published under our NIMBY Books imprint.

Ghosh says in his book that he found the villagers of east Kolkata had an altogether different worldview. While wastewater was seen by everyone as a “pollutant”, they saw it as a “nutrient”. Sewage, when kept standing in a shallow pond with the sun rays playing on it, produced algae on which fish could feed. 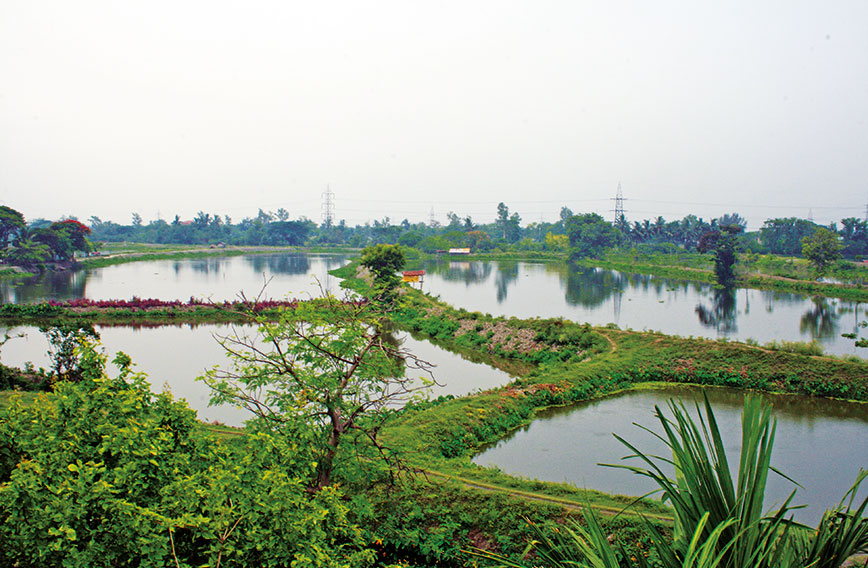 The pond also performed the functions of an efficient treatment plant. Water released after 20 days had qualities comparable to effluents from a treatment plant using the best-known technology.

Ghosh continued to serve in government while speaking up for the wetlands. He found his way around innumerable odds, developing allies  as he went along. He also earned a good doctorate.

He made a major contribution by mapping the unique ecosystem in the east in 1985 and giving it the name, 'East Calcutta Wetlands'. The name continues though Calcutta is now officially Kolkata. He also got the fisheries protected under the Ramsar Convention on Wetlands of International Importance.

But the wetlands remain under serious threat because of the absence of government rigour in preserving them. Ghosh’s final years were marked by disappointment. If the Leftist parties could not see the sense in saving the wetlands, the Trinamool Congress, which succeeded them, has done  no better. Fisheries get taken over and built upon with impunity.

I first met Dhrubajyoti in 1984 while I was hanging around in the State Planning Board in Kolkata in search of a story. It was a chance meeting and I took a lift in his Ambassador car. He mentioned the garbage gardens and sewage-fed fisheries and I said I wanted to go there.

He took me on innumerable visits and each was a magical experience as I learned about the fisheries and the growing of vegetables on garbage.  The system provided amazing insights into what sustainability can be for cities.

From being a source for innumerable stories, we forged a close  friendship that stretched over 30 years. The last time we visited the fisheries together was in 2008 when I wanted Lakshman and Rita to see the fisheries with him.

We turned that day spent together into a very popular cover story in Civil Society. (See Civil Society 2008: How to clean a river.)  By then he was much older and highly diabetic. But the passion in him hadn’t diminished.

We last spoke twice before his passing. He had been in hospital to be treated for pneumonia and a lung infection. He was back home, but he could hardly speak.

Dhrubajyoti Ghosh received many awards. But the one recognition he should have got was for the wetlands to be accepted nationally as a natural and scientific system of urban waste management. It never came.