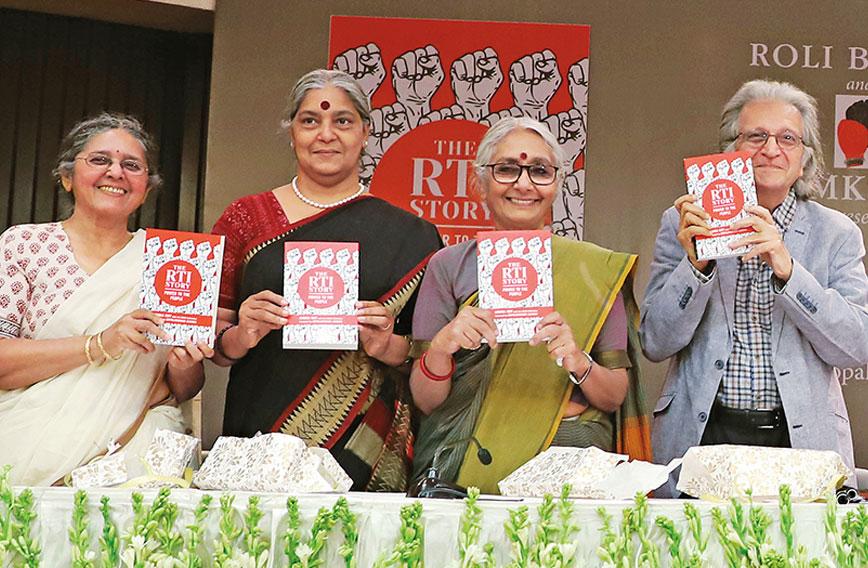 People’s movements represent multiple hopes and efforts. As they stretch over time, who did what and when or how something happened or didn’t gets forgotten. Chroniclers are needed, but hard to find. If they come from within it is most likely they won’t be objective and if they are on the outside chances are that empathy and understanding will be missing.

The right to information movement has happily overcome this challenge. Aruna Roy and the MKSS Collective have produced a balanced and well-documented book on the movement, which, after long years of struggle and many ups and downs, finally gave India a robust right to information law.

It hasn’t been an easy story to tell because the movement drew its strength from multiple efforts. But the book brings them together fluently and nicely, without the hiccups that could have come from hubris and self-praise.

Roy gives us an honest and professionally put together document. It is objective and dispassionately structured and allows us to access the movement in its many parts. The text is Roy’s but many shoulders have been put to the wheel. Roli Books, as could be expected, has done a great job in bringing it out.

The RTI movement’s story is inherently a dramatic one because people at the poorest and weakest levels of the economy experienced what it takes to hold powerful governments to account. That a law should have resulted from this unequal confrontation and found tens and thousands of users gives the RTI story the makings of a bestseller.

In 1987 Aruna Roy, Nikhil Dey, Shankar and his wife, Anshi, moved into a hut in Devdungri, an obscure village near Bhim in Rajasthan, to work for some of India’s poorest and most marginalised communities.  Roy had then resigned from the IAS, Dey had abandoned a college degree in America and Shankar, a local, had struggled his way to becoming a graduate. The village was mystified by their presence.

As they began fighting shoulder to shoulder with landless labour for their right to minimum wages, battling corrupt officials and the dregs of feudal power, people began gravitating to the hut in Devdungri and in 1990 was formed the Mazdoor Kisan Shakti Sangathan (MKSS).

Most of us know the RTI story piecemeal: the dharnas, hunger strikes, the catchy slogans and songs, the intense lobbying, the drafting of the law and the angst of getting it through Parliament.

“It isn’t about people in power. It is about people's power” said Roy at the book launch at the India International Centre in Delhi attended by many RTI stalwarts like Shekhar Singh, Wajahat Habibullah, Naurti Bai, Kuldip Nayar and Tripurari Sharma. The book launch was one of many launches, the first being at Chang Gate at Beawar in Rajasthan where an epic 40-day dharna by the MKSS began on 6 April 1996.

The RTI law was the first law that came from rural India’s landless labour, Scheduled Castes, marginal farmers and women. In every fight, the MKSS realised how critical it was to get access to information from the government to expose the truth.

In drought-prone Rajasthan, the poorest people relied on government-funded public works for sheer survival. Despite earnestly working in the scorching sun, workers would be paid less than half the minimum wage of Rs 11. Lower level functionaries  and overseers would tell a spate of lies. The money was pocketed. Unravelling this mesh of corruption meant looking at what officials had written in their reports.

Roy, Dey and Shankar didn’t think twice about diving into uncharted and risky terrain. They took on a feudal blustering landlord who terrorised the village with his goons. Once again it was government papers that revealed he didn’t own land he claimed as his own. Information was critical in finding out why no development reached villages — why schools remained ramshackle, or a panchayat ghar half-done or a road unfinished. On paper these were all described as being completed. The jan sunwai and the social audit evolved as a tool to expose corruption and it sent corrupt sarpanches running for cover.

The MKSS realised that a law on the right to information meant changing policy. They found friends among activist groups, journalists, sympathetic bureaucrats and finally Sonia Gandhi.

The draft of the law was discussed at meetings with NGOs and people’s movements before being presented to the National Advisory Council (NAC). Around 60 million people use it annually and there is a sense of ownership because it’s a law that has come from unsung heroes and not policy-makers.

“The book is a chronicle,” said Roy.  The MKSS maintained its records so a lot of material was gathered and put together. For those who attended,  the book launch was also a trip down memory lane as familiar slogans  like “Hamara paisa, hamara hisaab” were heard and songs of the movement were sung once again.

It was culture that connected people to the MKSS and all forms were carefully scripted, explained Tripurari Sharma of the National School of Drama who helped craft MKSS’ cultural outreach. Songs, theatre, slogans or Shankar’s famed puppets reflected what people were thinking, their deepest concerns.

The book is also a story of great courage and determination, often moving and peppered with wry humour even in dark situations. It reveals the wisdom of rural women. Naurti Bai, a key leader of the movement, didn’t know how to read and write yet she fought panchayat elections, became sarpanch of Harmada village, learned computers, ensured money was spent on development and got 12 bighas cleared for a cemetery for the Muslim community. And she continues to fight. She is the lead petitioner against a government order that bars those who haven’t passed Class 8 or can’t read and write from contesting for the post of sarpanch.

“RTI is a law that empowers people to monitor the government and not the other way around,” said Shekhar Singh, convener of the National Campaign for People’s Right to Information (NCPRI). Nepal and Bangladesh copied India’s RTI law but it hasn’t really taken off there because there isn’t any sense of ownership, he said.

Singh, an academician, said that while the law had been successfully and widely used, the book would have done well to document the weaknesses that have also manifested themselves over time. The appellate system, for instance, does not deliver and appeals don’t go through easily.

But laws are not written in stone and the RTI Act will see changes — some for the better and some for the worse. Nevertheless, it set a precedent and was followed with other laws which addressed the concerns of marginalised people in rural India like the employment guarantee law, the law on food security and the law on rehabilitation and resettlement of people impacted by projects.