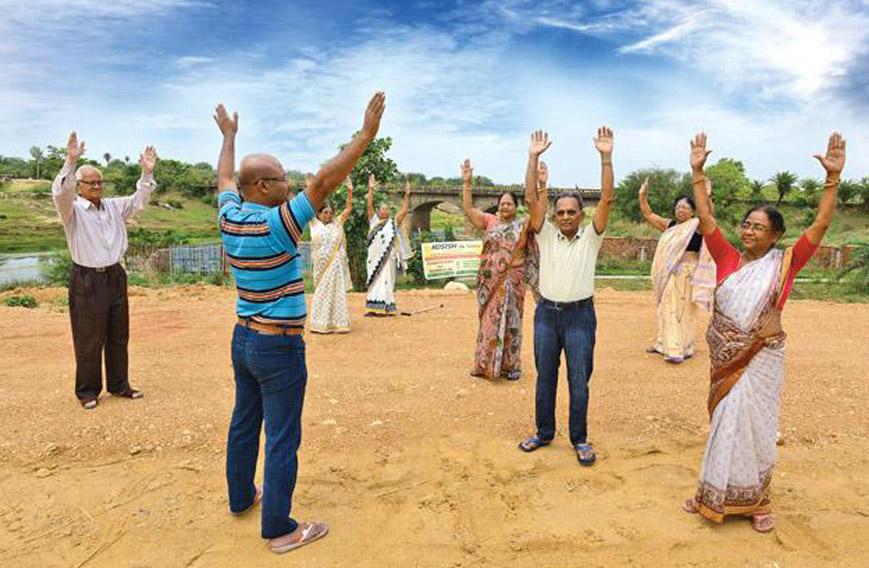 Recently I had a chat with Professor Masahiro Fujiwara, President of a Japanese Foundation celebrating its 100th anniversary. He said that Japan’s population consists of more than 30 per cent of the elderly and hence has adopted many schemes to cope with this demographic explosion. He said, “India is a young  country and unless you prepare now itself you will be swamped by the grey tsunami.”  Prophetic words indeed.

Increasing life expectancy and an increasing number of older persons is becoming the norm today. The fastest growing aged segment in many countries is the 80-plus group. HelpAge India in its report, “State of Elderly 2014”, has indicated that in the last decade the 80-plus group had grown by 500 per cent. In the 75-year period between 1950 and 2025, the average life expectancy for all people is likely to double while the birth rate is set to be halved. By 2025 grandparents will outnumber babies by two to one!

If India has to emerge unscathed from this future grey tsunami it has to begin work right now on its public policy  and correct many of its social ills. A national policy for older persons announced in 1999 is still  to be fully implemented.  The new NDA government has launched  the Atal Pension Yojana that provides a pension of `5,000 a month, depending on the contribution. Pension is very crucial for the future debate and in all probability this may be the very last measure to be implemented for lack of priority for the old. Look at our retired jawans fighting for “one rank one pension”.

When family care is failing, community care is very much needed. Take, for example, Kerala where the ageing population is much higher than the rest of the country. No one is prepared to take care of the elderly, especially the dying ones. In Kerala, thanks to rampant migration, there are very few children left to look after their parents. In desperation, the government has initiated community care through palliative centres. Sadly, this is the plight of old people  in one of the most developed states in the country.

Old age is not synonymous with disability, but frailty and disability are part of ageing. It is estimated that a minimum of five per cent of the total elderly population in the country suffers from one or the other disability — vision, hearing or mental. Since many are living in abject or relative poverty, it is essential to provide them some technical aids and devices so that they are not neglected and isolated. Though Union Finance Minister Arun Jaitley has allocated `200 crore for disability aids and assistive devices in the last Budget, the scheme is yet to take off.

The Union Ministry of Social Justice and Empowerment constituted a National Council for Older Persons in May 1999. The policy stipulates that state governments will take affirmative action to provide facilities, concessions and relief to senior citizens for improving their quality of life and to ensure that the existing public services are user- friendly and sensitive to older persons. The goal is the overall well-being of older persons. It aims to strengthen their legitimate place in society and help older persons to live the last phase of their lives with purpose, dignity and peace. Special attention will be necessary for women so that they do not become victims of triple neglect and discrimination on account of gender, widowhood and age.

The policy views the life cycle as a continuum, of which the post-60 phase of life is an integral part. It considers 60+ as a phase when the individual should have the choices and the opportunities to lead an active, creative, productive and satisfying life. An important thrust is therefore on active and productive involvement of older persons and not just their care. The policy recognises that older persons, too, are a resource. They render useful services to the family and outside. They are not just consumers of goods and services but also their producers. Opportunities and facilities need to be provided so that they can continue to contribute more effectively to the family, the community and society.

The policy firmly believes in the empowerment of older persons so that they can acquire better control over their lives and participate in decision-making on matters which affect them as well as on other issues as equal partners in the development process. The decision-making process will seek to involve them to a much larger extent, especially since they constitute 12 per cent of the electorate, a proportion which will rise in the coming years.

The policy recognises that larger budgetary allocations from the states will be needed with special attention to the rural and urban poor. However, it is neither feasible nor desirable for the states alone to attain the objectives of the national policy. Individuals, families, communities and institutions of civil society have to join hands as partners.

According to the policy, voluntary groups will be encouraged and assisted to organise services such as day-care, multi-service citizen centres, reach-out services, supply of disability-related aids and appliances, assistance to old persons to learn to use them, short-term stay services and friendly home visits by social workers. Going by its implementation this year, 90 per cent of the policy is yet to be implemented. Moreover, there is very little budgetary support.

Japan has a scheme called ‘Kaijo ‘ which provides old age insurance for all illnesses, frailty and disability and a continuum of care supported by the state. Japan also has many assisted living homes in many areas for the old. There is much to learn from them. We can adopt and implement some of their practices. The land of the Rising Sun is likely to be our hope!