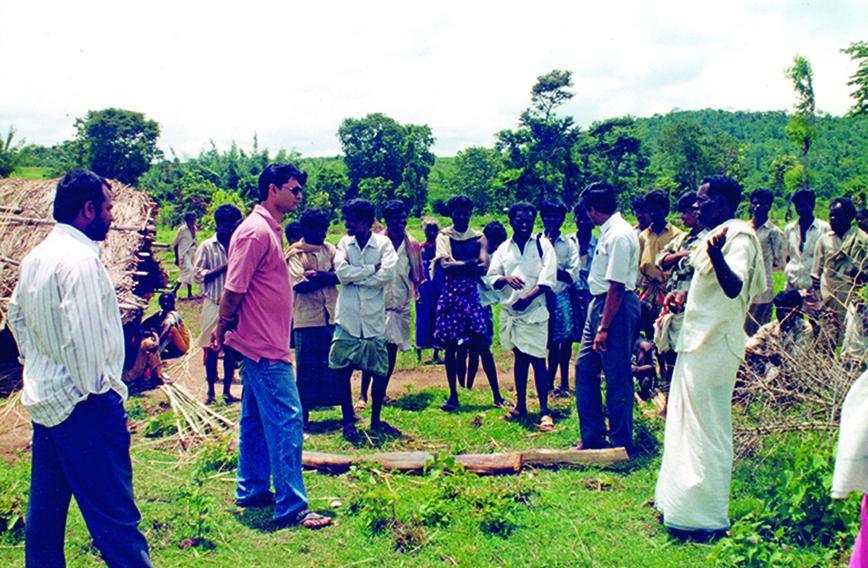 Tribals and officials finally meet thanks to media coverage

How a story on tribals finally reached the PM

It was 1999 and the air was filled with the tension of uncertainty. I was sitting with more than 50 tribal leaders on the bank of the Kabini river discussing what our next move should be. The past few years had seen us battle it out with the local forest department and the Karnataka government, demanding proper rehabilitation post formation of the Bandipur National Park and the construction of the Kabini dam. The dam was built in the Sixties and the declaration of intent for forming the National Park was issued in the early Seventies.

We had petitioned the National Human Rights Commission (NHRC) in the Nineties about the rights of the indigenous communities being violated by these events and the government not having undertaken any rehabilitation for loss of their land, livelihood and habitat. The fight had been long, arduous and not yielding the desired results. The revenue and the forest departments seemed to be at loggerheads with each other. The voice of the tribals amidst all this was getting drowned. Frustration among the tribal communities was rising and some of the younger leaders were advocating a more strident approach as we had hit a seemingly unsurmountable roadblock. The forest department was unwilling to part with the land identified for resettlement, while the tribals were unwilling to translocate once more without adequate guarantees and protection. The state and central governments had differing views on the release of land for rehabilitation and it looked as if we were running out of options unless the highest office of the land intervened.

But then, how does one get to be seen and heard, especially at such levels? I was still a young man whose only resource seemed to be passion, perseverance and a deep desire to fight the injustice meted out to the tribals.  Unsure of how to proceed, I approached a sympathetic bureaucrat whose batchmate was the joint secretary in the Prime Minister’s Office and had then Prime Minister Vajpayee’s ears. It was that kind soul who explained to me that the PM had a soft corner for marginalized people, especially tribals. He let me know that the PM would start his day only after reading his preferred newspapers and he only read a couple of newsmagazines. He asked if I could get the plight of these tribals written about in these newspapers and magazines. This, he said, was the best way to ensure that the PM got to understand the situation and start the ball rolling for the solutions that could potentially emerge.

If reaching the PM was considered near impossible, I presumed that reaching out to compassionate journalists and editors who believed in our cause would be the next challenge. But I was surprised by the support and response that I received from them. These were not armchair journalists pretending to be interested in development issues. They turned out to be serious people who wanted to get their feet dirty and come down and spend time with the affected people themselves. What resulted were insightful articles capturing the decade-long struggle and the knotted responses of the system. The articles did not stop there. They also offered solution frameworks one could consider, provided the different arms of the government aligned themselves. And this is what the PM read and appreciated. I was reached out to and magically the solutions started to flower.

The then chief minister of Karnataka, S.M. Krishna, convened a special cabinet meeting that was held in our tribal school with all the tribal chieftains attending it. All pending differences were ironed out. The next year saw a complicated and lengthy struggle end in a people-driven rehabilitation plan that is a standing testimony to what media advocacy can achieve when it is coupled with compassionate political leadership at both national and state levels.

Fast-forwarding to the current times, one is saddened to see the shifting editorial outlooks and media priorities. The recent migrant crisis that emerged after the lockdown seemed to get far less media attention than the continued 24/7 coverage of the death of a movie star. The pros and cons of the amendment to labour legislation brought in by several states get less newspaper space than our movie stars and politicians testing positive for COVID. Is this shifting priority a product of the changed ecosystem or is it just driven by market forces? Is there a combination of factors that has now resulted in a reduced appetite for development news?

While one cannot have a single-size-fits-all answer, I feel that one needs to take a helicopter view of the current situation to understand this issue more deeply. Societal priorities have changed post the 90s. Increasing consumerism, enhanced access to credit, growing markets and higher purchasing power have shifted how one reacts to issues of poverty and development. While activism is also seeing a downward trend, it seems to be revolving around political narratives rather than serious social or developmental issues. The country is also seeing a growing polarization ­— whether it is driven by differing ideas or ideologies, by political inclinations or religion, and dialogue is no longer the norm. It is more about the loudest voice capturing newspaper headlines and prime time TV debates. With this lack of substance, the common man is inclined to lose interest or become fatigued by everything that seems to be aimlessly going on around him.

Due to survival pressures and the growing fear of how the regulatory ecosystem will view their advocacy, NGOs too are limiting their media expressions to tokenism nowadays. Added to this is the corporatization of media houses where the bottomline is no longer driven by societal change but by balance sheet pressures. The shift of people’s preferences to other channels of communication — blogs, WhatsApp, online news, Twitter, YouTube, and so on — has caused both an overload of information and a reduced interest in people. It is also a double-edged sword, making it difficult to separate the ‘real’ from the ‘fake’, and a generalized cynicism seems to be creeping in.

Television journalism’s obsession with TRPs has further reduced the visibility of non-sensational development news.  Moreover, human development is a long-drawn generational process and has several players with differing perspectives engaging in it. It has neither the glamour nor the drama that can attract eyeballs and garner advertisement revenues. The short-term attention of people today demands a ‘product’ rather than a ‘process’ which is an added challenge for development journalism. Understanding development is a cerebral exercise while people seek short entertainment value items that they can relate to. It is only understandable that the audience and its appetite for development news is shrinking and one now needs to compete with a media that seems to be catering to people’s demands and market choices.

What options, then, does an NGO have in today’s world? I feel that there are several. These are exciting times for an NGO to communicate its views and ideas more easily and at far less cost than ever before. This is a world where democratization of communication has emerged, and it needs to be exploited by NGOs in a strategic and intentional manner. NGOs need to learn to expand the repository of tools available with them and go with the trends rather than lamenting the changes occurring in the world around them. One needs to understand the medium and the audience and learn how to capsulate content by making it both interesting and entertaining. It is not about reducing the seriousness of development issues but about making it a priority for the viewer/reader.

The current COVID crisis should be seen as an opportunity for doing this. One has to learn how to repurpose information and build narratives of development around this issue. From climate justice to human lifestyles, from economic policies to social safety nets, from profit maximization to benefit optimization, from the role of the public sector to making capitalism compassionate, from growing inequities to ensuring value for all stakeholders — this would be the ideal time for NGOs to start voicing their development concerns in a manner that combines the power of evidence and emotive presentation.

One needs to begin focusing on three major elements — creating awareness of the issue or problem, backing it with the credibility to be speaking on the issue, and goading the audience into concrete action that can be undertaken both at an individual and community level. It is about narrating the issue in a manner that does not overwhelm or paralyze the reader but offers pragmatic solutions and spreads hope. Practical options for doing this include writing blogs, books, columns in mainstream media, learning to use social media intelligently, and building in-house strategic communication capabilities. Today’s technology offers options that have very little or no cost of production and NGOs need to learn how to maximize the power of audio, video and written material.

The time has come for development journalism to be integral to the functions of an NGO and not be sought as a service from professional journalists alone. Several problems today have their root cause in the asymmetry of information leading to the asymmetry of power and solutions for these cannot be achieved only by NGOs engaged in service activities. It can happen only when one evolves into being a provider of credible, authentic and evidential information to all stakeholders of development, getting them to engage in issues that resonate with the current times and finally empower them to be part of the solution rather than being mere spectators of development events occurring around them.

If the earlier NGO narrative was about being in the news, the current mandate should be on democratizing information, enlightening stakeholders, engaging communities, and creating a society of empowered citizens. And when development journalism evolves into this, then one can hope that the ‘voice’ will drown out the ‘noise’.