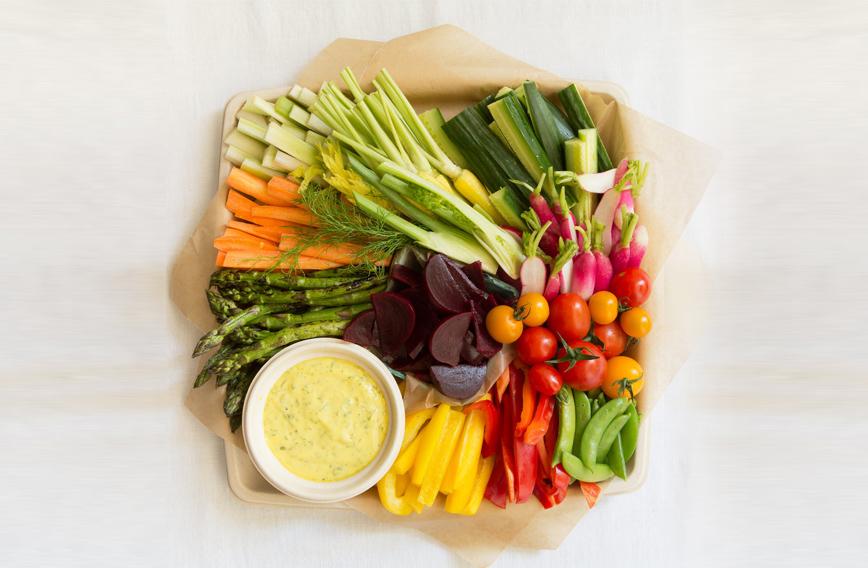 Water on my plate 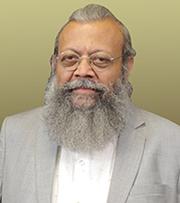 I have always found it attractive to look at individualized solutions to global problems. After all, it makes much more sense if one can oneself, without any coordination with anyone else, change the world! It also gives one a competitive advantage — for being part of the solution.

Indeed, all changes in the end are but individual changes. And before I go further, I must also credit the theory that individual changes or nudges, though necessary, are NOT going to be enough. Financial institutions, governments and businesses need to change the way they operate to change the world. But what better way to do that other than all individuals in governments and businesses changing these institutions from the inside?

When it came to my personal carbon footprint (readers can calculate theirs at www.footprintcalculator.org/), as an affluent resident of India, I had a high footprint. It would require some four Earths to sustain my lifestyle for everyone on Earth. But it wasn't  as high as the average US citizen’s whose carbon footprint is about five times mine!

However, energy, it can be argued, can be bought with money, and if you are concerned about renewable energy versus fossil fuels, the former too can be installed by increasingly investing in renewable energy so that one can hope to be net energy neutral in their energy footprint at some point in the future. This would still require some limits to the energy consumed by all individuals, but at least it is achievable.

With water it is different. And India is water-short. It is more water-stressed than energy-short. The primary reason is that we are a populous nation. According to research, our fresh water resource use can be factored as: 80 percent agriculture/livestock, 15 percent industrial, and 5 percent domestic (includes offices and schools).

If we take three-quarters of the 5 percent domestic consumption, and save even 25 percent of that by bathing and washing more frugally, or by recycling, we end up saving just about one percent of our total national endowment. Only!

If, however, we address agriculture/livestock and change our food choices to make even a small dent in our demand for agricultural products, we can easily make an eight percent difference with even a 10 percent downward change in the water consumed for producing food that we eat.

So what would I need to do to make that difference? Turns out, it’s not that hard to do. 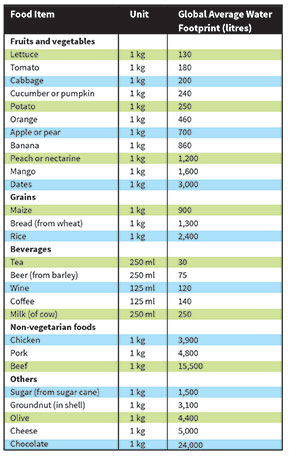 Professor Arjen Y. Hoekstra, Twente Water Centre, University of Twente, the Netherlands, creator of the water footprint concept, introduced supply-chain thinking in water management. With the development of Water Footprint Assessment he laid the foundation of a new interdisciplinary research field, addressing the relationship between water management, consumption and trade.

And what were his findings? Though the concept is complex, since there are various qualities of water used in agriculture (Hoekstra called these “green, blue and grey water”) he was nevertheless able to arrive at a global average for most foods, and this is tabulated in ascending order of water footprint for various food categories.

You can see that vegetables and fruits (other than mangoes, nectarines and dates) consume less than 1,000 litres of water for putting one kg on your plate. This is unbelievably high, and explains why 80 percent of our national endowment is used in agriculture/livestock.

The next category is grains, where wheat is better than rice, but maize (and millets) are best, though still much higher than fruits and vegetables. As for beverages, tea is better than coffee, especially if un-sugared. Beer and wine are good. Milk has to be had in moderation to qualify as a low water footprint beverage.

Clearly, non-vegetarian foods have a very high water footprint! The redder the meat, the more water it consumes. It takes a whopping 15,500 litres of water to make 1 kg of beef! No wonder Americans are such huge water wasters, and this might also explain why India, an endemically water-short country, seems to have naturally gravitated towards an avoidance of beef, even though it creates unintended consequences.

For the record, sheep consumes 10,400 litres, and goat 5,500 litres for each kilo of food. The global average water footprint of a kg of chicken eggs is 3,300 litres, while the water footprint of a kg of cow milk amounts to 1,000 litres. It goes without saying that these non-vegetarian foods are also not great for our health. Nor are they considered essential in any sustainable future diet.

Quite predictably, the “other” foods are neither good for your health nor for water consumption: while sugar is the lowest in this category, it consumes almost as much water to make one kg of sugar as it does to grow one kg of mangoes! And the figures become alarmingly high for other condiments, with chocolate topping the table at 24,000 kg of water or one kg of chocolate!

But this brings me to the power that I had to control my water footprint. All that I needed to do, and it wasn’t very difficult, was to become a vegetarian!  I turned vegetarian in 2003, and remain largely so. I take it that I have probably reduced my water footprint by a factor of at least six percent (my share) of the national endowment. I didn’t really have (much) beef before, but I have now given up mutton, chicken, sugar, and milk but not coffee and — some — chocolate, which I love as my guilty pleasure.

Voila! I have probably saved more fresh water (as a proportion of the national endowment) than any amount of low-flow showers, or dual flushing systems, or turning the tap off could have accomplished. I may be a drop in a larger ocean but then little drops make an ocean.